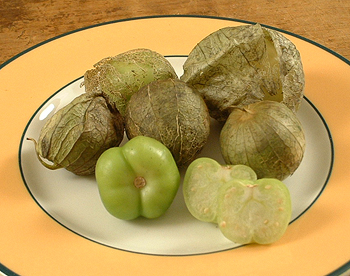 A Tomatillo is a small, green tomato, about the size of a cherry tomato, inside a brown husk. Tomatillos are close cousins to tomatoes, but unlike tomatoes, they are valued for their tart rather than sweet flavour. Their taste is halfway between that of a green tomato and a sour apple.

If you are having a hard time picturing what a tomatillo would look like, and know what a Chinese Lantern Plant is, it looks like that, except that tomatillo husks don’t puff up as much, don’t develop the red orange colour that Chinese Lanterns are prized for by gardeners, and the fruit of the Chinese Lantern, also orange, is tasteless and useless for cooking. Tomatillos also look a good deal like Cape Gooseberries, to which they are also related (Cape Gooseberries have the same husk, but are smaller and sweet.)

Tomatillos are grown throughout Central America and are used a lot in Mexican cooking. The husk feels like rough brown paper, such as that used for a grocery bag, and can be pale green or light brown or mottled hues of both colours. The husk will start to “burst” and separate from the green tomato inside when the tomatillos are ready to harvest. Inside a tomatillo’s green skin, the flesh is white and less watery than that of a tomato.

Like tomatoes, tomatillos are a fruit that is treated like a vegetable. They are used in salsas, often in combination with chiles to provide relief from the hot flavour. They are also used in salads, and in guacamole dip (our versions of guacamole generally call for tomatoes, which is in effect a substitution for the tomatillos.)

When you are buying fresh tomatillos, you want firm ones — the opposite of when you buy tomatoes. Inside the husk you want to see green fruit — yellow means it is too ripe and much of the tangy flavour will be gone. The smaller the tomatillo, the better it is. The husk should still be supple, not shrivelled and dried out. The fruit will feel sticky under their husks; that is normal. Don’t buy any whose husks are black (that is mildew.)

For recipes that have you cook tomatillos, you can also buy them tinned and already cooked.

Some people think, incorrectly, that a tomatillo is the same thing as a Ground Cherry. Ground Cherry is another word for a Cape Gooseberry.

To prepare tomatillos, remove the husks. Rinse the stickiness off the fruit. Chop as directed — tomatillos don’t need to be peeled, or seeded. Some recipes will have you use them uncooked; others will have you cook them — often, by steaming them in a small amount of water in a saucepan for a little over 5 minutes.

Green tomatoes, with a bit of lemon or lime juice added to give the extra tartness that a tomatillo would

Excellent source of vitamins C and A.

Refrigerate in their husks for up to a month in a paper bag (if you can’t get paper bags, try those new perforated salad storage bags, or wrap in newspaper). Discard any that turn to yellow, as they will have ripened too much and not have much flavour; obviously, also discard any that start to rot.

Archaeologists believe that people were using tomatillos in Central America possibly as early as 900 BC.

The Spanish brought tomatillos to Europe, along with tomatoes, but tomatoes became more popular and tomatillos didn’t catch on at all.