Contents hide
Tunnock’s Snowballs are a round ball of soft, foamy, glossy marshmallow that is dipped in chocolate and coated with white shredded coconut.

The marshmallow is made with egg white and syrup.

The snowballs are similar to Tunnock’s Teacakes, but minus the shortbread base, and with the addition of the coconut covering.

The Canadian province of Newfoundland is a large importer of the cookies.

Tunnock’s Snowballs were invented in 1952. 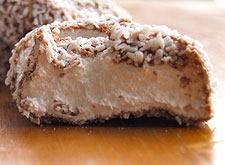 The actress Cate Blanchett is a fan of Tunnock’s Snowballs.

In 2009, Scottish author Craig McGill wrote a poem dedicated to Tunnock’s Snowballs, in thanks for the large donation that Tunnock’s made to support the Robert Burns Birthplace Museum that would open in 2010:

Fair fa’ coconut sprinkled face,
Great chieftain o the teacake-race!
Aboon them a’ ye tak your place,
mallow, choc, or cream:
Weel are ye wordy of a grace
As lang’s my arm.