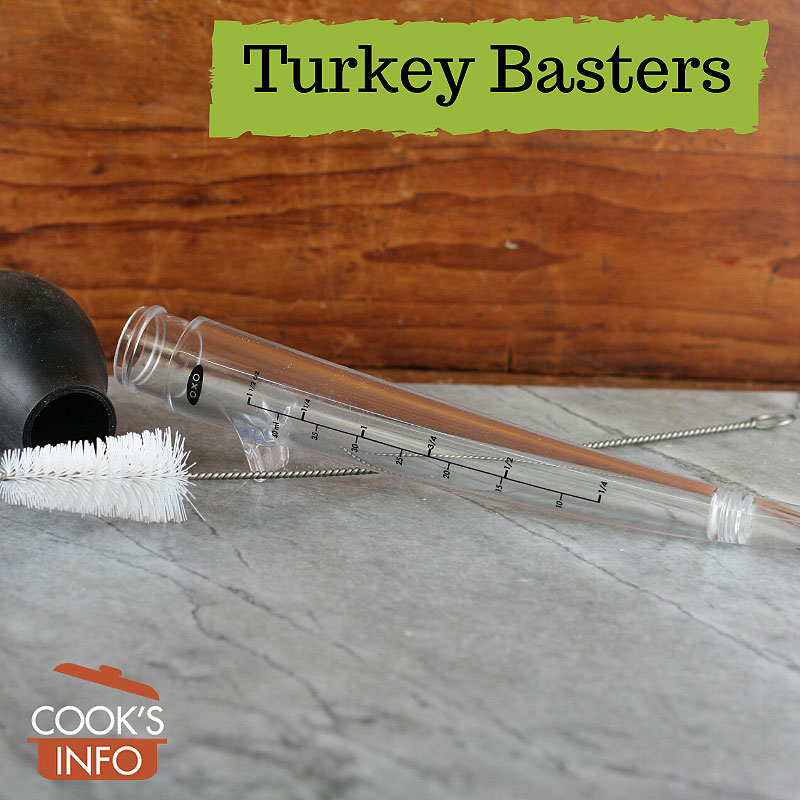 A turkey baster (aka bulb baster) is a tool designed to suction juices up from the bottom of a roasting pan, and then release those juices back out onto the joint of meat that is being roasted.

Though these tools used to be more formally called “bulb basters”, the name “turkey basters” seems to have won out because they are largely used for the big American holidays such as Thanksgiving and Christmas when turkeys are more likely to be roasted.

The design of turkey basters

The basic design is the same for almost all turkey basters. It consists of a large “rubber” bulb attached to a long tube with a tip at the other end.

The tubes can be made of glass, a metal such as stainless steel, nylon or silicone. The bulbs can be made of rubber, latex or silicone. Some bulbs are better than others as some won’t suck up much liquid, while others will cause the liquid to release out before you are ready. Some models have a “valve” in the end that helps prevent juices in the tube from exiting the tube until you have clearly indicated you want to squeeze them back out.

Some tubes such as metal ones, and some opaque plastic ones, are not transparent, which makes it hard to see how much liquid you have sucked up. The opaque plastic ones are usually cheaper and not as heat-resistant as the clear plastic ones. The upside to stainless steel is that it won’t discolour over time, it can withstand very high temperatures, and it won’t crack

While glass is transparent, it can crack or break, either through dropping or from thermal shock if it goes from cold to extreme hot grease heat suddenly.

Most models are dishwasher safe, though you should check the packaging to be sure if that is important to you. Most will say they are top-rack or cutlery tray safe.

Some models are “roll-resistant”; that means they have some feature that prevents them from rolling off the kitchen counter when you lay them down. Typically, this can mean a flat edge moulded into the bulb or attacked to some part of the tube.

The lengths of the tubes vary, with typical consumer ones averaging about 30 cm (12 inches), but specialty longer ones up to 45 cm (18) inches are available.

The tubes will hold varying capacities, depending on their length and width, from 45 to 90 ml (1.5 ounces to 3 ounces). Capacity volume in practice will depend a lot on the size of the bulb, which determines how much the bulb is able to suck up into the tube. Some bulbs have a larger capacity than others. You can almost never get any tube completely full. The best you’ll do is ½ to ¾ full. Poor bulbs might only be able to suck up enough liquid to get the tube ¼ full.

Some tubes have no measurement markings on them, particularly those made of metal, and cheaper ones.

Better-quality clear tubes are more likely to have measurement markings on them to help you measure how much liquid you have drawn up into the tube. The markings will be in US and in metric. It is probably best not to count on those markings as having clinical accuracy, but the accuracy should be close enough for home kitchen purposes.

When buying a baster, to see how a bulb feels, see if there’s an oven mitt nearby in the store that you can try it with to see how easy you can manage it. Make sure you get one that is dishwasher safe, if that is important to you.

Parts and accessories for turkey basters

Most turkey basters are only two pieces, the bulb and the tube. The bulb detaches from the tube so that the insides of both can be gotten at for cleaning.

Some come with more than just two pieces. Some of these, such as one model from OXO good grips, have a two-piece bulb. User reviews on basters with more than two pieces have been decidedly mixed, with some people saying they are overly complex.

Others might have a tip that screws onto the end of the tube. The tip can be a curved plastic one to direct the flow of liquid out at an angle, or a one that looks like a small paint brush to brush the juices on, or one that acts as a “shower head” to spray the liquid out in a dispersed spray. Or, the tip might be a metal “needle” called an “injector needle”to pierce a food object and inject liquid deep into it.

It is probably best not to assume that the tip attachments are interchangeable between different makes of basters.

Owners of turkey basters whose tube is made of metal or glass can find over a few decades that the tube outlives the bulb, and sometimes  ask about purchasing a replacement bulb. CooksInfo has not as of yet seen a retail source selling single replacement bulbs; another issue would be ensuring that it happened to fit your model snugly.

Cleaning up a turkey baster can involve getting grease off the inside surface of the tube. Better models of turkey basters will come with their own clean-up brush for cleaning the tube.  The ones that come with brushes usually come packaged with the brush inside the tube — remove this brush before using. Most people usually end up storing the brush separately, rather than inside the tube, as it is useful as a bottle brush.

If a turkey baster doesn’t come with its own cleaning brush, you could shop for thin bottle brushes or test tube cleaners to use. Or, twist up a piece of paper towel tightly, insert it into tube, and rotate it.

Basters are easy to wash. Just detach the bulb, and put both parts in the dishwasher. In North America, if you’re putting a plastic tube or the bulb in the bottom rack, make sure it’s not near the heating element. To be safe, put it in the top rack or in a door cutlery caddy (if the bulb will fit.) Put the bulb in facing downwards; stand the tube up on a post in the dishwasher drawer.

When clean, let the bulb and the tube dry separately, and then put them both back together and store. A few models have flat ends on the bulb, so you can store them standing up. These are also handy, because in between bastings, you can stand them up instead of laying them down sideways. This ensures they won’t roll off the counter or leak juices out on the counter top.

It is best not to sit a baster on the stovetop between bastings as it may melt.

Other food uses for turkey basters

Other non-food uses for turkey basters

Please note that if you intend to use a baster for non-food uses, then you should buy for those purposes a second one that you don’t use in the kitchen.

This web site generates income from affiliated links and ads at no cost to you to fund continued research · Information on this site is Copyright © 2023· Feel free to cite correctly, but copying whole pages for your website is content theft and will be DCMA'd.
Tagged With: Meat Cooking Tools, Roasting, Roasting Meat