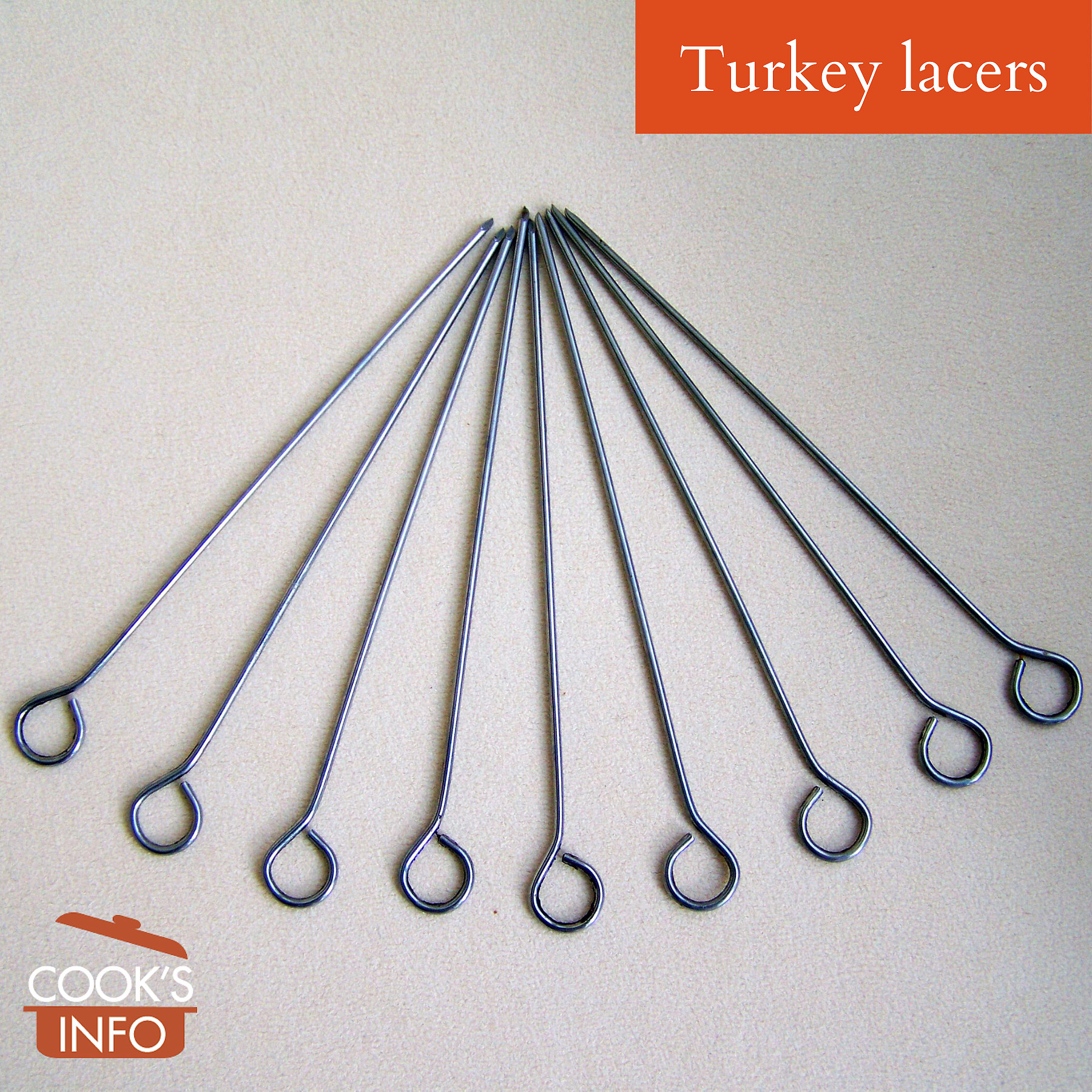 Turkey lacers are thin needles about 11 cm (4 ½ inches) long that are sharply pointed at one end with a large eye hook at the other end.

They are used in combination with thin butcher string to close and hold shut the neck cavity of poultry that has been stuffed. The purpose is to keep all the stuffing inside the bird by preventing it from falling out, and also to keep the stuffing moist by avoiding a wide, exposed surface of the stuffing that would go brown and crispy.

Turkey lacers are very inexpensive. They are usually sold in packs of 6, 8 or 10. Most packs include enough butcher string for your first time out. The butcher string acts as the actual “lace”, as it were.

Some lacers are sold in tubes which can be used to store them in. If not, place them all in a small plastic sealable bag and store them like that. That will prevent them from wandering off one by one into cracks of drawers, as they have a tendency to.

Though they’re called “turkey lacers”, they can of course be used with other birds as well (such as chicken, capon, pheasant, etc.) Consequently, they’re sometimes referred to as “poultry lacers.”

How to use turkey lacers

Some people recommend placing a piece of a heel of bread on top the exposed dressing in the neck cavity before beginning, so that your stuffing gets completely protected from the dry air in the oven.

Insert the turkey lacer needles at various strategic places around the cavity, with the eye ends protruding. Then, thread a piece of thin butcher’s string through the eyes. Then, pull the string tight to draw the needles all together, closing the cavity.

When the poultry is cooked and has had a short resting time, you pull the needles out and then get on with serving the bird and the stuffing.

If you stand the used lacers immediately in a glass of water to soak, it will make wash-up of them easier at the end of the meal. Discard the used butcher string in compost.

Most people recommend washing turkey lacers by hand, and it’s probably best to do that: not because they’re expensive to replace, but because they do tend to get tossed around inside the dishwasher, and end up on the bottom in hard to get at nooks and crannies that will have you afterwards cursing on your knees with your head stuck in the dishwasher trying to find them.

Cover the end of the turkey where the stuffing is with a piece tin foil just large enough to cover the opening, without covering any of the surface of the bird (so that you don’t stop it browning.) Or, sew shut the old-fashioned way, with a large needle and heavy thread. Or, do nothing, and serve the browned, crispy bits of stuffing at the end to those people that enjoy some crispy bits.

This web site generates income from affiliated links and ads at no cost to you to fund continued research · Information on this site is Copyright © 2022· Feel free to cite correctly, but copying whole pages for your website is content theft and will be DCMA'd.
Tagged With: Meat Cooking Tools, Roasting Meat, Stuffing, Turkeys