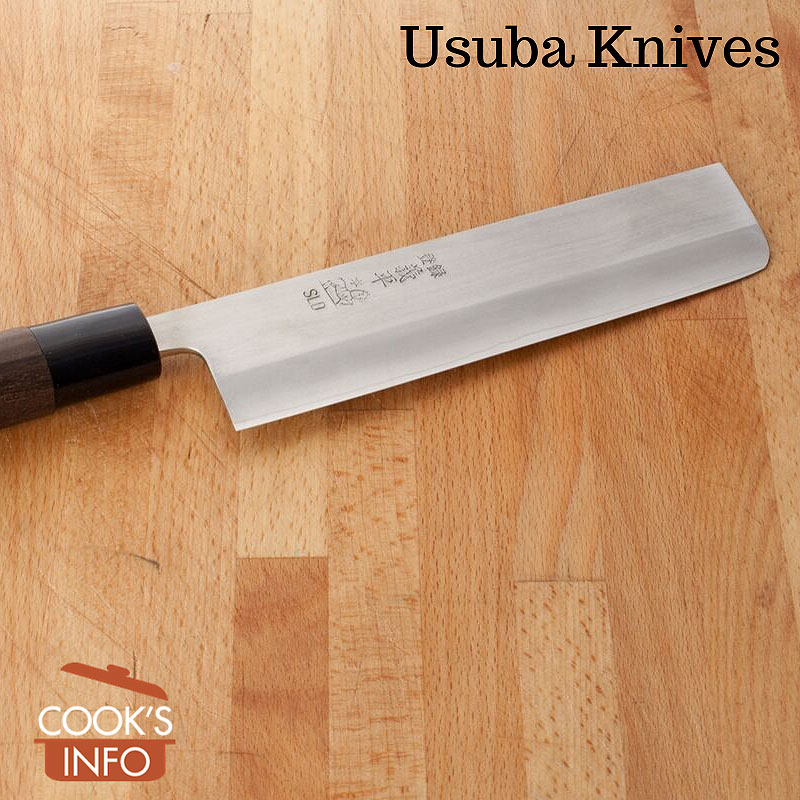 An Usuba Bocho (aka Azumagata Usuba, aka Kakugata usuba. Japanese: 薄刃) is the Japanese version of a Chinese cleaver.

It is a thin-bladed knife designed to cut through vegetables and fruits without crushing the cells, which can lead to discoloration and loss of texture. The knife can make paper-thin slices.

It is largely used in restaurants rather than homes.

Design of the usuba knife

The squarish blade is less broad than a Chinese cleaver, and overall the knife is closer in size to a French chef’s knife.

The cutting edge is completely straight and sharpened only on one edge.

There are three slight variations, differentiated by the end of the knife blade:

The “Azumagata” version, aka Kakugata usuba, has a completely flat nose. It is very square at its end, like a half-size cleaver. It originated in Kyushu region. “[Azumagata] Usuba hocho is a suitable for cutting vegetables. Azumagata meaning is Eastern type and Bushi type. Azumagata Usuba hocho used by eastern Japan region, for example Tokyo (Edo) … This 210 mm edge is a normal size. If you want cut hard or large vegetables, we recomended 225 mm one. If you want a fine work, we recommend the 195 mm one.” [1]Azumagata Usuba hocho 210mm. Nishi-ku, Yokohama: Tetsufuku. Accessed October 2019 at https://www.tetsufuku.com/product/166; 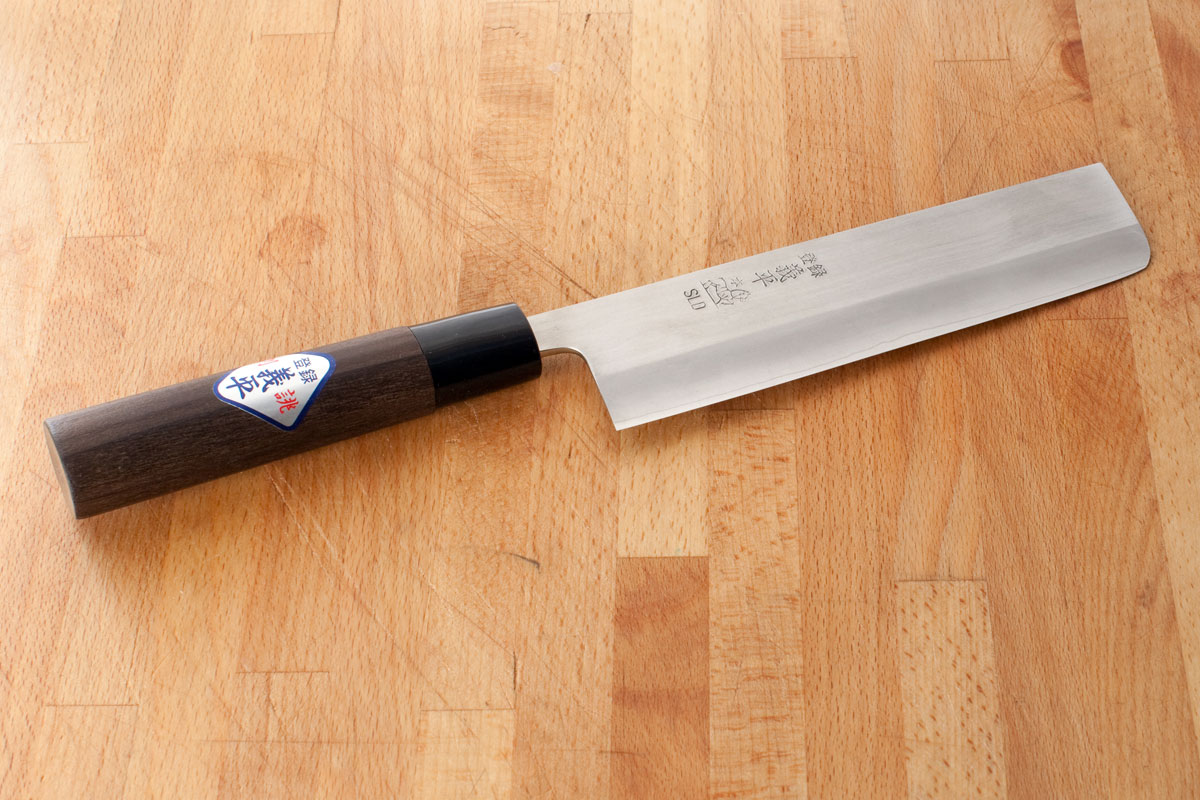 The “Kama Usuba” version has a slight tapering starting halfway down the nose of the knife.

It originated in the Kansai region.

“The Kama Usuba has a Kamagata (Literally, “sickle-shaped”) tip, or ’Sheepsfoot’ blade profile. It originated in the Kansai (Ōsaka) region of Japan and it is often preferred to the square-ended Usubas from the Kanto (Tokyo) region because the curved tip is more versatile. It is particularly useful for precision cutting and decorative cutting techniques… [such as] Kazari-giri (“Decorative cutting”)” [2]Kama Usuba. Seki-City, Gifu Prefecture, Japan: Kencrest Corporation. Accessed October 2019 at https://japanesechefsknife.com/collections/kama-usuba/high-carbon-stainless-steel

The “Hishigata” version (aka Higashita) has an angled point. Originated in the Kanto region.

Chris Lehrer, a Japanese knife enthusiast and frequent writer on the topic, gives his take on the pros and cons of usuba knives:

Cons: Very expensive. Hard to learn. Must be hand-sharpened: your hardware store or almost any machine will do damage. Easy to damage. Poor at slicing. Useless for anything but vegetables. Must be “opened” (sharpened for the first time) by an expert.” [3]Lehrer, Chris. The Best Kitchen Knives: A Complete Guide to Creating Your Perfect Set. Knifeplanet.com. 4 April 2017. Accessed October 2019 at https://www.knifeplanet.net/best-kitchen-knives/

He goes into further detail about the sharpening obligations that come with an usuba knife:

“If you’re considering an usuba, recognize that it will cost a lot, and you’re going to need good sharpening stones. You’ve got several months of pain and suffering ahead of you: this knife can only be used in its own strange way, and any deviation will cause chipping at best, plus nasty wounds. You’re going to reshape that blade several times on coarse stones, because you’re going to chip it badly. In the end, if you fall in love, you’re going to buy a new one to replace the one you learned on. So if you’re not already serious about sharpening, an usuba choice is going to set you back something on the order of $1000, between two knives and an assortment of excellent bench stones….” [4]Ibid.

This video demonstrates the use of an Azumagata Usuba knife.

This web site generates income from affiliated links and ads at no cost to you to fund continued research · Information on this site is Copyright © 2022· Feel free to cite correctly, but copying whole pages for your website is content theft and will be DCMA'd.
Tagged With: Japanese Knives