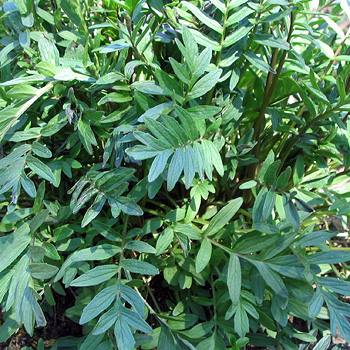 Valerian is a perennial herb that grows 2 to 5 feet (60 cm to 1 ½ metres ) tall, closely related to Lamb’s Lettuce.

It spreads through dividing roots, by suckers or by seed. The tiny white or pale pink flowers appear in the spring in clusters 3 to 4 inches (8 to 10 cm) wide.

Valerian used to be grown for properties ascribed to its roots which included:

It was the root that was used. The flowers were cut off before they developed to preserve energy for the roots. The roots were dug up in the fall, washed and dried/

Many medical attributes are still attributed to it, including being a sedative, relieving headaches and depression, bringing down blood pressure, etc.

A cold tea can be made from the chopped root (about 1 teaspoon of chopped root per 1 cup / 8 oz / 250 ml of cold water, allowed to steep overnight.)

The essential oil from the root used in some herbal teas.

Valerian is native to Europe and Asia; naturalized in North America. It is now grown mostly as a garden ornamental.