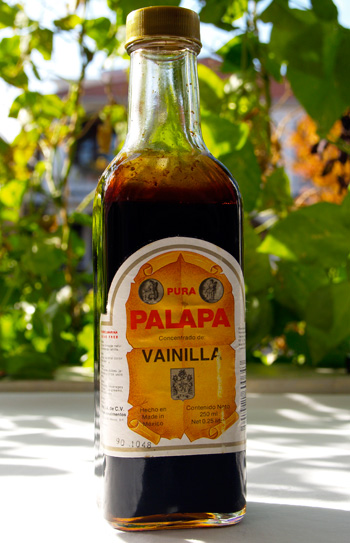 Vanilla Extract
© Denzil Green
Contents hide
There are over 30,000 different kinds of orchids in the world, yet only one kind produces something edible, which is the vanilla plant. It is a thick climbing vine, native to Mexico. The vine, now grown on plantations, produces yellowy-green flowers once a year, which are hand pollinated. The blooms last just one day; so workers must work fast. (In case you’re wondering how vanilla survived without man, in Mexico there are some ants and a certain bee that would do the pollination work; but there are not enough of these for the number of plantations there are now in Mexico, and these insects, being only in Mexico, aren’t available around the world where vanilla is now grown.)

Then within about 6 weeks, the vines will have produced long, green pods which are at this point about at their “finished” length, but are still immature: the pods need about nine months on the vine to be ready to harvest. They are ready to harvest when the pods have turned yellow or gold at their tips. Even at that point, they are still unripe, but that’s how they are harvested.

If you tasted a bean inside a pod at this point, it would have no flavour. The beans have to be “cured” to bring out the vanilla taste. The compound “vanillin” inside the beans is bound up with the glucose in the bean; the curing induces an enzyme reaction inside the bean which breaks down the glucose bonds and sets the flavour compounds free. The curing is done in a variety of ways, depending on which region the beans are harvested in, but it usually starts with either blanching or steaming, followed by heating in the sun for a few weeks, followed by several months of drying out. The curing process causes the bean to brown.

Vanilla is now as common in our kitchens as salt and pepper. It is even used in flavouring Coca Cola.

Some purists prefer using only vanilla beans to cook with. If this is a concern to you, you’ll want to ensure that the beans come from Mexico, where the best tasting beans are grown. Sadly, the beans are only grown in extremely limited quantities and are almost never exported.

If you are going to try the beans out for fun, be prepared — they are expensive. At some stores, they aren’t even kept with the other spices: their value is such that they are kept behind the cash register instead.

Look for pods that are shiny, not dried out and dull looking.

Some recipes will have you toss in 3 to 6 cm (an inch or two) of the pod, whole (which you then later fish out after the flavouring has been accomplished). Others will call for just the seeds. You split the bean pod open and scrape the seeds out. You can use the outer pod to flavour sugar, making vanilla sugar.

To make your own vanilla extract, put in a sealable jar 1 cup of plain / 8 oz / 250 ml (flavourless) vodka and 2 vanilla pods, each split in half. Put the top on tight, and let stand for two months in a dark, cool place; every few weeks, give the bottle a bit of a light shake.

Store pods in a dark, cool place in a sealed jar; wrap them in wax paper as well if you wish to help keep humidity off them so they won’t go mouldy. Do not refrigerate as will this cause the beans to dry out and crystallize. If your beans do go dry, plump them up again in a warm liquid from your recipe before using, or use to make vanilla sugar.

Vanilla is native to Central America. The Aztec used vanilla to flavour their chocolate drinks, and to pay their taxes with. After the European conquest, the natives did such a good job of keeping secret the process which brings out the taste of the vanilla beans that processing factories weren’t established in Europe until the end of the 1700’s. Vanilla Extract was invented in 1847. In the mid-1800s, Vanilla plantations were established in Indonesia and other tropical countries such as Madagascar.

Most of the world’s vanilla production today is in these countries outside Mexico, though Mexican vanilla beans are still considered the best. But the Mexican production is so small that little of it leaves the country.

Vanilla, once reserved for Aztec kings and the truly wealthy of Europe, is now so common that “plain vanilla” is an expression meaning ordinary and boring.

Foodies blame this on the affordability of artificial extract, which made the taste available to the likes of the great unwashed like us.