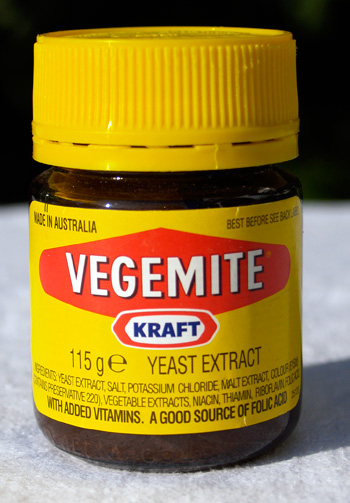 Vegemite is a yeast spread, an Australian competitor to British-made Marmite.

It is a very shiny, very dark, reddish, deep-brown spreadable paste. It is so thick that if you were to tip a jar up, it might take hours or days for it to run out of the jar.

It is salty-tasting, but milder than Marmite. It smells vaguely akin to soy sauce. Detractors say it smells like seaweed gone rancid.

It is present in 90% of the homes in Australia.

Vegemite is made from an extract from yeast leftover after beer making.

The yeast is sieved, then washed to remove bitterness, then put in plain water heated to 98.6 F (37 C.) As the yeast cells die (no food for them has been added to the water), they release minerals and vitamins into the water. Through centrifugal force, the yeast cells are removed, leaving behind the nutrient-rich water, which is then concentrated under vacuum, and seasoned with spices and flavoured with vegetable extracts from vegetables such as celery and onion.

Vegemite can be stirred into soups, stews, gravies, and rice dishes.

Australian bakeries make savoury spiral pastries with cheese and Vegemite in them.

It is mostly, though, used in sandwiches, thinly spread on bread.

The salt content of original recipe was 10%; this has been reduced to 8%.

He was working for the Fred Walker Cheese Company in Melbourne, Australia, which produced cheeses and meats, owned by Fred Walker (1884-1935.)

Marmite had already on the Australian market since 1910, marketed by the “Sanitarium Health Food Company.”

Callister had just joined the company. Walker gave a sample of Marmite to Callister, and asked him to imitate it, which he did. The yeast used was supplied by Carlton & United Breweries in Abbotsford, Melbourne (established 1907, since 1983 owned by Elders Brewing Group, later renamed to Fosters.)

He held a competition for the name, inviting suggestions to be submitted. His daughter (Sheilah) selected from the submissions the name “Vegemite”, and the person who suggested it (name unknown) was awarded 50 Australian pounds. Names she rejected included “Black Fecula” and “Slagamite.”

He launched Vegemite in 1923. It was first sold in 2 oz (56g) amber-coloured glass jars. The label said it was “Pure Vegetable Extract.” He face heavy competition at first from Marmite, the established yeast spread product. Later, when he’d broken into the market, he increased the size offering range to 2, 4, 6, and 8 oz jars, and in tins, 1 pound and 6 pounds.

We are happy little Vegemites as bright as bright can be,

We all enjoy our Vegemite for breakfast, lunch and tea,
Our mummy says we’re growing stronger every single week,
Because we love our Vegemite,
We all adore our Vegemite,
It puts a rose in every cheek!

“Buying bread from a man in Brussels
He was six foot four and full of muscles
I said, “Do you speak-a my language?”
He just smiled and gave me a Vegemite sandwich”