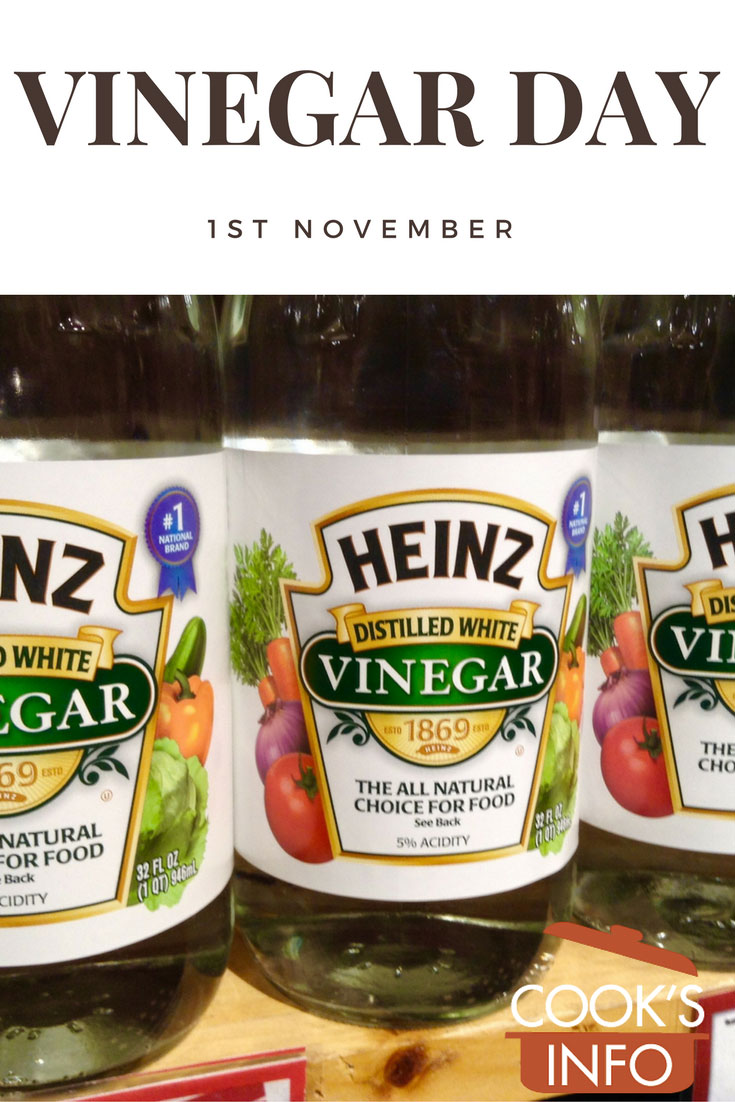 The 1st of November is Vinegar Day.

A day to celebrate an ingredient that we all take for granted — vinegar!

On Vinegar Day, you can hold a vinegar tasting, or make a vinegar pie, or put vinegar on your chips (French fries.) Countries in which vinegar on French fries is considered a given include England, Scotland, Wales, Ireland, Australia, New Zealand and Canada.

In late June, the town of Spilamberto, (near Modena, Emilia-Romagna) in Italy, holds a Balsamic Vinegar Day to promote the locally made balsamic vinegar as part of its St John the Baptist celebrations.

Pro safety tip: When you are using vinegar for home pickling for shelf-stable storage, be sure that the vinegar strength is 5 % or higher, and in general, that the vinegar / water ratio of the brine never has less than 50% vinegar in it unless you are using a modern recipe from a reputable source that has been lab-tested to be safe with a lower amount of vinegar. For more information, see the 50/50 rule.

The 1st of November appears to have the most recognition and backing as being Vinegar Day.

Various newspaper mentions put Vinegar Day on the 16th of June [1]”Today is National Vinegar Day.” — Fremont, Ohio: The News-Messenger. Wednesday, 16 June 2021. Page 2A, col. 4. and on the 31st of December [2]Andersen, Erin. Make a toast to the end of food holidays. Lincoln, Nebraska: Lincoln Journal Star. Page D1, bottom, col. 5 . Leading internet holiday sites, however, place it on the 1st of November. It’s not clear why, or when or how this was decided.

This web site generates income from affiliated links and ads at no cost to you to fund continued research · Information on this site is Copyright © 2022· Feel free to cite correctly, but copying whole pages for your website is content theft and will be DCMA'd.
Tagged With: Vinegar