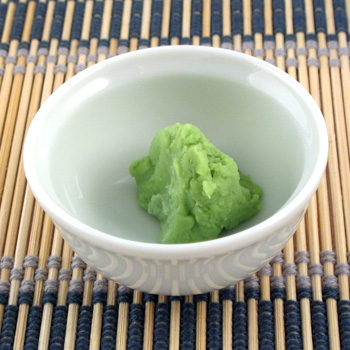 Wasabi is a small perennial green plant that grows in the wild along streams. It is a member of the watercress family.

It will grow about 18 inches (45 cm) tall. It is harvested for its root, which is green inside, after at least two years of growth.

It is also cultivated, usually in water. It has been cultivated since at least 1,000 AD on Honshu (the mainland of Japan), and is now also being cultivated in the United States.

The roots (actually rhizomes) are gathered, dried, ground into a powder, then reconstituted for use as a paste.

The root can also be grated and used fresh and raw. In Japan, a fresh root is sometimes grated against a grater made of sharkskin, which makes the grated Wasabi smooth and soft.

Wasabi has a very hot, sharp flavour with immediate heat that doesn’t linger.

Real, pure Wasabi is expensive, and will be labelled “hon wasabi” or “hon nama wasabi.”

Commercially prepared Wasabi often has other things mixed in to reduce the cost, such as powered, reconstituted regular horseradish, mustard, tapioca starch or cornstarch, and green food colouring, These Wasabi mixes are often more of a lurid green colour.

It is often served with sushi and sashimi.

Despite its heat, Wasabi is not related to horseradish at all.

Use Wasabi in small amounts.

This web site generates income from affiliated links and ads at no cost to you to fund continued research · Information on this site is Copyright © 2022· Feel free to cite correctly, but copying whole pages for your website is content theft and will be DCMA'd.
Tagged With: Horseradish, Japanese, Japanese Food, Pastes