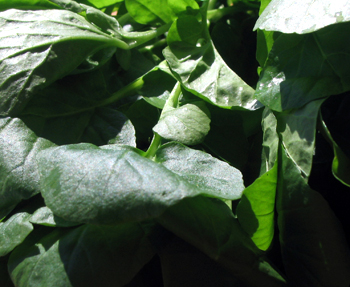 Watercress is a plant whose small leaves are used as a salad green and a garnish.

The leaves have a zippy, peppery flavour which comes from “benzyl” mustard oil in them. It’s great in sandwiches, soups, salads, and makes a great garnish — adding just as much colour and far more interest than parsley. It’s also a nutritional power-house, punching far about its weight.

The Watercress plant is perennial, growing in wet places such as wet meadows, ditches, flat river banks, streams, and springs. It prefers water that is slow-moving: it won’t grow in fast water, and it won’t grow in still water as it needs water that is cleaner than that. Commercial cultivation ensures that it has a constant flow of pure water, so that it doesn’t absorb any impurities or pollution. If you are harvesting it in the wild, don’t confuse it with “fool’s cress”, which has toothed leaves that are longer and paler than Watercress leaves — it’s poisonous.

In supermarkets, Watercress usually has its top leaves wrapped in plastic and its roots in a container of water. In markets, it will be sold in bunches. Look for dark green leaves.

New York City is the largest market for Watercress in North America; Toronto is the second, owing to its popularity in the Asian markets there.

There is also a variety called “Garden Cress” or “Land Cress” which can grown in gardens, as opposed to water. See separate entry on Cress.

Use both the leaves and the stems; just give the stems a light trim at the ends.

Watercress shouldn’t be dried or cooked as all flavour is lost. Generally, you add it last to cooked dishes to preserve the zing, but some soup recipes will have you cook it longer to mellow the taste.

Weight for weight, Watercress has more vitamin C than oranges, more calcium than milk, more iron than spinach, and 150% more folic acid than broccoli. It is high in vitamins A, B, C, folic acid, iron, calcium, potassium and antioxidants.

If you are gathering your own in the wild, be absolutely certain that you know the water it is growing in is pure and free of pollutants. It is thought, for instance, that Watercress growing in typhoid-carrying water helped to spread the disease in previous centuries.

In the wild, a snail that loves Watercress, breeding on it and eating it, can transmit liver fluke to humans. Cultivated Watercress is safer, because growers learned how to eliminate this snail in the 1970s.

Plan to use it up soon after you buy it; if you buy it in bunches, store wrapped in paper towels in a plastic bag in the crisper. Will keep from 3 to 5 days. Other people suggest storing it in a bowl of cold water upside down, with the leaves in the water and the stems sticking out.

You can try growing your own watercress in the kitchen, if you like. Place a few stalks of watercress in a jar of water. Keep it in a place with light until it sprouts fine roots — about 10 to 14 days. Once the roots start to appear, change the water every day. Transfer to a small pot filled with soil, sandy loam or compost and put the pot in a deep saucer of water. Keep the pot out of bright sunlight, preferably partial shade. Change the water daily. In 2 to 3 weeks, you’ll see new leaves appearing on the plant, and it is ready for use. Obviously, whenever you cut off leaves you need, always leave some leaves on to keep the plant alive, so it can produce more. Use often so it will grow more.

The Greeks and Romans used watercress. The Romans thought it gave you a clear mind for decision-making. In Europe, it was one of the few fresh greens available in the wintertime. By 1808, commercial cultivation began in England as demand outstripped supply in the wild. In England, Hampshire came to be and still is the centre of watercress cultivation.

The rail line carrying watercress to the markets in London was called ‘The Watercress Line.’ It was shut down in 1973, being replaced by refrigerated trucks.

Watercress was introduced to North America in the 1700s and thrived. At one point, Huntsville, Alabama called itself the watercress capital of the world.

Watercress was introduced to China in the late 1800s.

There were so many superstitions around watercress because even though people couldn’t do nutritional analyses of it, they could see the beneficial results. Even the Victorians held on to a superstition about watercress: they thought it would cure freckles, hiccups and toothache.

“At the poorest end of the food trade were the watercress sellers. Watercress was a fresh green that many bought daily in penny bundles at breakfast or teatime. There was little profit in it, and the start-up costs were correspondingly small: for a penny outlay a buyer got ‘a full market hand, or as much as I can take hold of at one time without spilling: for threepence you should have a lap full enough to earn about a shilling off.’ Cress sellers were therefore the very young or the very old. Girls started to sell cresses when they were about seven, moving after a few years into more profitable lines. Yet the work was not easy…..The girls arrived at the markets daily by 4 a.m. Buying in the dark, by candlelight or gas, was a skilled job: it was not easy to see whether the produce was fresh, or whether the suppliers were passing off the previous day’s wilted remainders. In winter, the damp produce froze solid on the walk back to town and could no longer be separated into penny bunches, so the new cresses had to be washed under the market pump, before being carefully mixed with the tired cresses left from the day before. The girls then walked back, either to stand in a favoured spot where commuters passed by, or headed for the residential districts, following a regular route, carrying the families’ breakfast greens in a flat, shallow basket on their heads…” — Flanders, Judith. The Victorian City. London: Atlantic Books. 2012. Page 141, talking about London in the 1850s to 1860s.