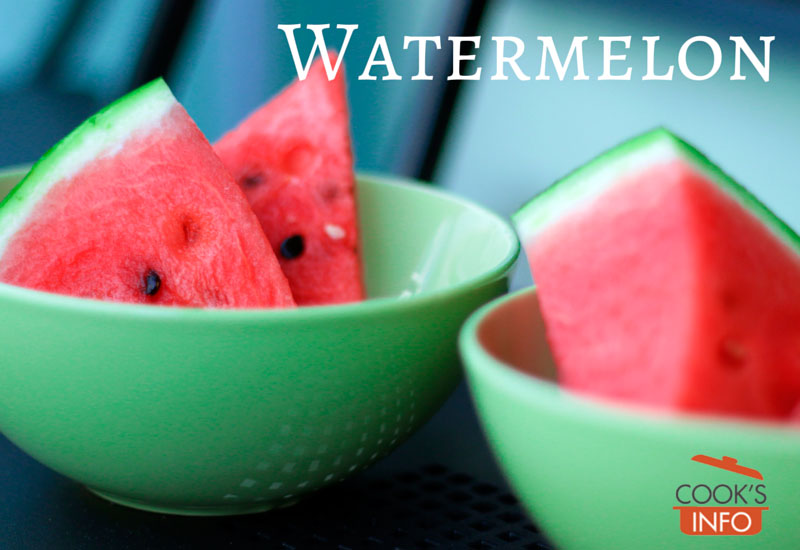 Watermelons are a squash, related to squashes, cucumbers and pumpkins. That technically makes them a vegetable, though we of course treat them as fruit.

They grow on the ground on a vine between 3 to 4.5 metres long along the ground (10 and 15 feet). Though we mostly think of watermelons as red inside, some are yellow. Seeds can be white, brown, black, red, green or speckled.

They may be oval, or round in shape. The Japanese have now bred ones which are practically square, making it easier to pack them for shipping.

The most common varieties sold in North America are usually large, with dark green, mottled skin.

All parts of a watermelon are edible, depending upon your tastes. Some people bake the seeds and eat them; the rind can be pickled.

Bigger watermelons are not necessarily better. They can be less sweet than the smaller ones, and harder to transport without their bursting.

Choose a firm watermelon with a dull rind, free of bruises, that is heavy for its size. It should sound hollow when thumped. 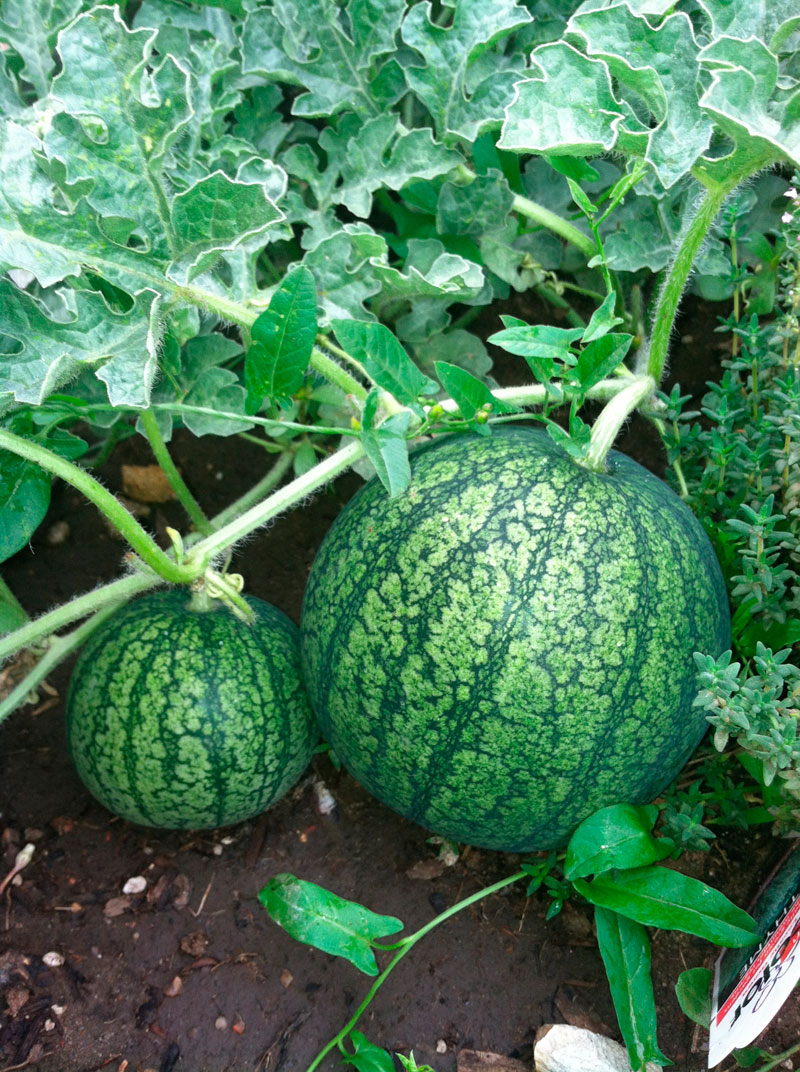 Wash, cut in half, then into thick slices. There are recipes for cooking with watermelon.

Watermelons are a low-acid fruit. Improper home-canning processes for it can and has led to botulism. For  home-canning purposes, only use lab-tested recipes from reputable sources which will have make adjustments for proper acidification. For more information on all this, see our sister site HealthyCanning for Watermelon Jelly, Preserves and Pickles.

Watermelons tend to range from 10 to 13 % sugar (Watermelons with less than 10% sugar content won’t taste “sweet” to the consumer.) Watermelons are around 90% water.

Contains vitamins A, B6 & C; fibre, iron and potassium. Low in sodium.

Contains 15 mg of lycopene per 2 cups. Lycopene is a powerful anti-oxidant. A 2006 U.S. Department of Agriculture study found that storing whole, uncut watermelon at room temperature increased the lycopene present in Watermelon. [1]”Watermelon contains lycopene, a red carotenoid pigment that has strong antioxidant properties. The lycopene content of watermelon is substantial, contributing 8−20 mg per 180 g serving. There are no reports on carotenoid changes in whole watermelon during storage. Three types of watermelon, open-pollinated seeded, hybrid seeded, and seedless types, were stored at 5, 13, and 21 °C for 14 days and flesh color, composition, and carotenoid content were compared to those of fruit not stored. Watermelons stored at 21 °C had increased pH, chroma, and carotenoid content compared to fresh fruit. Compared to fresh fruit, watermelons stored at 21 °C gained 11−40% in lycopene and 50−139% in β-carotene, whereas fruit held at 13 °C changed little in carotenoid content. These results indicate that carotenoid biosynthesis in watermelons can be affected by temperature and storage.” — Carotenoid Changes of Intact Watermelons after Storage. Penelope Perkins-Veazie and, Julie K. Collins. Journal of Agricultural and Food Chemistry 2006 54 (16), 5868-5874. The researchers who did the study recommend that if you want to do this, store the whole, uncut watermelon at room temperature for a maximum of three to four days before using it. [2]”By the time a consumer buys a watermelon, Dr. Collins said, it is usually fully ripe and can be consumed the same day. But if it has not been cut, it can be safely stored at room temperature for three or four days. In that time, its ripeness and nutritional value may increase.” — Bakalar, Nicholas. Nutrition: The Best Watermelon May Not Be the Coldest. New York Times. 1 August 2006.

Keep uncut at room temperature until ripened, then refrigerate for up to 5 days. Cover cut watermelon with plastic film and store for up to 3 days in fridge.

Leftover watermelon can be frozen in small chunks for future use in making blender drinks with.

Watermelon began in central or southern Africa, and was cultivated in India in very early times. By 4000 BC it was grown in Egypt. It is depicted in Egyptian hieroglyphics and was placed in the pharaohs’ tombs.

Apicius, the Roman food writer, gives a recipe called “Pepones et Melones” in which honey melon and watermelon are stewed in sweet wine, with a dash of liquamen (fish sauce).

Some say it came to America with the slave trade; others say the English colonists brought it to Massachusetts in 1629. By the mid-1600s, Indians were growing them in Florida, and French explorers found them being grown in the middle of the continent.

The first American cookbook (by Amelia Simmons, 1796) had a recipe for pickling watermelon rind.

Seedless watermelons were developed in 1949.

“It relates to the first time I ever stole a watermelon; that is, I think it was the first time; anyway, it was right along there somewhere.

I stole it out of a farmer’s wagon while he was waiting on another customer. “Stole” is a harsh term. I withdrew — I retired that watermelon. I carried it to a secluded corner of a lumber-yard. I broke it open. It was green — the greenest watermelon raised in the valley that year. The minute I saw it was green I was sorry, and began to reflect — reflection is the beginning of reform. If you don’t reflect when you commit a crime then that crime is of no use; it might just as well have been committed by some one else: You must reflect or the value is lost; you are not vaccinated against committing it again. I began to reflect. I said to myself: “What ought a boy to do who has stolen a green watermelon? What would George Washington do, the father of his country, the only American who could not tell a lie? What would he do? There is only one right, high, noble thing for any boy to do who has stolen a watermelon of that class he must make restitution; he must restore that stolen property to its rightful owner.” I said I would do it when I made that good resolution. I felt it to be a noble, uplifting obligation. I rose up spiritually stronger and refreshed. I carried that watermelon back — what was left of it — and restored it to the farmer, and made him give me a ripe one in its place.” — Mark Twain.

“The best test for the ripeness of a watermelon is to plug it and take a bite. Not a practical plan from the merchants’ point of view. Thump and listen is the second best test…. A ripe melon emits a muffled sound; the green, a sharp metallic ring.” [3]Clementine Paddleford. In the New York Herald Tribune 1936. As quoted in “Hometown Appetites. Kelly Alexander and Cynthia Harris. New York: Gotham Books. 2008. p 89.” 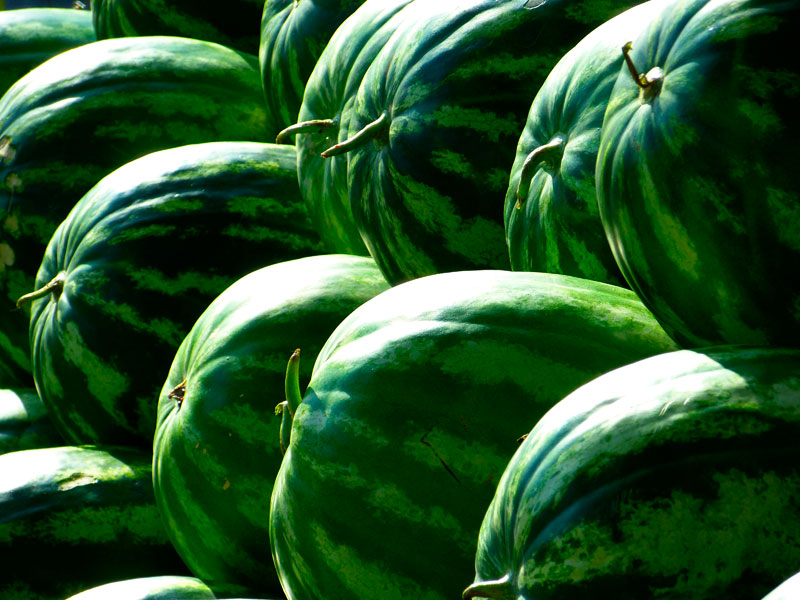 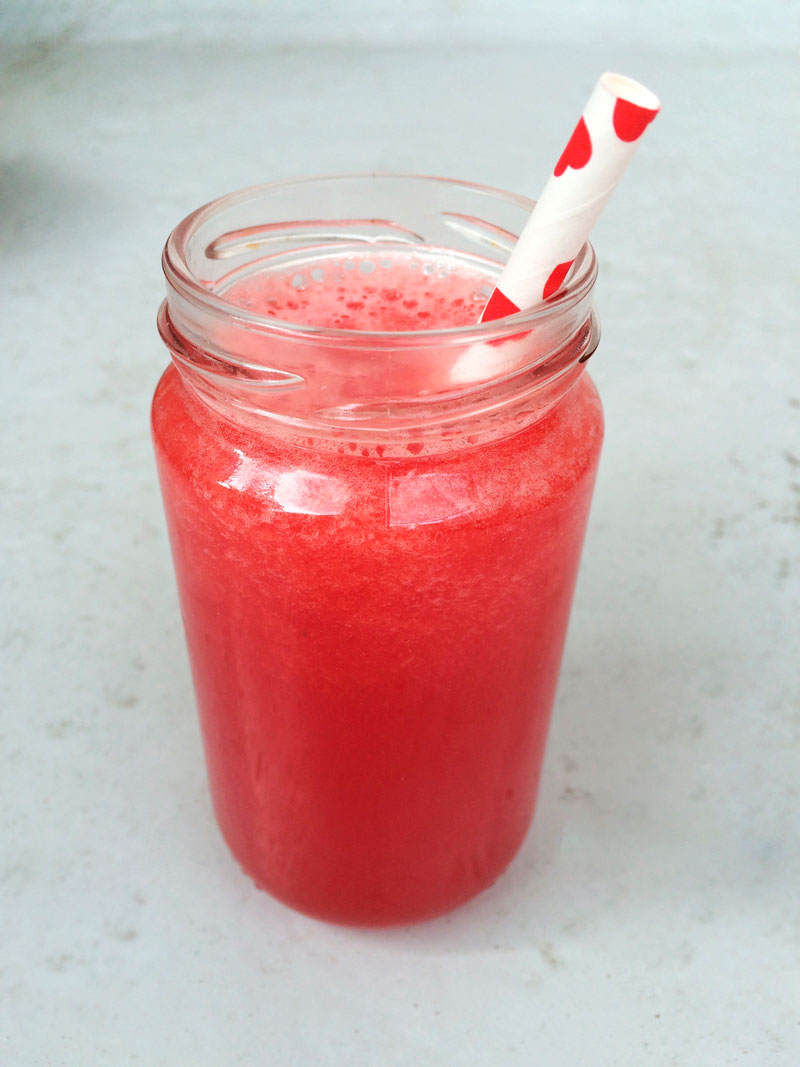 This web site generates income from affiliated links and ads at no cost to you to fund continued research · Information on this site is Copyright © 2023· Feel free to cite correctly, but copying whole pages for your website is content theft and will be DCMA'd.
Tagged With: Ancient Egypt, Ancient Greece