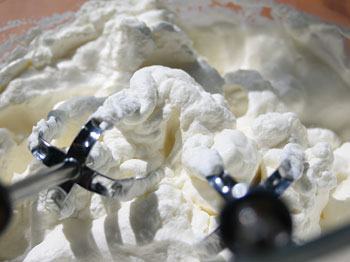 Contents hide
Whipping cream contains between 35 to 40% butterfat. It is extracted from whole milk by whizzing milk around in centrifugal separation tanks. Though the cream is pasteurized, it is not homogenized, as homogenization would impact the ability of the cream to take in air when whipped. When whipped, the cream will basically double in volume.

North Americans will use Whipped Cream as a topping where Brits would reach for a tub of a thick spooning cream.

Whipped Cream gets formed when fat globules cluster together around air bubbles. They then stick to other fat globules on the outside of other air bubbles, and a structure is developed which supports the foam in the cream being whipped.

The cream needs to be chilled. The scientific reason behind this is that fat globules soften in heat (as witnessed by butter left out too long on a hot summer’s day). If the fat globules are too warm, they soften and won’t be able to support the weight of other fat lined bubbles on top of them. The fat globules also come together more readily when cold.

Beat until the cream forms soft peaks, then add a bit of sugar to sweeten, and beat that in just for a few seconds. Always add the sugar after the cream has formed soft peaks, as sugar impedes the beating process (its sharp edges — seriously — cut through the butterfat molecules trying to adhere together around air molecules.) 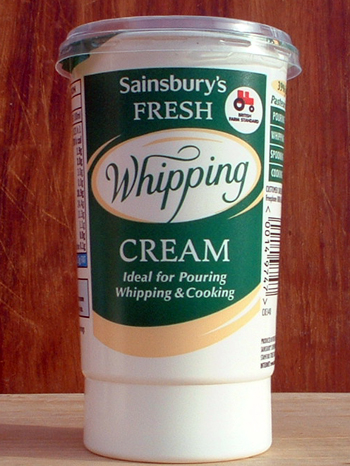 Also try a teaspoon of lemon juice if you have any on hand at the time. Again, add after the whipping is done.

Don’t whip too long. Whipping causes the fat molecules to coat themselves around molecules of air, but when you overwhip, their structure starts to weaken and can no longer hold the air in. If you want Whipped Cream that will stay stable longer, stop beating it before it begins to turn soft and glossy.

Some say chill the bowl and the beaters as well. This is a bit of over-fussing; what’s next, sticking your head in the fridge and doing the whole operation in there?

A swirl of lightly Whipped Cream mixed with fresh herbs is a nice finishing touch on a bowl of soup, hot or cold.

Some people say you can whip chilled evaporated milk with a bit of lemon juice added for a lower-fat substitute, but that might not appeal to all that many people. Instead, try something else as a dessert topping: custard, ice cream, double cream, fresh fruit, apple sauce, syrups, etc.

Can be frozen for up to two months. When you want to use it, barely defrost it until just some ice crystals remain. Don’t let any curdled appearance deceive you; whip it as you usually would, and it will come out beautifully.