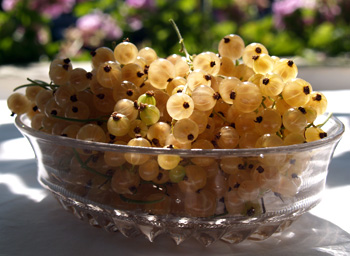 The berries look translucent off-white or golden, and have a less tart flavour than red ones. Some cultivars are even fine for eating fresh out of hand.

The berries grow on one year-old wood, and on new branches coming off older branches.

Some cultivars, such as White Imperial, may have a pink blush to them.

Use a fork to pull them off their stalks.

White Currants can be frozen whole, and used for jelly or juice.

“The wine made from white currants, if rich of fruit, so as to require little sugar, is, when kept to a proper age, of a flavor similar to the Grave and Rhenish wines; and I have known it preferred as a summer table wine.” — Henry Phillips. Pomarium Brittanicum. 1820.