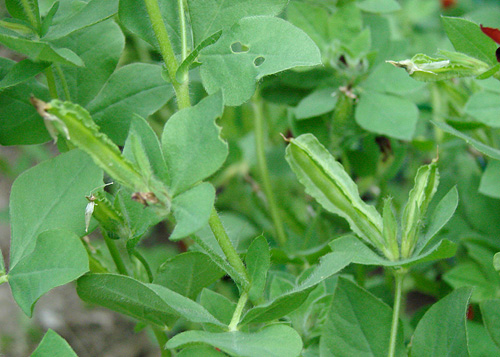 Winged Peas (aka “Asparagus Peas”) grow in four-sided pods, with leaves growing out of each side — thus the name, “Winged.”

They grow on an annual vine that grows 20 to 50 cm (8 to 20 inches) tall. It blooms with red flowers about an inch (2 1/2 cm) big. The flowers are very decorative, and look in shape like the flowers that appear on other pea plants.

The pea pods are light green. They grow 2.5 to 5 cm (1 to 2 inches) long, but are best when picked when 2 1/2 cm (1 inch) long, when they are still very tender. The pods can, however, be allowed to fully mature, and then be harvested and dried so that the peas inside can be used as dried peas. When dried, the peas inside are reddish-brown.

The plant has very low yields.

It is only really grown now in France in home gardens as a heritage vegetable. Elsewhere, it is either grown as a garden ornamental, or as in the UK, just considered a weed.

The pod and its peas is the only part of the plant eaten.

Sauté pods quickly, or add whole to soups or stews. 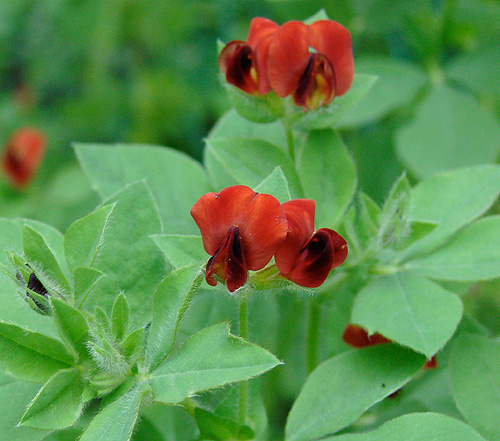 Winged Peas are native to the Mediterranean area.

They probably arrived in Britain in grain imports.

They were being cultivated in Britain before 1560. They never, though, really became popular in Britain as a vegetable.

In Europe, dried Winged Peas used to be ground and used as a coffee substitute.

One of its names, “Asparagus Pea”, is based on the fact that when very fresh and very lightly cooked they have a taste somewhat like asparagus.

Not the same as “Winged Bean”, a tropical bean which is sometimes also called “Asparagus Pea.”