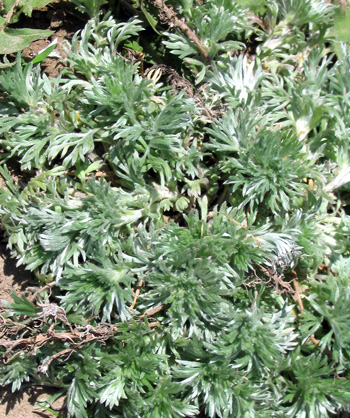 Wormwood is a perennial herb native to Eurasia and northern Africa.

It has woody stalks, and grows up to about 3 feet (1 metre) tall with clusters of silvery-green leaves. It flowers with pale yellow blossoms, also in clusters.

It has a bitter taste; in fact, the only herb more bitter is Rue. Its odor can repel pests from a garden.

Wormwood contains Thujone (also found in the herb Tansy), which can be toxic to the brain and liver in high concentrations. Hallucinations have been blamed on it. Consequently, from 1900 to 1914, there was a wave of laws banning Absinthe in just about every first world country save Britain and Spain. Some researchers have recently suggested that the deleterious effects of Absinthe didn’t have much to do with the Wormwood, as the level of it in Absinthe turned out to not be very high after all, but rather had a lot to do with the 60% to 85% alcohol that some Absinthes were.

[1] Note that the German name for Wormwood is “Wermut” or “wermuota” in Old High German.

In Middle English, “wermode”, likely alluding to its use as a folk cure for intestinal worms.