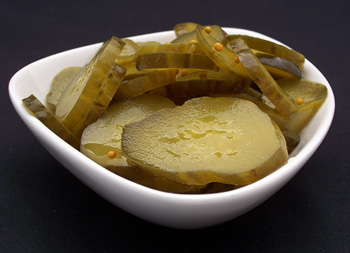 Yum Yum Pickles are made from thinly-sliced cucumbers preserved in vinegar and sugar. Some home recipes add other ingredients such as onion and green pepper. Seasoning can include mustard seed, cloves, ground turmeric, and celery seed.

They are crisp and sweet, with a touch of sour, making them a good introduction for children to pickled foods.

The difference is that Yum Yum Pickles are far sweeter. [1] Home recipes usually call for double the amount of sugar as goes into bread and butter pickles, such as 6 cups of sugar for the Yum Yums, versus 3 cups for the bread and butter.

A popular brand in Canada is that made by the company called Bick’s®. Seasoning for the Bick’s brand includes mustard seed.

Chopped Yum Yum Pickles can be added to bound salads such as pasta and potato salads. The juice can be used for braising or marinating pork in.

When making Yum Yum Pickles at home, you can use a food processor to do the slicing of the cucumbers.

“Yum Yum Pickles as Good as They Sound. Yum Yum pickles, mixed pickles preserved, sweet, spicy, flavory, just the item to “whet” your appetite, in bottles of three sizes.” “If you like sweet pickles, here is a palate-tickler. Baytle’s “Yum Yum” pickles, preserved in heavy liquid, and spices.” — Advertisements placed by Lutey’s Grocery Store in the Anaconda Standard. Anaconda, Montana. (9 April 1906, Page 11 and 31 May 1906, Page 9.)

“Richelieu Yum Yum Pickles. Imitated by many, but equaled by none.” — Advertisement. The Bismarck Tribune. North Dakota. 20 August 1926

Tribune Expert Replies to Many Requests Received From Column Readers By MARTHA LEE
SO many requests have come in for easy cucumber pickles, that I have selected some for today’s column. All commercial vinegar should be diluted one-third to one-half with fresh water before using on pickles. [ED note 2010: Note this dilution instruction is in reference to vinegar being sold in 1936; disregard for the vinegar now commercially being sold today.]

Place the above ingredients in layers in salt water and let stand for 3 hours. Drain and add:

While you’ve got the preserving jars out, here is the pickle recipe you requested, S.K. It was sent in by Mrs. St, J.:

“These small, imitation bread and butter or yum-yum pickles that provide the greenery for most sandwiches and burgers, taste as if they have been pickled in a combination of formaldehyde and limburger. We’ve never ingested this mixture, but our imagination tells us it would be vile.” — Morris, John A.H. Hail the vile little pickle that adorns your plate but is seldom eaten. Prescott, Ontario. The Prescott Journal. 12 December 2001.

The term Yum Yum has been in common use for pickles since at least 1900. In Canada, the Bicks company (established in the 1950s) writes Yum Yum as Yum Yum®, seemingly indicating that they somehow obtained a trademark on a common use food term. In America, Yum-Yum is trademarked in the state of Nebraska by the Yum-Yum Sandwich Hut in Lincoln, Nebraska for a meat sandwich.

[1] “Thank you for your inquiry regarding Bick’s Bread & Butter and YumYum pickles. Both varieties are packed fresh, directly from the field to the Bick’s plant, and are cut into vertical slices called ‘chips’. The difference between them lies in the Brix, or sweetness, level between the two varieties. Yum Yum pickles have a higher Brix rating, and hence a sweeter flavour, than Bread & Butter pickles.” — Probert, Chery. Corporate Communications, Smucker Foods of Canada (owners of Bicks.) Correspondence with CooksInfo.com 24 November 2009.