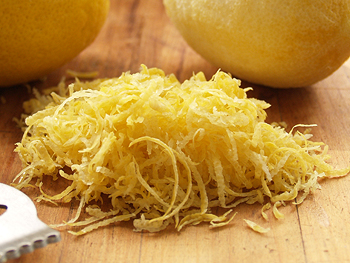 The zest is worth the trouble to get to use in cooking, as it has richly flavoured and scented oils that are great in food — not to mention drinks.

Zest is also used as a verb, meaning to get the zest off in small pieces. You almost never use zest in large chunks. Either you chop it into very small bits for baking or sauces, or slice it into thin strips. If a recipe calls for peel, it generally means you can leave a bit more of the white pith on, and make the pieces somewhat bigger and thicker.

There are several different ways of getting the zest.

The first is that you can rub the fruit up and down the side of a grater. Just be careful to not dig into the white bit. If you are, rotate the fruit and start on a new patch. If the zest is going into baking, then you can use the small hole side of the grater. If you’re trying to make zest strips for decoration or for drinks, it’s a bit tougher with a grater — you can try the slicing side, but you may just get quite short strips.

In the second method you use what is called a “zester.” A zester is a hand-held metal implement designed to get just the thin layer of zest off. With practice, you can also use a very thin-bladed paring knife. Don’t use vegetable peelers, as their blades are too thick and you will end up with wedges of white pith instead of waif-like strands of peel.

Lemons and oranges with the thickest skins, usually indicated by a bumpy or rough surface, will give you the most zest. Always zest a citrus fruit before cutting or juicing it.

It’s a good idea to scrub the zest of the skin with a brush, or if you don’t have a brush, give it vigorous rubs under running water to ensure that all contamination is removed. The fruit in North America may have a thin waxy coating; washing it will get rid of that, too.

There are two ways to store lemon zest, drying and freezing. It will be good for cooking after either method, but not for using fresh (e.g. garnishing a cake or plopping in a fancy drink.)

To dry it, preheat oven to 150 F (65 C). Spread your lemon zest on waxed paper on a cookie sheet; place in oven for 1 hour, with the door slightly open. Turn the tray occasionally to stop one area from drying more than another. Remove from oven, let cool, and place in sealed container. To use, rehydrate in lukewarm water for about 20 minutes.

To freeze it, just put into a freezer bag and freeze for up to a year.

Fancier names for the pith are “white albedo” or “mesocarp”.