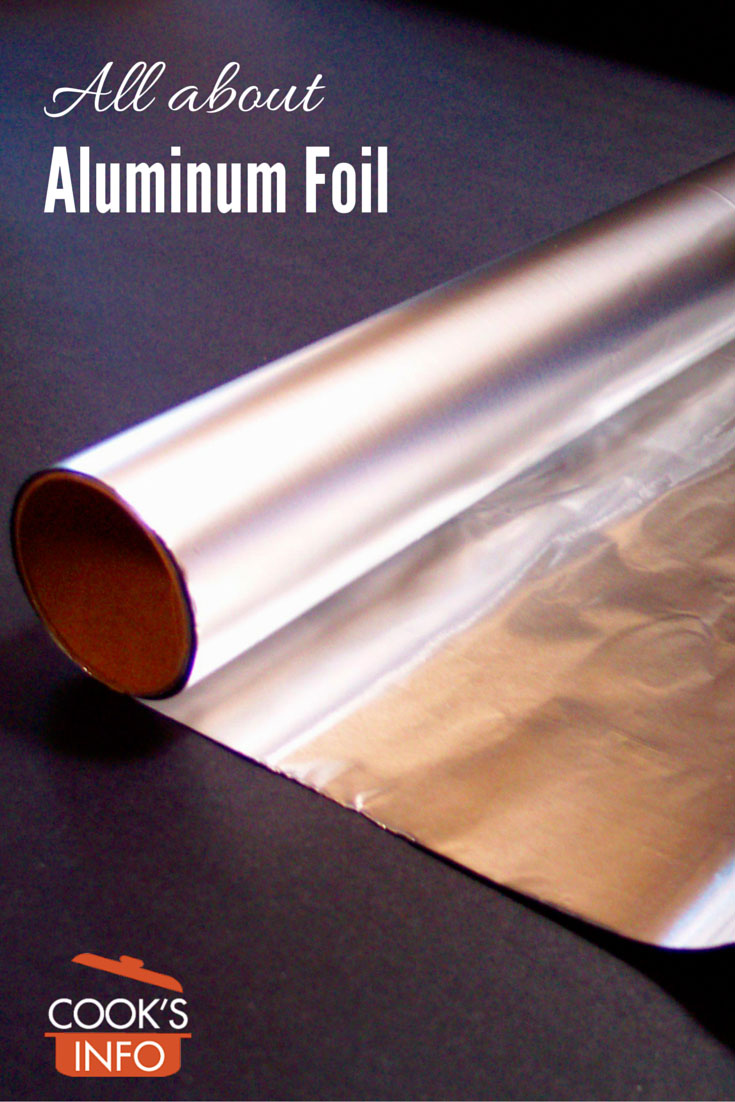 Are you in a part of the world where they spell it aluminum foil or aluminium foil? Chances are, though, that both might also get pronounced “tin foil” at times.

Tin foil was actually different, as it was made actually out of tin. Pound-for-pound, aluminum covers almost three times more area than tin, so it is easy cost-wise to see why it became popular among producers as a replacement for tin.

Aluminum foil was first produced around 1910 in Switzerland, and used to line tea boxes and to wrap chocolate bars in. It took several decades for it to replace tin foil entirely in household and other commercial uses — during WWII, when people saved tin foil for the war drives, they were still actually saving tin, not aluminum, foil.

Aluminum foil has somewhat fallen out of fashion in home kitchens these days, having been supplanted by plastic wrap. Though much of this trend is no doubt owing to plastic wrap being microwave-friendly, part of it has also been environmental concerns about the production of tin foil. But while used plastic wrap remains garbage, pure and simple, aluminum foil is now being included in more and more recycling schemes. And though it takes 15 kWh of electrical energy to produce a kilo of aluminum the first time, it only takes 5% of that amount of energy to recycle the metal back to “as new” condition. This gives aluminum foil producers a real economic interest in getting recycled aluminum foil back, because it helps them keep their costs down.

North Americans complain that the tin foil available at most places in France is too thin and consequently rips too easily.

Aluminum foil also continues to offer many benefits in home kitchen use:

One of the great myths about aluminum foil is that when baking with it, you always put the shiny surface of the aluminum foil on the inside and the dull surface on the outside. The dull side absorbed the heat into what you were cooking, and the shiny side reflected it back inside, keeping the heat in. In fact, however, aluminum foil has a dull side and a shiny side simply because of the way it’s processed. Although the two sides of aluminum foil may look different, there is no appreciable difference in heat reflection or transmission on either side.

Tin foil will sometimes react with highly salted or highly acidic foods, such as tomato sauces to produce aluminum salt, which is harmless, but still unsettling when your dinner guests are watching. The reaction can also create pinholes in the foil.

Some studies maintain that the amount of aluminum that leaches from aluminum cookware and foil into food is generally negligible, despite the press attention this received in the 1990s.

As of 2004, at any rate, the opinion of mainstream medical thinking appears to be that aluminum poses no danger, and that earlier studies were flawed.

If you still wanted to avoid aluminium in your home nonetheless, then you will probably want to consider not eating out as well, as most restaurant, catered and take-away food is cooked in aluminum pots.

Aluminum Foil was developed initially to protect cigarettes and chocolate from humidity.

Richard Reynolds started his own Aluminum Foil business to supply this demand in Louisville, Kentucky in 1919. He called his company the “US Foil Company.”

By 1949, his company was convinced of the home market for this Aluminum Foil as well and so by the next year, 1950, the Reynolds Company started selling it in rolls to home consumers.