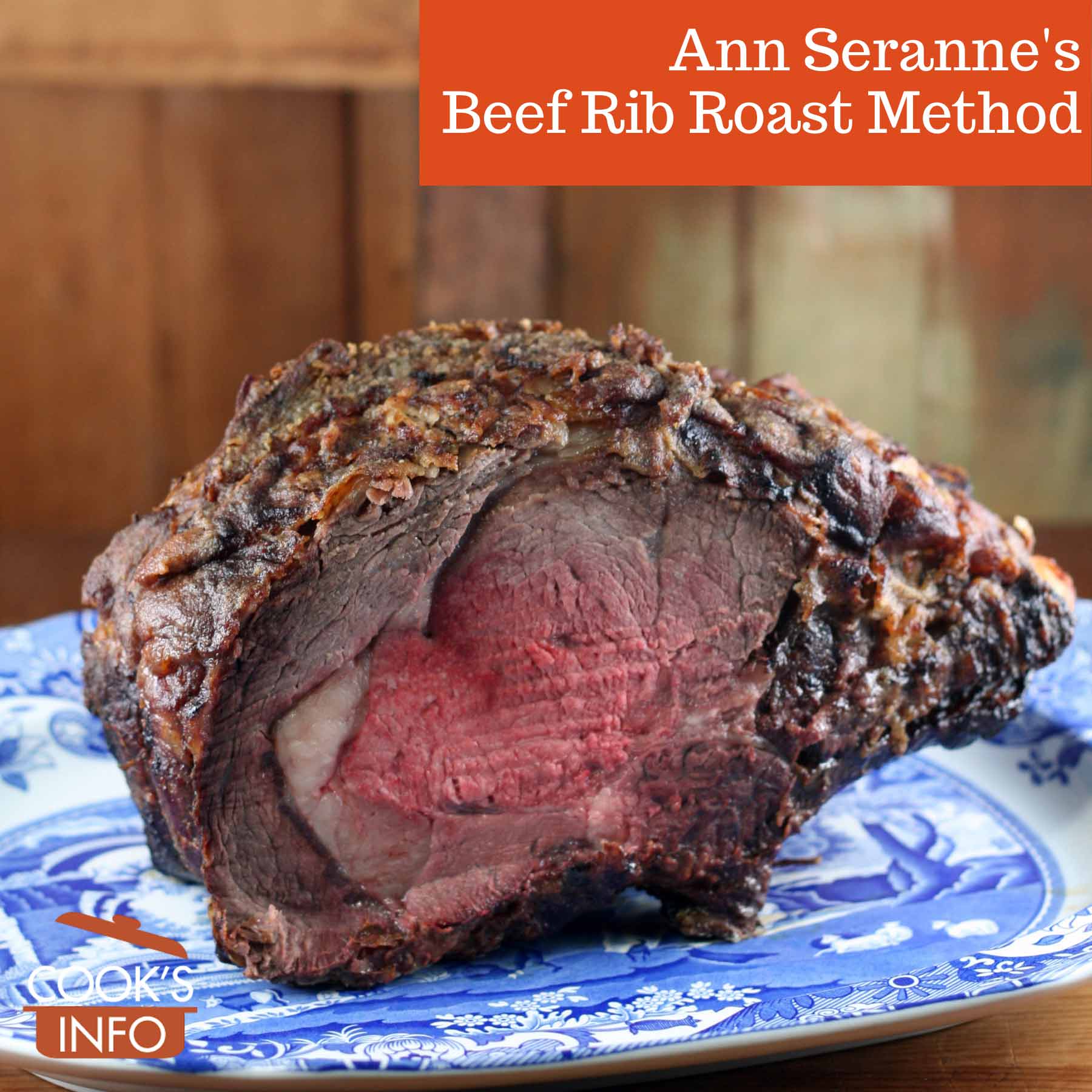 The Ann Seranne method of cooking a beef rib roast develops a coarse, salty, crunchy, toothsome crust on the roast. It uses very high-heat for a very brief period of time. It is very unique and though not widely known by everyday cooks, has achieved cult status amongst its devotees.

Most slices will be that medium-rare pink that people desire of a rib roast; slices from the very centre may be rare.

The method was documented by the 1950s and 60s food writer and a former editor of Gourmet magazine, Ann Seranne. She herself did not think the idea was original, but praised it for being practical: “Perhaps it’s not the most original idea on earth, but think of the time you save…. long enough for a game of golf or an appointment at the hair-dresser.” [1]In: Clairborne, Craig. Ann Seranne’s Recipe for a Perfect Roast: Put It in the Oven and Relax. New York: The New York Times. 28 July 1966. Page 36, Col. 1. But even though she herself did not claim to have invented it, it has become associated with her.

Depending on the weight of your roast, start 5 to 7 hours before you plan to be serving it at the table. Bear in mind, all but 15 minutes of that will be idle time for you.

For medium well-done rather than rare, add 10 minutes to the cooking time above.

When the time has elapsed, turn off the heat.

CooksInfo note: Some people feel that ovens nowadays are not as well-insulated as they were in the 1960s. They advise the use of an instant read meat thermometer, even though this of course involves opening the oven door: when the meat reaches 130 F (54 C), they say, that is when you turn off the heat and start letting the beef rest in the oven. Ann herself, though, dismissed the idea of meat thermometers: “I’ve never trusted meat thermometers”, she said one day this week, and after a moment’s reflection asked, “Who does?” [2]Ibid. (Note that her views on meat thermometer usage do not reflect that of modern food safety practice.)

However, if practicality dictates that you need to use the oven for something else, you can remove the roast from the oven and cover it. Ideally with a large, heavy lid or pot that will fit over it, or if all else fails, tin foil, and over top that a towel or something to help insulate and keep the heat in.

After two hours is up, you can remove from the oven and serve. Actually, the internal temperature will stay warm enough for serving for several hours after removing from oven.

Some people have subsequently advised that it is fine, and added that you may wish to loosely cover the roast before putting in the oven with aluminum foil to prevent splatters. 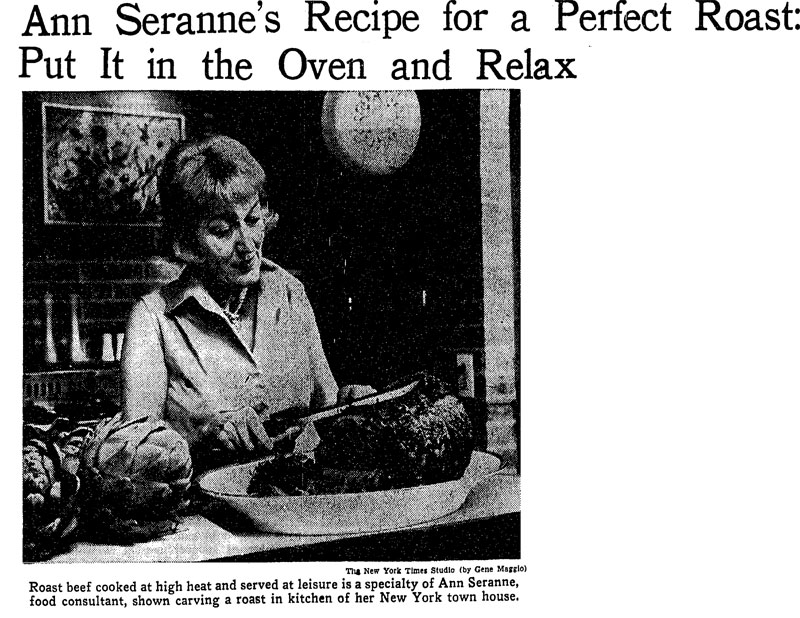 Count on about 2 servings per rib.

Ann Seranne (1913 – 1988) was a food professional. A Canadian, she moved to the States in 1936 at the age of 23. She was an executive editor of Gourmet Magazine, and an author of many cookbooks, including, ironically, one of the first big vegetarian cookbooks, “Good Food Without Meat.”

Craig Claiborne admired her, and republished her method of roasting beef in an article of his for the New York Times. He wrote that “she has developed a technique that is so basic, so easily applied and so eminently satisfactory in its results, the astonishing thing is it is not universally known.”

In 2000, Fran McCollough and Suzanne Hamlin republished it via Claiborne in their book, “The Best American Recipes 2000”, calling it a “cult classic.” In 2011, Amanda Hesser again brought it to the attention of the public in the New York Times.

This web site generates income from affiliated links and ads at no cost to you to fund continued research · Information on this site is Copyright © 2022· Feel free to cite correctly, but copying whole pages for your website is content theft and will be DCMA'd.
Tagged With: Beef Roasts