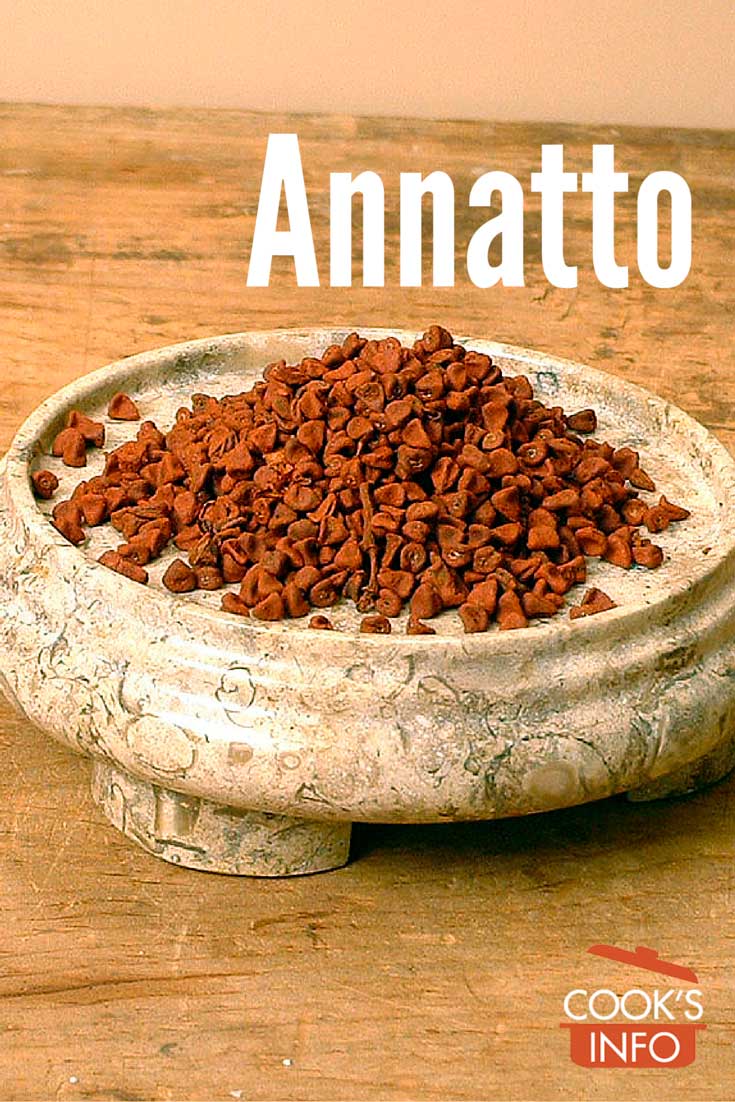 Annatto is a seed used as a food colouring. In many people’s view, it has little or no discernible taste.

Annatto comes from a bush, conveniently also called “Annatto”, which is native to South America.

The bush flowers with blossoms that may be either bright white, or pink. 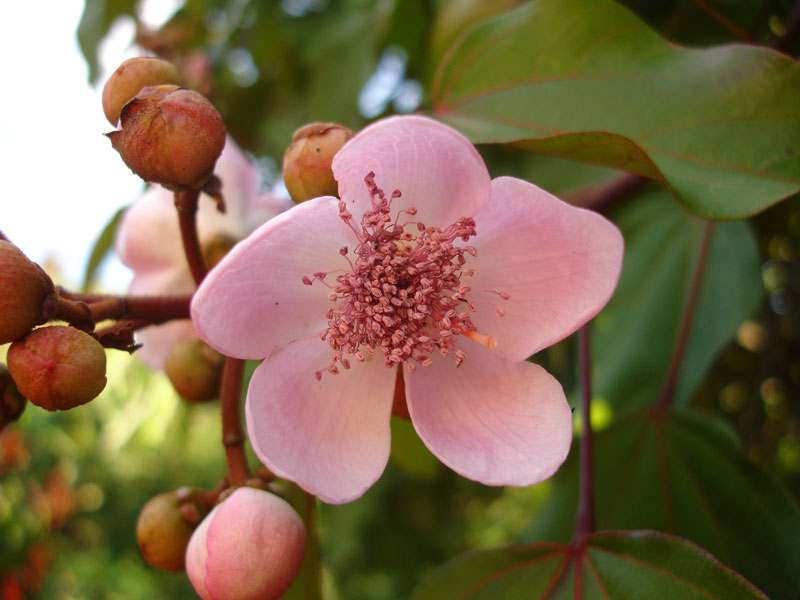 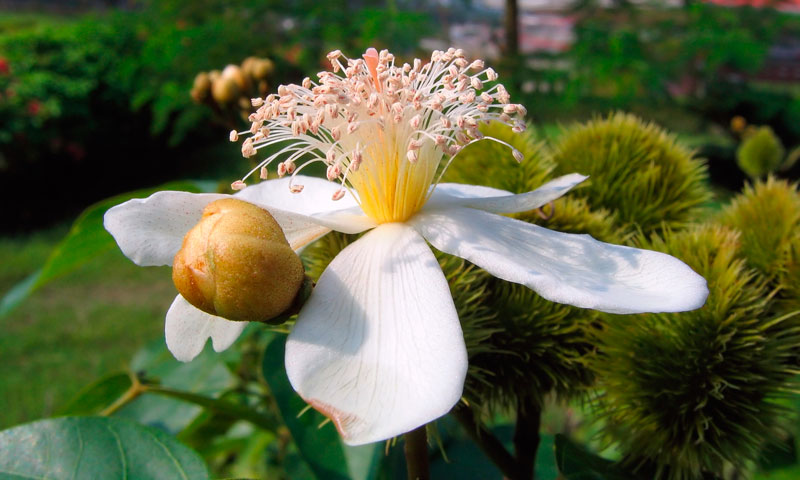 After the flowers are pollinated, the bush then produces hairy pods that turn blackish-brown when ripe.

The seeds are harvested from the pods, and dried to become “annatto” — small, hard, dark red seeds with a faint, flowery odour. 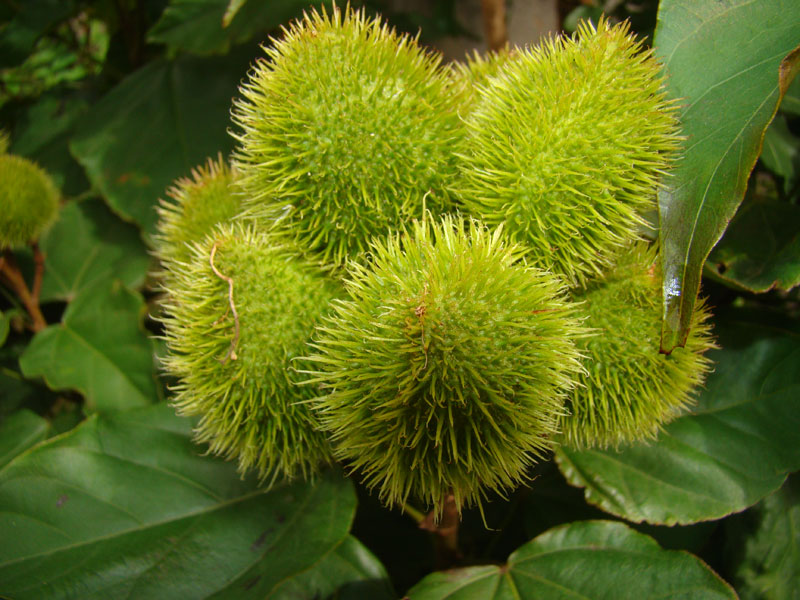 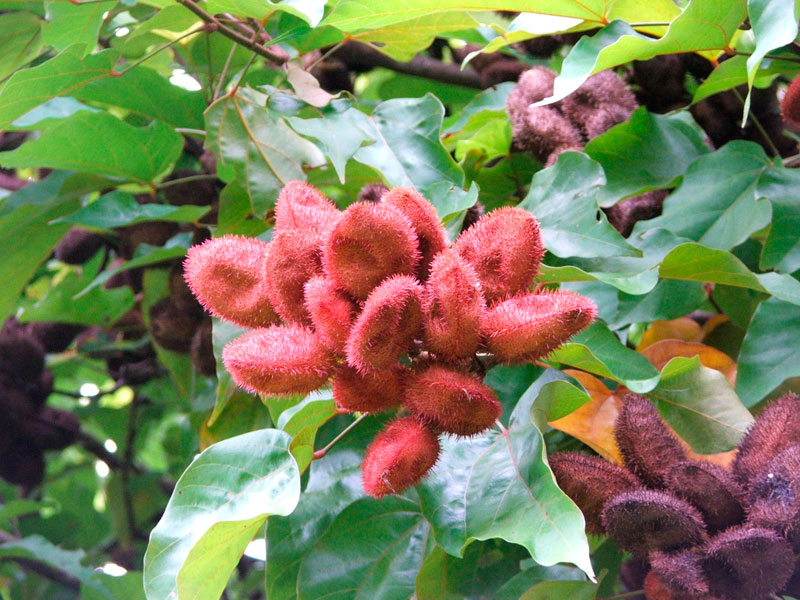 Annatto is used a good deal as a natural food colouring in Filipino and Latin American cooking . The most popular way of buying annatto is as “achiote” paste (achiote being another word for annatto), which is easy to work with.

In Brazil and the Philippines you can also buy “atsuete” (yet another synonym for annatto) food colouring in liquid or powder form. 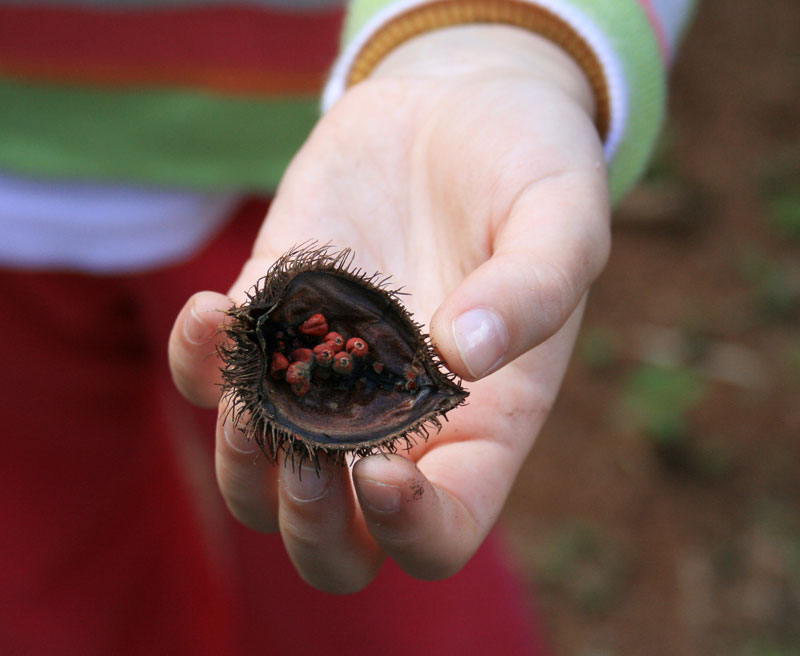 The colour that annatto gives you in your cooking will depend on how old your seed is, how much of it you use, and what other colours in the food the annatto is interacting with: you’ll see anything from yellow, golden yellow, red yellow, orange, or browny yellow.

In European, British and North American food, annatto is used to colour butter and margarine, and cheeses such as Red Cheshire, Red Leicester and orange cheddars and Colby. It is also used in some lipsticks.

Some people say that annatto has a taste: their descriptions range from pleasing to earthy to slightly bitter. An equal number of people say they honestly can’t pick out any discernible taste at all. We’re with the “can’t taste a thing” crowd; perhaps the other crowd may be using a paste to which other flavouring has been added. As for just starting from scratch with the seeds, the taste or non-taste may be related to how long you’ve had the seeds in the cupboard: some say that the red seeds are flavourful, but that as they get old, as indicated by their turning brown, they become flavourless.

Beyond that, it is difficult to see it being used as a food colouring in dairy products if it had any taste at all, though if it did, it wouldn’t be such a bad thing for some of the bland North American cheddars it is used in. Even the UN’s FAO (Food and Agriculture Organization) treats annatto as a food colouring, not a flavour additive.

Red Achiote rice is made by first soaking the seeds in water for a time, usually overnight, then straining out and discarding the seeds and cooking rice in the coloured water. The rice doesn’t actually come out red; it’s more of an orange colour.

Being very hard, the seeds can very difficult to work with if you go about it the wrong way. You can’t just sprinkle them as is into a dish, as they don’t soften much with cooking and it will be like small gravel somehow fell into your food. You need to either crush them, or use a liquid to draw their colour out. If you crush them yourself, don’t use a mortar and pestle that you are fond of, as they will get stained a dark red. If you use a coffee or spice mill, make sure all the parts that it will come into contact with are washable. Most people who need them in crushed form, say to rub into the surface of a meat for colouring, will buy the already ground “pasta de axchiote”.

The other way to use annatto seeds is to infuse them in a hot liquid such as oil or water for a time, let the colouring seep out, and then strain the out and discard the seeds. To infuse in water, add 1 teaspoon of annatto seed to ¼ cup (2 oz / 60 ml) of boiling water, let steep for half an hour, strain out and discard the seeds, then use the water in your cooking. If you’re adding the water to a recipe which didn’t really call for annatto water, just reduce any other liquid in that recipe by ¼ cup.

If you use a lot of annatto seeds trying to get a very deep colour, you may get an unpleasant, bitter taste, because the quantity of seed required will also give you the bitterness.

Annatto is native to South America.

Acapulco in Mexico and Manila in the Philippines were important Spanish ports. There was a great deal of trade between them, starting in 1572, and reaching its heyday between the 17th to 19th centuries. This trade route allowed the two Spanish colonies to trade food ideas and ingredients. (Adobo sauce is another food idea shared between the two countries.) From the Philippines, annatto spread into South-East Asia and up into China.

South American warriors would use annatto as part of their warpaint make-up kits. It is believed that the Aztecs coloured their drinking chocolate with annatto, as the Europeans picked up the same habit and did it until the late 1660s.

The Cacao, and the other Ingredients must be beaten in a Morter of Stone, or ground upon a broad stone, which the Indians call Metate, and is onely made for that use: But the first thing that is to be done, is to dry the Ingredients, all except the Achiote, with care that they may be beaten to powder, keeping them still in stirring, that they be not burnt, or become black; and if they be over-dried, they will be bitter, and lose their vertue. From “Chocolate: or, An Indian Drinke.” London, 1652, by Capt. John Wadsworth. Translation of a book by Melchor de Lara, “Physitian General for the Kingdome of Spaine”, 1631.

In Brazil, the bush is known as “Urucum.”

This web site generates income from affiliated links and ads at no cost to you to fund continued research · Information on this site is Copyright © 2022· Feel free to cite correctly, but copying whole pages for your website is content theft and will be DCMA'd.
Tagged With: Colourings, Latin American Food