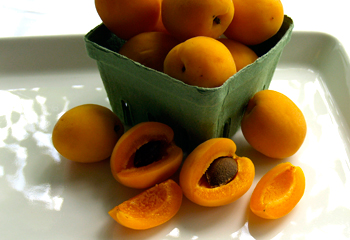 Apricots are a member of the rose family, along with peaches, plums, cherries, and almonds.

Apricot trees do best in temperate climates. The average Apricot tree grows 12-15 feet tall (3.5 to 4.5 metres.) From first planting, it takes a tree about 4 years to become a good producer, and from that point it will grow fruit for 20 to 25 years. The fruit is almost perfectly round, smaller in size than a peach and about the size of a plum. The golden skin will be slightly fuzzy. The fruit ripens end of July to mid-August (in California, mid-May to July.) As it ripens, the inner layers become woody and eventually form the stone. The stone is oval and smooth, and easily comes out from the fruit, unlike some of the clingstone varieties of peaches. The stone’s centre goes on to form into an almond-shaped kernel, which is the actual seed of the tree.

Apricots do not travel well — less than one-quarter of Apricots are even shipped fresh to our grocery stores. Apricots are picked when they have good colour and come off the tree without tearing, but before they are fully ripened. Producers have to do this because Apricots are very delicate fruit and bruise very easily. Only when they are firm can they be shipped and arrive looking like anything you would want to buy. Unfortunately, Apricots are one of those fruits that once picked have a problem with ripening afterward. It’s true that you can ripen them a bit further at home to improve the colour, juiciness and texture, but the flavour and sweetness are fixed once the fruit leaves the tree.

Ironically, because Apricots destined for commercial processing can be left on the trees longer, canned Apricots end up having a much fuller flavour (the nutrient loss during processing is extremely slight.) This is also why store-bought Apricot Preserves will taste more Apricot-ty than your fresh ones in the bowl. Three-quarters of all Apricots grown end up at stores in a processed format.

When you are buying fresh Apricots, choose relatively firm ones and avoid any with large bruises (the bruised parts turn mooshy and lose any flavour that they did have.) Whatever the colour of the skin, which can range from burnt orange to pale yellow depending on the variety, the colour should be relatively uniform with no tinges of green. When you get them home, ripen them up for a day or two until they are soft to the touch.

You shouldn’t need to peel an Apricot, unless you run into one that has decided to be very fuzzy. Just wash, cut through them all the way around to the stone, then twist apart and pull the stone out. When cut and exposed to air, Apricots will darken quickly. So, either don’t dawdle once you have opened them up, or dip them in lemon or pineapple juice to prevent this. Sugar will also do the trick, if what you are making calls for it.

An excellent source of beta-carotene, which turns to Vitamin A when processed by our bodies;

Apricots will usually be very firm when you get them home from the store, and need to be ripened further to make them softer (the flavour and sweetness will not improve). Put in a paper bag and let sit at room temperature for a few days until they are ready. Once they are soft, store them in the refrigerator for up to two days; after two days they will start to lose their flavour. While they are in the fridge, keep them in a plastic bag as refrigeration seems to really suck the moisture out of them.

To freeze fresh Apricots, blanch in boiling water for between 20 seconds and 1 minute. Plunge into cold water. Drain. Whether you peel the skins or not is up to you. If you hadn’t blanched them, the skins on some varieties of Apricots would get quite tough during freezing, and it’s not as though grocery stores are ever any good at posting what variety it is that they are selling. But by blanching them, you are covered, so you shouldn’t have that problem. If your preference is still to peel them, you should do so now. Then, slice in half, remove and discard the pit. Dip in lemon juice or pineapple juice (or any kind of ascorbic acid or citrus juice — the purpose is to stop the fruit from blackening). Pack, and freeze. You can also pack them in sugar or a sugar syrup before freezing, if desired. The standard recommendation is that you can keep them in the freezer for up to a year if they are packed in something sugary, and three months if not. 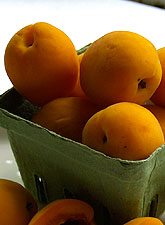 Apricots originally grew in temperate parts of Asia such as northern China and the Himalayas. There is evidence that they were deliberately farmed there as early as 2000 BC. They worked their way westwards from Asia to the Arabic world, and thence into the Mediterranean. A story has arisen that it was Alexander the Great who brought them all the way from China to Greece in the 4th century BC, which seems rather unlikely considering that Alexander didn’t live long enough to go to China.

The Romans didn’t have apricots at first, but they did by 200 A.D. The collection of recipes attributed to the Roman gourmet, Apicius, recorded recipes for them.

Apricots seem to have disappeared from Europe after the Roman Empire, until the Arabs re-introduced them when they conquered and occupied Spain. During the time of Henry 8th, they made the leap from Italy to England. Spanish monks brought Apricot trees to California in the late 1700s, and by 1792 California had its first recorded crop south of San Francisco. Today, the United States produces ninety percent of the world’s Apricot crop.

How you pronounce Apricot generally depends on where you are. How have you been pronouncing it in your head as you read through this?

The English word “Apricot” (and the French word “abricot”) comes from the Latin word “praecocia” which meant early ripening. Praecocia gave us our English word “precocious”. The English Elizabethan writer Geffrey Whitney made a play on words between Latin and English when he gave one of his poems a Latin title, “Praecocia non diuturna”. Though the poem is ostensibly about fruit, and begins “The fruicte that soonest ripes, doth soonest fade awaie”, he is clearly talking about precocious people fading as fast as they bloom.

Really clever readers will already have made the leap to the name of the month of April, and to its Latin forebear “Aprilis” meaning to open, as in flowers opening in the spring. But don’t get too clever: remember, “praecocia non diuturna.”

“Irish Apricots” was a slang term for potatoes.