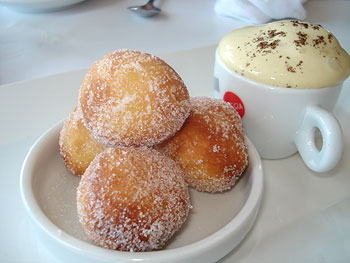 Baignettes is a French word for small doughnuts. Large doughnuts are more likely to be referred to as “beignets.”

Typically, Baignettes are often presented as small, doughnut balls with no hole in them, dusted after cooking with very fine granulated sugar (aka castor sugar.) They are usually served two or three at a time.

The doughnuts are made from wheat flour, egg, milk, butter, sugar and yeast. The thick dough, about the consistency of bread dough, is let rise, then formed into balls and fried in oil. After frying, the doughnuts are dusted with the sugar.