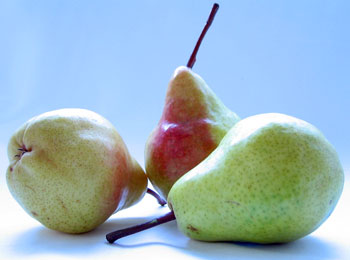 Contents hide
Bartlett pears (aka Williams pears) have the shape that everyone thinks of when they think “pear” — even if they don’t know what a Bartlett is.

Bartlett pear trees are self-pollinating (which means you don’t need two trees.) In fact, Bartlett is often used to cross-pollinate many other types of pear trees, even Asian pears. Like all pears, though, Bartlett pears can’t be left to ripen on the trees or they will go mealy. When harvested, they are graded and sorted, then either sent to be processed or shipped to the fresh fruit market. When Bartletts are shipped fresh, they are cooled to slow the ripening process. The consumer re-starts the ripening process by letting the pears stand at room temperature.

Bartletts are excellent for preserving, and in fact are one of the top choices of North America’s commercial canning market. Because of the speed at which they reach the processing plants, the canned pears will often have more of a pear flavour than the fresh ones do.

Bartlett pears come in yellow or red skinned varieties; both have virtually the same taste and the same soft, buttery, juicy, sweet texture.

500 g / 1 pound Bartlett pears, unpeeled and whole = around 3 Bartletts depending on size (very large ones, 2)

The Bartlett pear, also know as the Williams pear, was actually originally called the “Stairs Pear.” The variety was discovered in England in 1765 by a school teacher named Stair. A horticulturist named Williams championed the variety and introduced it to the rest of the country, and for some reason “Bon Chrétien” (meaning “good Christian”) was tacked onto this name, making the pear “Williams Bon Chrétien”.

At the very end of the 1700s, the Williams trees were imported into the US and planted on a farm in Roxbury, Massachusetts. The farm was eventually purchased by a man named Enoch Bartlett who, not knowing that the pears already had a name, promoted the variety under his own name. Only in 1828, when a fresh batch of Williams trees arrived from England, was it realized that the newly-named pears already had a name, but by then “Bartlett” had stuck in North America.

This web site generates income from affiliated links and ads at no cost to you to fund continued research · Information on this site is Copyright © 2022· Feel free to cite correctly, but copying whole pages for your website is content theft and will be DCMA'd.
Tagged With: American Food, Bartlett Pears, British Food