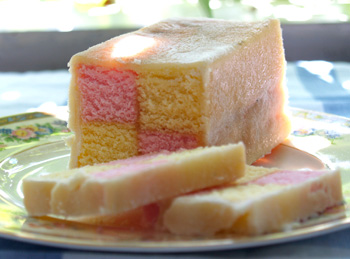 When cut cross-wise, as it is meant to be, the slices show themselves to be composed of 4 squares of cake, checkered yellow and pink. Both colours of cake taste the same.

The cake is a combination of sweet tastes: almond, cake, and apricot jam.

To make it, one cake batter is made. Half of the batter is taken out, and dyed pink.

Each batter is then baked. Some advise to cook both halves in the same cake tin, in order to get an even height between the two batters, but many people advise to just use two separate pans to avoid the issue of the two batters blending into each other (which you don’t want.)

Each of the two cakes is then cut in half to make two long sticks, giving you four square lengths altogether to work with. One of the two cakes may need to be trimmed to make sure it is the same height as the other one so that when assembled, the squares will be aligned properly. [1]

The four sticks of cake are then assembled in a brick shape, using heated apricot jam to bind the inner edges together. When assembled, you also brush the top of the cake and the exterior sides with the melted jam to help the marzipan stick better. You then roll out marzipan in a sheet, and use it to cover the cake with. Some advise that it is best if left to stand a day or two before slicing, or at least several hours.

Commercial versions became available in the early 1900s. Well-known commercial brands are Lyons, Mr Kipling, plus supermarket brands. Packaged ones may have drops of almond oil coming out of the marzipan.

In April 2008, it was feared that a call for an EU-wide ban on certain food colourings would spell the end of the cake. [2]

There is a recent tradition of serving Battenberg Cake on St George’s Day in England.

[1] You can buy special Battenberg pans: they are a rectangular cake pan, 8 inches x 6 inches (20 x 15 cm), with 3 lengthwise dividers that you put in to make 4 long sections.

John Ayto in “Brewer’s Dictionary of Modern Phrase & Fable”, Sterling Publishing, 2006 (page 59) says that Battenberg Cake was “first recorded in 1903”, but Ayto does not say first recorded where.

One theory explaining the name is that the 4 squares in each slice represent the four German Battenberg princes (Louis, Alexander, Henry and Francis Joseph) at the time of the marriage on 30 April 1884 of Queen Victoria’s granddaughter Princess Victoria to Prince Louis of Battenberg (1854 to 1921), who would become the grandfather of Prince Philip, Duke of Edinburgh. In 1917 Louis changed his surname from Battenberg to Mountbatten.