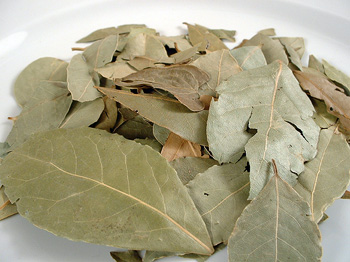 Bay trees can be kept trimmed into hedges or bushes, or in a warm Mediterranean climate can grow quite tall, up to 60 feet (18 metres.) The tree is an evergreen — its thick, smooth, shiny dark-green leaves stay on the tree all year round.

If you live in an area where you can grow Bay (aka Laurel) trees, you can use the leaves from the bush. Just make sure it’s a Laurel bush, and not a cherry laurel (see Nutrition below.) Still, you shouldn’t necessarily envy those that have a bush growing by their back garden gate: the fresh ones actually impart a slightly bitter aftertaste that the dried ones won’t.

Since dried is what most of us can get, it all works out fine. Bay Leaves stand up well to slow cooking — unlike most other herbs, which should be added at the very last. It is best to add the leaves whole, as that makes it easier to remove them before serving (which you definitely want to do — there is nothing worse that hearing people moan about leaves in their dinner.)

Laurel bushes have poor resistance to freezing and so don’t like northern climates.

When making custard or crème brûlée, a Bay Leaf used to infuse the warm milk can give a delicious flavour.

There’s nothing like boiling or steaming something of the cabbage family — cabbage, kale, broccoli, cauliflower, Brussels sprouts, etc — to make your house pong with the smell, oftentimes just when you want your place to smell its best for guests! Put a Bay Leaf in the water. For some reason, it works — and the imparted flavour won’t do any harm, either!

Bay Leaves from laurel bushes shouldn’t be confused with leaves from the “cherry laurel” bush. The cherry laurel isn’t actually related to the laurel bush at all, it just has laurel as part of its name because its leaves look somewhat like Bay Leaves. However, the leaves, which are shinier and larger, have a fair bit of toxicity in them, and though apparently it is fine to use them in very small doses, they are best avoided altogether (they contain prussic acid.)

Dried leaves can be stored for up to a year. But if the leaves start to turn brown, discard them. Much of their flavour will have gone and they will just taste like – well, dead leaves.

The Bay tree is probably native to the area we know now as Turkey. Persians introduced the trees to the Greeks and Romans, who spread them around the Mediterranean.

The Greek word for the tree is “dhafni” or “Daphne”. Daphne was a nymph who was trying to escape from Apollo’s attentions. Gaea transformed her into a laurel tree; Apollo declared the tree sacred. The Greek priestesses at Delphi used Bay Leaves in their ceremonies.

Bay Leaves have been used in cooking in Europe for centuries. The Romans used them a lot in cooking.

‘Tis thought the king is dead; we will not stay.

The bay-trees in our country are all wither’d,
And meteors fright the fixed stars of heaven;
The pale-faced moon looks bloody on the earth,
And lean-look’d prophets whisper fearful change…
— Captain. Richard II, II, 4. Shakespeare.