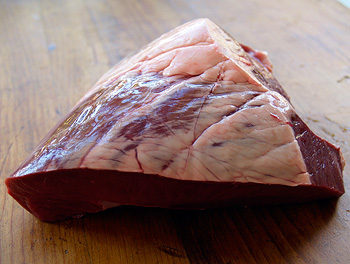 Beef Heart is a lean meat.

To do this, butchers will slice the heart open and lay it flat, to get at all the ligaments inside. They will also trim away a good deal of the exterior membrane.

It is sold to you in this flattened format.

Beef Heart is a tough meat — it’s a hard-working muscle, after all — so it needs low and slow cooking. Even after that, though, it will still be a bit chewy. It has a pronounced taste, which fans call “robust.”

Trim off any membrane left on it.

Pot roast it, either in the oven, in a crock pot, or in a pressure cooker. In an oven, allow 45 to 50 minutes per pound (450g.) You can use water, broth or red wine as the pot roasting liquid.

You can also chop it into cubes, and use it in stews.

Some people like to stuff it by wrapping it around a stuffing and tying it.

Some fans say that if you slice it very thinly, you can sauté it, or bread and fry it.

“TO ROAST BEEF HEART: Wash it well, and clean all the blood carefully from the pipes; parboil it ten or fifteen minutes in boiling water; drip the water from it; put in a stuffing which has been made of bread crumbs, minced suet or butter, sweet marjoram, lemon thyme, and parsley, seasoned with salt, pepper, and nutmeg. Put it down to roast while hot, baste it well with butter, froth it up, and serve it with melted butter and vinegar; or with gravy in the dish, and currant jelly in a sauce-tureen. To hash it, follow the directions given for hare.”

— Catherine Emily Callbeck Dalgairns. The Practice of Cookery: Adapted to the Business of Every Day Life. London: Richard Griffin and Company. 1840.

This web site generates income from affiliated links and ads at no cost to you to fund continued research · Information on this site is Copyright © 2022· Feel free to cite correctly, but copying whole pages for your website is content theft and will be DCMA'd.
Tagged With: Beef