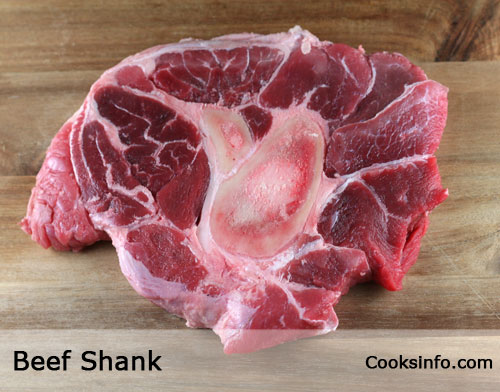 The Shank area is at the front of the cow, under the Chuck. It takes in the front legs and the breast of the cow.

Though it’s a pretty tough meat area, with its cheaper price tag reflecting that, it not only tenderizes well when cooked slowly, but the tissue in the cuts, which is full of collagen, turns into a superbly flavoured gelatin which makes this meat good for stews and soups.

Sometimes sold labelled as “soup meat”, or in Australia, as “gravy beef.”

Chop the meat up to use, but add the bone to the dish for the added flavour and then remove before serving.

The marrow can be just cooked in the stew, or if you have enough slices giving you enough marrow to bother with, you can cook it separately.

A whole shin can also be roasted very slowly in the oven.

This area is called the Foreshank in the UK.