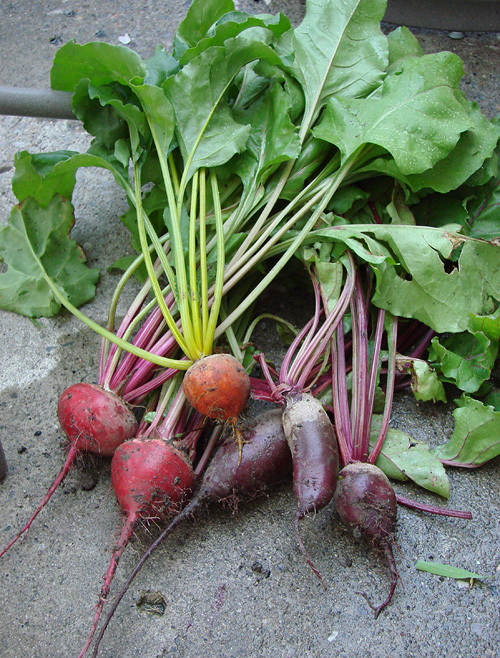 Beets are a root vegetable whose tubers are round with a high sugar content. Typically, one thought of beets as red, inside and out, and round.

Now there are varieties that are tapered, white, yellow and even striped, such as the new chiogga beet. Sugar beets, which are grown for their high sugar content (8%) to be made into sugar, are white and not really round at all: they are more tapered, like a parsnip.

The smaller the root of the beet, the more tender and sweet it will be.

The leaves of beets are also eaten (the young, tender ones have better flavour.) In fact, where you are will in part determine which part of the beet you prize more. In the Southern US, the greens are the more esteemed part; in the northern US and up into Canada, “beet” means the root.

Sometimes beets are sold with the greens on, sometimes the leaves are taken off and sold separately. When buying the beet tops for use, they should look like greens you want to eat: fresh and dark green with no wilting.

In the UK, the word “Beetroot” is used to distinguish the root part of the vegetable from the green, leafy tops. This is a useful distinction.

You lose about 25% in weight going from uncooked beets with their skins on to cooked, peeled beets.

The roots of beets are generally boiled, but they are equally good steamed or microwaved, and some say their earthy flavour is even better when they are roasted. However you cook them, it is generally considered better to cook them with the skin on, to preserve flavour and colour — they peel quite easily when cooled. Beets that are peeled before boiling will have their colour fade. Scrub lightly first to remove any sand and dirt. Very small beets will need about 30 minutes of boiling; larger beets will need about 45 minutes.

Roasting beets brings out the sweetness in them, and may be a way of tempting those people who have been turned off by boiled beets. (Allow 1 ½ hours for large Beets; about an hour for smaller ones.)

When cooking Beet Greens, cook as you would spinach.

Dill weed complements beets nicely, as does citrus (the sourness helps to highlight the sweetness.)

In chocolate cake recipes, grated raw beet root or cooked and puréed beet root can enhance the brown colour, reduce the amount of sugar or other sweetener required, make the cake moister, and boost the nutritional level.

For the leaves, substitute spinach or chard. Canned beets can be used without worry as a substitute for fresh ones — though check carefully the sodium content of the canned ones. 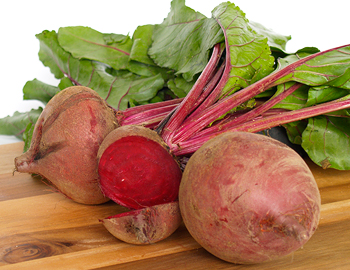 In 2012, a team of researchers at the University of Reading in England published some study findings that they felt could indicate that beet juice might help lower blood pressure. They found that consuming 100g of beet juice could lower blood pressure for up to 13 hours, owing to the nitrate content in beets. When you consume nitrates, the body converts them to nitric oxide, when increases blood flow. The effect was noted whether the beets were white or red, and even if the 100g was incorporated as an ingredient in a dish or food item. The study was published in the British Journal of Nutrition, 2012.
The sodium content of canned beets can vary widely; check carefully, bearing in mind that the recommended sodium intake for an adult is no more than 1500 mg.

Remove any leaves and leave only 2 to 5 cm (an inch or two) of the stalk on. Don’t trim the root, or wash. Store in plastic bag in refrigerator for up to 1 week.

If your beets came with their leaves and you plan to use them, wash and dry them and store in plastic bag for up to 3 days in refrigerator.

It is not certain when the roots were first used as food. Though some Romans wrote of cooking the roots of some wild beets, in Greek and Roman times the roots were hard and of little use. They used the leaves as food, and the scrawny roots for medicine. (There is however, a beetroot recipe attributed to Varro entitled “Aliter Betacios Varronis”.)

The Beet root shaped as we know it was first described in the mid 1500s by a German writer, and it apparently was a genetic mutation that had come about in Italy. It grew more in popularity in Europe than in Britain at first. Until the 1500s, the root had always been discarded; the Beet was just grown for its leaves, like Spinach or Chard is now.

The process of deriving sugar from Beets was developed at the end of the 1700s by a man named François Achard. Parmentier, the man who helped to popularize potatoes in France, was plumping for making sugar from chestnuts, but Napoleon opted to pursue and subsidize the Sugar Beet path.

How a regular glass of beetroot juice could be the key to beating high blood pressure. London: Daily Mail. 23 March 2012.

This web site generates income from affiliated links and ads at no cost to you to fund continued research · Information on this site is Copyright © 2022· Feel free to cite correctly, but copying whole pages for your website is content theft and will be DCMA'd.
Tagged With: Ancient Greece, Greens, Roman, Root Vegetables