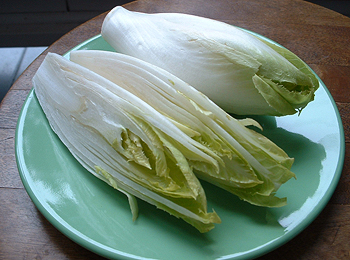 Belgian Endive is not the same as Endive.

Belgian Endive is a variety of chicory. Its narrow, cream-white leaves with yellow tips grow in a small, tight little baton shape and curve in to meet at the top. It is grown from a species of Chicory closely related to but not the same as that grown for its roots. The leaves are crisp and have a slightly bitter or tart flavour. The French call these little batons “chicons”; each baton will be from 10 to 15 cm high (4 to 6 inches.)

To grow Belgian Endive, the plants are first seeded in the spring and grown outside in the summer. The leaves will look a bit like ragged Romaine Lettuce. In the fall, the plant is harvested. The leaves above ground appear to be used for animal fodder or simply discarded; the grower is primarily after the roots. The roots are trimmed to a length anywhere between 15 to 22 cm (6 and 9 inches), then planted in shallow trays a foot or just over 30 cm (1 foot) deep. The trays are put into a dark place with high humidity between 10 to 15 C (50 and 60 F). They can’t have much light while growing or the leaves will turn green and very bitter. The root attempts to grow another plant above ground. This is the “baton”, which is the bud of the new plant trying to grow. In about 3 to 4 weeks, the batons are ready to harvest. They are snapped off or cut from the roots, trimmed, cleaned and packed for shipping. The roots will not be able to grow another plant, so they are discarded. It takes 45 kg (100 pounds) of roots to grow about 9 to 11 kg (20 to 25 pounds) of batons.

Belgian Endive Chicory can’t have much light when being grown or the leaves will turn green and very bitter. The growing process causes the leaves to become compact and blanched (white) instead.

In North America, Belgian Endive Chicory first became known in the 1970s as part of a general interest in French cooking. In North America, it is still (as of 2004) mostly imported from Europe by air.

Don’t buy any that have any tinge of green; they will taste bitter. Choose crisp, firm ones, with a compact head.

In Europe, Belgian Endive is often braised and served hot. To use in such recipes, trim off the stalk end, and discard any wilted outside leaves.

Store Belgian Endive for up to a week in the fridge, wrapped in a damp piece of paper towel, and not in any plastic wrapping. Do not store near any produce that gives off ethylene gas, such as apples or bananas.

Belgians discovered the technique for growing forced Chicory in the dark, either in dark glasshouses or with earth banked up over it.

This web site generates income from affiliated links and ads at no cost to you to fund continued research · Information on this site is Copyright © 2023· Feel free to cite correctly, but copying whole pages for your website is content theft and will be DCMA'd.
Tagged With: Blanch, Chicory, Etiolation, Leafy Vegetables