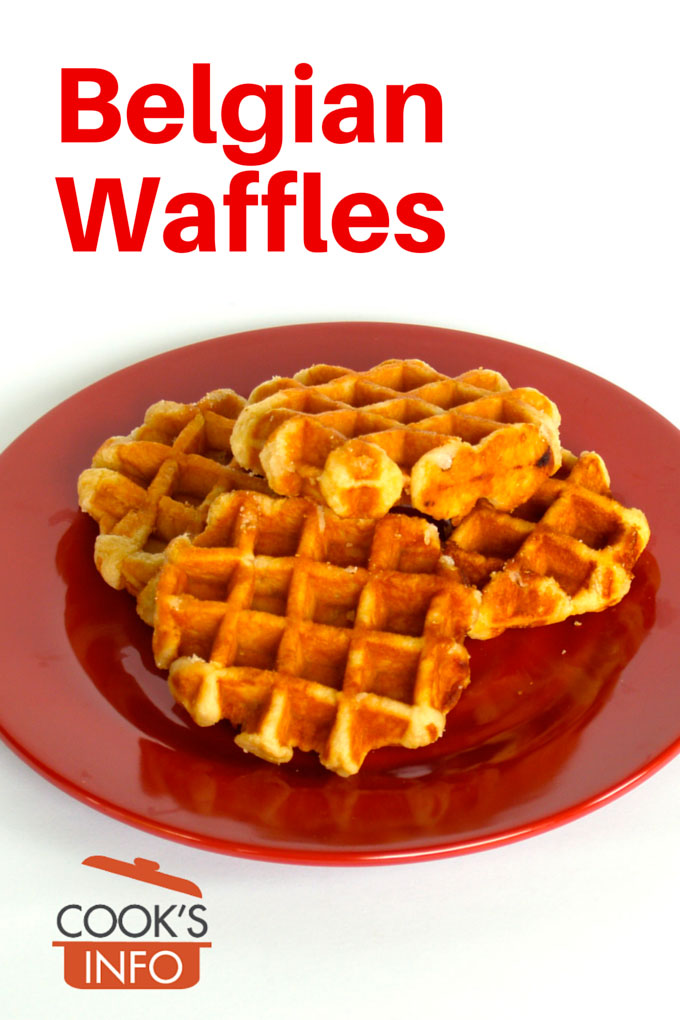 Contents hide
Belgian Waffles are an American take on styles of waffles made in Belgium. In Belgium, there’s not really any such thing as a waffle of that exact name.

Belgian Waffles are fluffier and higher than other American waffles, because they have beaten egg white in them and are leavened with yeast, which most other waffles are not, and so have a tangier taste from the fermentation.

Owing to their height, they tend to have correspondingly deeper indents in them which are better at catching syrups, melting ice cream, etc. They are often served with whipped cream and strawberries.

In Belgium, there are actually many different types of waffles. Of them, two are particularly well-known.

One is Brussels Waffles (Gaufre de Bruxelles), made from batter leavened with beaten eggs. It is served with powdered sugar (aka icing / confectioner’s sugar.)

And there are Liège Waffles (Gaufre liegeoise) made from yeast-leavened dough, almost like a brioche dough. During the dough’s final rise, polished grains of sugar (Sanding Sugar) are worked into it. As the formed waffles cook on the griddle, the sugar melts and caramelizes on the outside of the waffle. In Belgium, the Liege Waffles are very popular and even sold by street vendors to be eaten out of hand, hot or cold, wrapped in a piece of paper.

American Belgian waffles combine both the beaten-egg and yeast-leavening for their rise, and to the powdered sugar topping add the whipped cream and fruit.

In making Belgian Waffles, you need a waffle iron which can handle their height.

If you use instant yeast, the yeast batter takes about an hour to rise and be ready. You can also prepare it the night before, and store it in the fridge so it’s ready to go the next morning.

For a less fermented flavour, add some baking powder to the recipe (about 1 ½ teaspoons per 2 cups of flour), still add the yeast, but let the batter ferment for only half the time called for.

In 1958, at the World Fair in Belgium, a man named Walter Cleyman sold waffles within the World’s Fair compound area. He served them topped with whipped cream and fresh fruit, and dusted with icing sugar. Previously, Americans had only experienced waffles with syrup on them. Cleyman sold around 400,000 waffles at the fair that year. [1, 2]

Cleyman won a place to sell his waffles again at the 1962 World’s Fair in Seattle. To help him, he brought over from Belgium his wife, his two daughters, and his gas-powered waffle irons. He opened two waffle stands: one on Boulevards of the World, the other near the International Fountain. One was actually a large restaurant, on a corner, built in the style of a Belgian or Dutch building. Signage said, “Belgian Waffle House / Gauffres de Bruxelles.” [1]

The fair opened on 21 April 1962. His waffles became the hands-down food favourite at the fair: he sold over 500,000 of them topped with whipped cream and fruit. He used strawberries as the standard fruit, but whenever he ran out of them, he would use pineapple. [3]

When the fair closed, Cleyman licenced his operation to Smitty’s Pancake House in Seattle, who then opened the “Belgian Waffle Chalet” near the university in Seattle. [1]

By January 1964, a Belgian Waffle Shop had opened at the Hillsdale Farmer’s Market in San Mateo, California [4], and a “Belgian Waffle House” company was planning to set up business in Alberta and Manitoba [5].

In 1964, a Belgian man named Maurice Vermersch and his wife (sadly, unnamed in all the accounts) arranged to sell waffles at the World’s Fair held at Flushing Meadows, Queens, New York (actually, both in 1964 and in 1965 – the fair carried over two years.) [6] He sold them at the Belgium Village there (a recreation of a medieval Belgian village) and at several places throughout the fair grounds.

His technique was to use yeast as the leavener, and grease the waffle irons with lard. He served them with strawberries and whipped cream, and sold them for a dollar.

He started off by calling them “Brussels Waffles.” Realizing that most Americans didn’t know where Brussels was, within a few days of selling them, he decided to call them “Bel-Gem” waffles, in a take on “Belgian Waffles.”

In 1968, Belgian Waffles appeared at the HemisFair in San Antonio, Texas. [7]

“Question: (Repeat) Do you know a recipe for preparing small rich cookies (originally Belgian) on the waffle iron?

Answer: As I told you last week several ladies hailing from Belgium kindly sent in recipes they thought might apply to this request. But as is true of so many foreign dishes, certain designated equipment was needed. In the case of these cookies, the ladies who wrote in thought that they could not be properly made unless a special sort of ‘griddle’ or ‘waffle iron’ was employed: French Waffle (Sent in by Mrs. O.D. Waldeck, Saskatchewan): 3 eggs, 3 cups sugar, 1 cup butter, 1 cup cream, 3 tsp. baking powder. Enough flour to make dough that will roll thin like cookie dough. Cut a large circle from the dough that will fit your waffle griddle. Do not have too hot a fire. Flavouring may be added if desired. Cut into small sections and sprinkle with confectionary sugar.” — Let’s Ask Aunt Sal column. The Lethbridge Herald. Friday, 11 January 1952. Page 8.

“In Ghent, where Flemish is the predominant language, the tea speciality is a light Flemish pastry called wafel. In English this is, of course, waffle, also, but differs from our waffle in that it is light and sprinkled with powdered sugar and served with coffee instead of the British tea.” — Burt, Jane. Snails of the Sea are “Treasures” of Brussels. Janesville, Wisconsin: Janesville Daily Gazette. 1 October 1953. Page 5.

“No one would consider visiting Europe this summer without going to Belgium for a look at the Brussels World’s Fair 1958 which opened last month…. Try Black Pudding, eaten with moist sugar and apple sauce or Brussels waffles and Liege rice cakes.” — Existing European Holiday Includes Visit to the World’s Fair at Brussels. Zanesville, Ohio: Sunday Times Signal. 11 May 1958. Page 8a.

“DELICIOUS Belgian waffles, with whipped cream and strawberries, are popular snacks at the Fair. They’re prepared with natural gas, of course. Natural gas has been firmly established as the source of energy of the future — here today — at the Seattle World’s Fair.” — El Paso Natural Gas Company Ad. Idaho Falls, Idaho. The Post Register. 9 September 1962.

“We also took time to late lunch on one of the culinary delights of the Fair, the famous Ben-Gem [ed: sic] waffles. Prepared in the Belgian manner, they’re sprinkled with powdered sugar, ‘stuffed’ with sure-nuf whipped cream and smothered with fresh strawberries. They cost 99 cents — and worth every calorie. There is usually a long line at the ‘waffle bars.’ ” — Whiteaker, Mildred. An Invitation to the Fair. San Antonio, Texas: Express and News. Sunday, 19 July 1964. Page 6-E.

“The Belgian Village was charming—what there was of it — but is still far from completed. Next year it should be one of the finest features of the fair. Don’t miss their fabulous Belgian waffles slathered with huge strawberries and whipped cream. I hear that these are being served at our Minnesota State Fair.” — Lamberton, Gretchen L. The Casual Observer Column. Winona, Minnesota. Winona Daily News. Friday, 4 September 1964. Page 7.

“And before you leave, have a Belgian waffle in the International Plaza, Belgian Village, Lake Amusement Area or at the New International Snack Bar in the People-to-People Pavilion. These huge, tender waffles are loaded with powdered sugar, whipped cream and strawberries, all for 99 cents.” — Crossley, Robert P. Here’s What’s New at the World’s Fair. San Antonio, Texas: The San Antonio Light. 18 April 1965, Page 6.

“Believe me it’s worth the dollar to go into the Belgian Village. This is the biggest exhibit at the fair, virtually a miniature city in itself. In the evening they have entertainment in the village square; and don’t dare pass up those Belgian strawberry waffles.” — Sarmento, William E. Make the World’s Fair A Must This Summer. Lowell, Massachusetts: The Lowell Sun. Sunday, 16 May 1965. P. 44.

Sometimes called “gaufrette”; not to be confused with the cookie that is called a “gaufrette.”

[2] Seattle historians Paula Becker and Alan Stein, co-authors of “The Future Remembered: The 1962 Seattle World’s Fair and Its Legacy” say that : “Century 21’s Belgian Waffle House was managed by Belgian Chef Walter Cleyman, who also ran a smaller waffle booth on the Gayway… In 1964, Vermersch opened a waffle stand at the New York World’s Fair, and, although that fair is often credited with first popularizing the confection, it is Seattle that actually holds the honor.” — Rolph, Amy. Topless women, no booze? 15 surprising facts about the 1962 World’s Fair. Seattle PI. 9 November 2011. Retrieved August 2012 from http://blog.seattlepi.com/thebigblog/2011/11/09/topless-women-no-booze-15-surprising-facts-about-the-1962-worlds-fair/#1663-4

[5] “Public notice is hereby given that BELGIAN WAFFLE HOUSES LTD., a corporation duly incorporated under the laws of the Province of Alberta, has been granted a licence dated the twenty-seventh of January, 1964, and registered, authorizing the said company to carry on its business or objects within the Province of Manitoba….Dated at the office of the Provincial Secretary this twenty-seventh day of January, 1964.” — Winnipeg Free Press. Winnipeg, Manitoba. 15 February 1964. Page 58.

[6] Some accounts say that he first sold them at the 1960 World’s Fair in Brussels. There was no World’s Fair anywhere in the world in 1960. There was one in Brussels in 1958, the 1960 one for Caracas, Venezuela, was cancelled, and the next one was in Turin, Italy in 1961. The New York 1964 one was not actually sanctioned by the Bureau International des Expositions.

[7] “What to Wear at the Fair: THE WISE spectator will choose a skirt wide enough to sit and walk in gracefully yet not so full that it spills on the ground while she’s seated on a bench munching a taco or a Belgian waffle.” — Abilene Reporter News. 31 March 1968. Special HemisFair section.

This web site generates income from affiliated links and ads at no cost to you to fund continued research · Information on this site is Copyright © 2022· Feel free to cite correctly, but copying whole pages for your website is content theft and will be DCMA'd.
Tagged With: Belgian Food