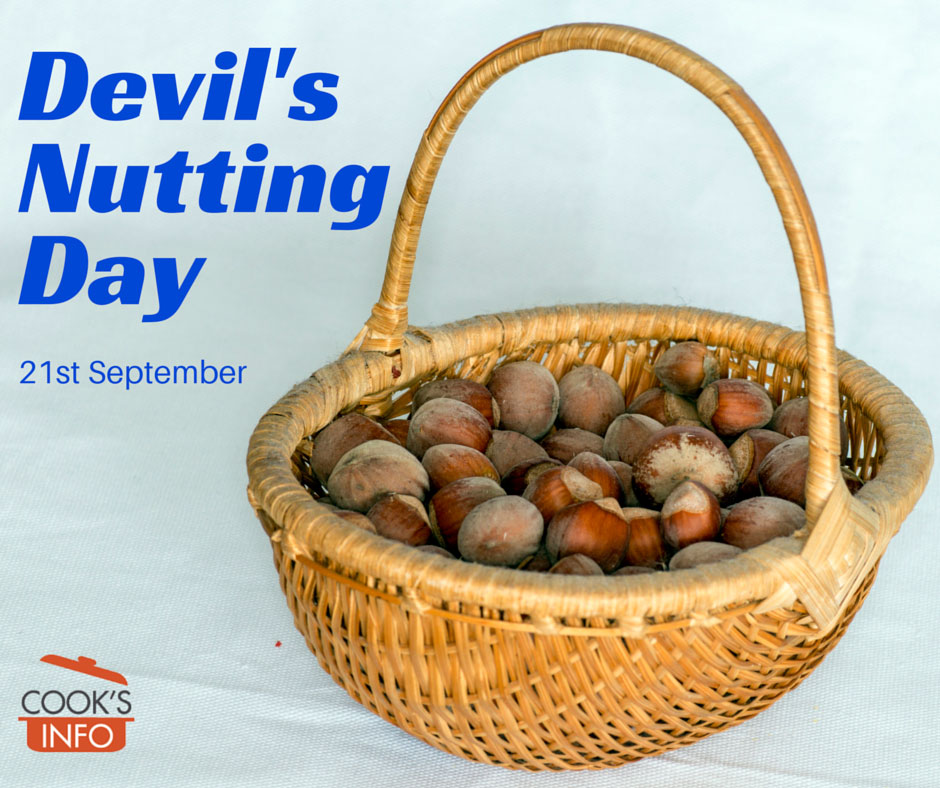 The 21st of September is Devil’s Nutting Day.

It was traditionally the day during autumn nut harvesting season that you did not want to go “nutting”, aka nut picking, because the devil would be out in the woods doing the same that day. Some people would not even walk down lanes on the outskirts of villages on that day, lest they encounter Beelzebub rifling through a laneway bush to fill his basket with hazelnuts.

The scholarly correspondence magazine, Notes and Queries (founded 1849 and still extant), contained an 1872 query with subsequent observations about about Devil’s Nutting Day offered by correspondents:

“Sussex Queries: The Devil’s Nutting Day. When a boy, and living in East Sussex, I remember that on a particular day in the autumn no one would go out nutting, or indeed, if possible, pass along the lanes of the village, fearing to meet his Satanic majesty. I have frequently, in different parts of Sussex in late years, mentioned this; but the devil’s nutting day now seems to be entirely forgotten. Last week, however, a Sussex rector told me he remembered that a schoolmaster always went nutting on September 21, St. Matthew’s Day; and he had some idea it might be connected with the query I ask — if any of your readers know of this old superstition? — H.W.D.” — Notes and Queries. London, England. 4th Series, Volume 9. 20 January 1872. Page 57.

“From fifty to a hundred years ago there was a superstitious avoidance of September 14 among the juvenile ‘nutters’ of Kent. A capital story in reference to this is told still in Maidstone and its neighbourhood. A regiment quartered there had in its band an immense negro drummer. This worthy happened to take a ramble into the neighbouring woods on September 14, and stumbled over a large bag of nuts, which had been secreted at the foot of a tree. Sambo, guessing that it was the hoard of some trespasser, divested himself of his garments, and lighting a short pipe which he had with him, sat down on the sack of nuts with his elbows on his knees, and enjoyed his tobacco. On the ‘free nutters’ coming to the tree for their spoil, the sable possessor treated them to a wild howl — Haro-a-ra-wa-ratl — and the result may be imagined, his sable majesty being left in possession, and the nutters scampering home as fast as their legs would carry them.’ — W.D. (Canterbury).” — Notes and Queries. London, England. 4th Series, Volume 9. 24 February 1872. Page 166.

“William Bowskin, an old man resident at Owmby, near Spital, Lincolnshire, about half a century ago, used to say that nutters on “Hally Loo Day” (Sep. 14) were certain to come to grief of some kind, but I cannot ascertain that he expected the particular interview referred to by your correspondents.” —  J.T.F. (Hatfield Hall, Durham)” — Notes and Queries. London, England. 4th Series, Volume 9. 16 March 1872. Page 225.

“I quite accidentally came across the following:

It was believed that Sundays also were a bad day to gather nuts, because you might meet the devil doing the same thing on a Sunday (as he obviously wouldn’t be in church.)

“By country people in more than one county, I have been warned half seriously, on returning from a Sunday stroll with a pocketful of nuts. ‘If you go a nutting on Sunday, you will see the devil.’ It was firmly believed that one particular Sunday in September was the Devil’s Nutting Day. Nobody knew which Sunday it was, so that every Sunday in the month had to be avoided, and careful cottage mothers might be heard cautioning their children against transgressing this rule, and telling them if they did, the devil would hold up the branches for them.” — September Lore. Stockton-on-Tees, Durham: Northern Weekly Gazette. Saturday, 28 September 1929. Page 10, col. 1.

Nutting Day is on the 14th of September, which is also celebrated as Holy Rood Day (at Holy Cross Day, aka St. Cross Day). It was traditionally a day for organized nutting parties and festivities.

In some people’s minds, though, it was this 14th of September date that was the devil’s day for picking nuts. It’s unclear if this attribution was related to region.

Mention of its association with Holy Rood Day appeared as early as 1709 in Poor Robin’s Almanac, a satirical almanac series published from about 1661 until 1776:

‘The devil, as the common people say,
Doth go a nutting on Holy-rood day;
And sure such leachery in some doth lurk,
Going a nutting do the devil’s work” — Poor Robin’s Almanac,1709’ [1]Quoted by: Mead, Ruth Mary Judith. Wordworth’s Poetry of Allusion. PhD Thesis. University College, London. August 1998. page 136).

“On Holy Rood Day it is faithfully and confidently believed by both old and young that the Devil goes a-nutting on that day and I have heard many people affirm that they once thought it a tale till they ventured to the woods on that day when they smelt such a strong smell of brimstone as nearly stifled them before they could escape out again…” — Poet John Clare to William Hone, 1825.

A newspaper columnist in Buckinghamshire noted that the superstition associated with the 14th of September was alive and well in some locales at the start of the 1900s:

“In other localities, however, [Holy Cross Day] was known as the Devil’s Nutting Day, and was considered the one day of the season upon which nutting ought to be omitted. In Poor Robin’s Almanac for 1709, we find these lines:

‘The devil, as the common people say,
Doth go a nutting on Holy-rood day.’

It has occurred within my own experience that in country places in Sussex superstitious people would not, on any consideration, go into the woods on this day, because, as they affirm, if they did the Devil would be seen gathering nuts. The people not only say this, but they believe it, and act upon it.”  — Some Buckinghamshire Dedications – St. Cross, Quainton. Aylesbury, Buckinghamshire: The Bucks Herald. Saturday, 7 March 1903. Page 7, col. 4.

Several years later, another, or possibly the same, Buckinghamshire writer, affirmed the association with certain villages in Sussex:

“The 14th of this month is known as Holy-Rood Day or the Day of St. Cross… There is a saying in some parts of England that the Devil goes a-nutting on Holy-Rood Day, and there used to be some among the ancientest inhabitants of certain villages in Sussex who were wont to affirm that they knew it to be true from personal observation. The race has now, perhaps, become extinct; but 200 years ago it was so common a saying that it was honoured with a rhyming couplet in Poor Robin.” — Topical Notes: General and Local. Aylesbury, Buckinghamshire: Bucks Herald. Saturday, 23 September 1916. Page 2, col. 6.

Legend said that once, on the 21st of September, the devil had been out gathering nuts in Alcester, Warwickshire, England, when he ran into the Virgin Mary in the forest. He dropped his bag of nuts and fled.

A hill there in Alcester is said to have been formed by the bag of nuts that he dropped.

Locals call it “The Devil’s Nightcap”.

This web site generates income from affiliated links and ads at no cost to you to fund continued research · Information on this site is Copyright © 2022· Feel free to cite correctly, but copying whole pages for your website is content theft and will be DCMA'd.
Tagged With: Nuts