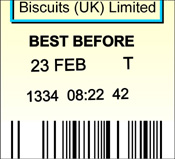 Best Before Date in the UK
Contents hide

They indicate the date after which the quality will no longer be guaranteed, though the food is still regarded as safe to eat.

For items such as canned or bottled food, it applies to the unopened products.

Manufacturers are usually conservative in their estimates, giving a Best Before Date somewhat before what their best guess actually is, because they want to be sure you sample their product while the quality is still good, so you will buy it again. Frozen and canned goods in particular can often retain their quality for some time after indicated “Best Before” dates.

In 2011, government officials in the UK began examining the possibility of doing away with general Best Before Dates, and replacing them with something more specific and useful to consumers (use-by dates would be retained.) The officials feel that current Best Before Dates cause “Best Before Paranoia”, leading consumers to throw out food too soon — an average of close to £700 a year per household. In Britain, as of 2011, 8.3 million tonnes of food and drink were ending up in landfill, with an estimated 5 million tonnes of that still perfectly edible. Each day in Britain, 5 million potatoes, 4.4 million apples, a million loaves of bread, and a million slices of ham are binned.

The London Daily Mail asked Dr Lisa Ackerley, of Hygiene Audit Systems and visiting professor of environmental health at Salford University to examine some items, and suggest alternative best before days. She suggested that a jar of Bonne Maman strawberry jam, labelled best before 2013, would actually be good until 2113, another 100 years, if left upopened. Dried spaghetti, labelled Best Before January 2013, she suggested would be good until 2023.

In the UK, all frozen, tinned, boxed and dried packaged foods sold must have either a “Use By” or a “Best Before” date.

It must be given with a calendar day, month and year, and in a format that the consumer can understand, with the following exceptions:

Food can be sold past the “Best Before” date, but the retailer takes legal responsibility for the quality of any food they sell after the Best Before Date.

A Best Before Date used for shelf-stable items, and is an indicator of quality.

All foods with a shelf life of less than two years must have by law a date stamped on them labelled either “Use-by” or “Best Before.”

A food item may be sold after its Best Before Date has gone by, provided the only thing “wrong” with it is that it won’t have quite the quality of a product whose date hasn’t gone by. To be sold, the food item can’t have deteriorated or have been damaged in any other way besides not being of “optimal freshness”, and it must still be safe to consume.

Date Limite d’Utilisation Optimale (Best Before) is used for shelf-stable products such as tins and boxes. It must be accompanied by an understandable calendar date.

A Best Before Date doesn’t have to be displayed on alcohol products, vinegars, sugars, or candies.

A Best Before Date must be shown on an item having a durable life of 90 days or less if the food item is packaged before it gets to the store. If it requires storage other than at room temperature, the required storage must be specified. Products can be sold after their best before date, but it is illegal to alter any date applied by the manufacturer of the food item.

If the item has a durable life of 90 days or less, and is packaged at the store, the item must display the date it was packaged, and somewhere, either on the package or on a sign at the point of sale, display how long the product is good for. (Canada Food and Drug Regulations B.01.007)

There is no requirement for Best Before Dates on products with a life span greater than 90 days, and if the manufacturer does provide one, no requirement that it be in a format that the consumer can understand.

Can you trust ‘best before’ dates? CBC Marketplace. 21 November 2000. Retrieved May 2006 from http://www.cbc.ca/consumers/market/files/food/bestbefore/

Johnston, Philip. ‘Best-before’ is well past its sell-by date: A ‘use-by’ date would stop billions of pounds of food being thrown away, says Philip Johnston. London: Daily Telegraph. 12 July 2010.