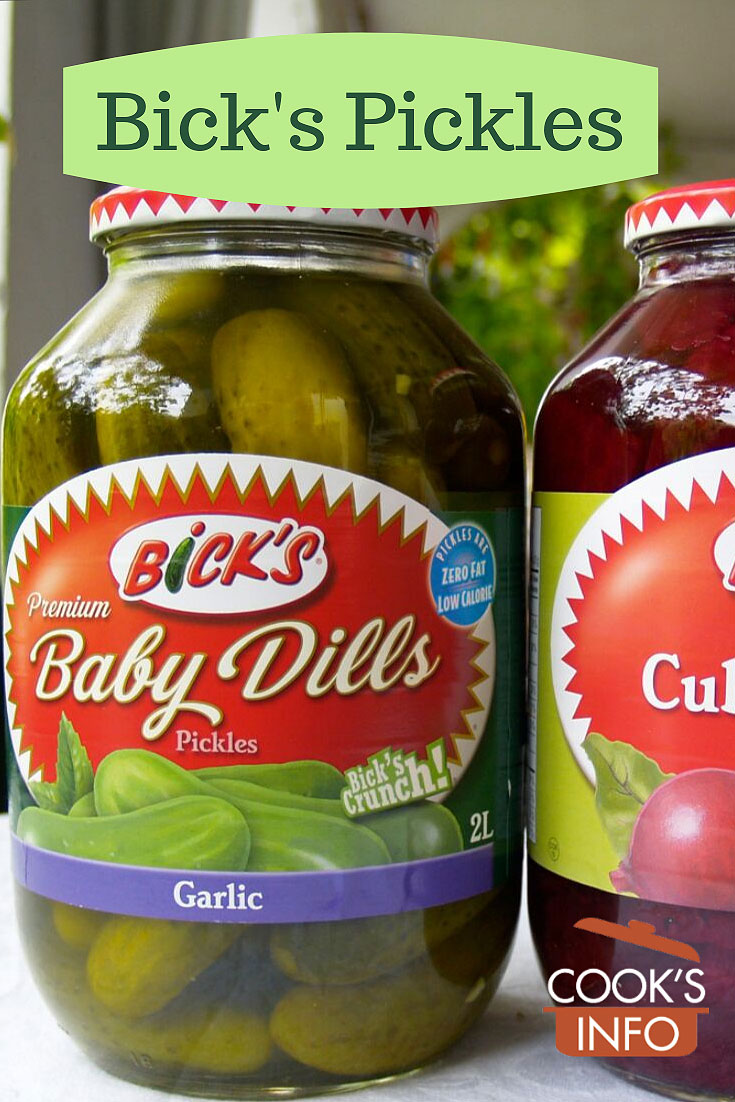 Bick’s are the top line of pickle products in Canada, though the product has actually been made in the United States from 2012 onwards.

As of 2010, Bick’s made 41 different products: pickles, relishes, and speciality items. 85% of the products are cucumber based.

The pickles are fresh-packed into jars within 24 hours of being picked, and covered with a pickling solution.

They were Jewish business people in the clothing trade, fleeing Europe ahead of the coming Holocaust. They got into Canada by posing as Christian farmers. (See Obit below.) In Amsterdam, Walter had met his future wife Jeanny (8 July 1917 – 24 September 2001). Upon their arrival, they sponsored to come to Canada, and the two were married upon her arrival. They would have four children.

They bought a 117 acre [1]An obituary says 160 acres. But several other printed sources say 117 acres. Viz: McLeod, Susanna. Turning a pickle into prosperity. Kingston, Ontario: The Kingston Whig. 3 January 2018. farm in the north part of Scarborough, Ontario, just outside Toronto. They called the farm “Knollview.” Highway 401 runs through the middle of it now, since the 1950s.

They grew grain and hay for their cattle, pigs and chickens, as well as cabbage, cauliflower and cucumbers for market.

Start of the Bick’s Pickle Empire

In the summer of 1944, the weather was warm and humid. The cucumber plants loved it, went mad and produced a glut of cucumbers. So, they dug out a family recipe for pickles from Holland, that George’s mother back in Holland had used. They made the pickles in 50-gallon barrels, which cured out in the barn, and started selling them to restaurants and army camps by the barrel.

Their pickles were very popular, popular enough to become their full time business, so they sold off their cattle, chicken and pigs and focussed on the barrels of pickles.

In 1951, they decided to pack the pickles into glass jars for the consumer market. They renovated a barn to hold the production. They packed 60,000 jars, all by hand. They pasteurized their products, right from the start. In 1958, the barn burnt down, so they built a modern purpose-built building.

In 1960 Bick’s sold 12 million jars of products. At the time, they were producing 33 varieties of pickled products, including pickled onions, gherkins, and relishes including their Sweet Pickle Relish. In 1960, they introduced pimento-stuffed gherkins for their 10th anniversary in 1961. 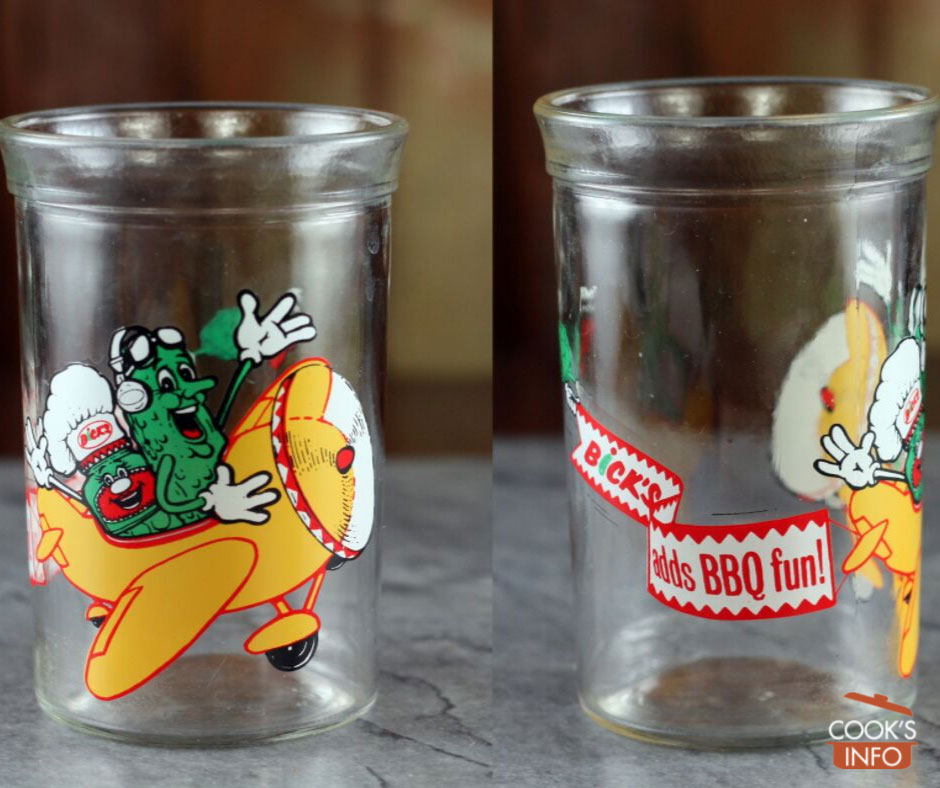 The Bicks exit the business

In 1966, they sold the business to the Robin Hood Canada flour company (which in turn was later bought by International Multifoods of Wayzata, Minnesota), land and everything. The Bick family said the business had just got too big for them to handle.

In 2004, International Multifoods was purchased by the American company, J.M. Smucker. Smucker’s sold off most of the other products, such as the flours, but kept Bick’s.

In 1998, the company opened a brining facility near Delhi, Ontario on a 73-acre farm with 600 vats, with each vat capable of handling 60,000 pounds of cucumbers.

In 2001, Bick’s pickles had by then been produced at the Scarborough facility for 50 years. In November 2001, they moved production to Dunnville, Ontario in the Niagara Peninsula. The Delhi facility stayed open.

Transferring production to the United States

In September 2010, Smucker’s announced that production of Bick’s Pickles at both Canadian plants, Delhi and Dunnville, would be shut down at the end of the 2011 growing season. The products would be made in the US by various producers, and the produce for them sourced there as well. “Bick’s Pickles and condiments, popular in Canada, will be made by Smucker’s fruit spreads plant in Ripon, Wis., as well as by other third-party manufacturers the company declined to identify.” [2]Cho, Janet. J.M. Smucker Co. to close two Bick’s Pickle plants in Canada in 2011. Cleaveland, Ohio: The Plain Dealer. 28 September 2010.

Obituaries for Walter and Jeanny

Walter and Jeanny survived the horrors of the Holocaust by posing as Christian farmers – they were neither Christian nor farmers – but that was the only way they could get into Canada in 1939. They put heart and muscle into their 160-acre-farm next to what is now the Scarborough Town Centre. The farm was not only their refuge but became their salvation. A glut of cucumbers in 1944 presented a dilemma – plow them under or get creative. They got creative and Bick’s Pickles was born. The barn turned into a factory and Bick’s became a household name. Less than 30 years after arriving in Canada as refugees, Bick’s was sold to Robin Hood Flour and Walter and Jeanny retired from business.

They spent time travelling, skiing, hiking, collecting… but more than anything they actively sought out ways to help others. They were mentors to many, many people – young or old, friends or strangers. There is hardly a person who met them who was not touched by their generosity – their extraordinary generosity! In a more formal role, Walter and Jeanny worked with Canadian Civil Liberties Association, June Callwood’s ground-breaking projects, Jewish Vocational Services, Weizmann Institute, ORT, Integra Foundation, Baycrest Foundation, Canadian Professors for Peace in the Middle East, Bezalel Academy of Art, Israel Museum, Canada-Israel Cultural Foundation and other organizations, above and below the radar. They took on each project with full commitment – just like the farm or Bick’s Pickles – it was the only way they knew how to operate.

Walter died at age 94 after suffering a stroke. Jeanny had succumbed to cancer ten years earlier. Walter and Jeanny had been married for 62 years – a marriage of deepest love, respect and mutual consideration. Through all the years whether on the farm, building Bick’s Pickles, working with various organizations, they always worked together – that was their hallmark. The years since Jeanny died were tough for Walter – life just didn’t have the same spark. Nonetheless, he was continually preoccupied with anticipating the needs of others. Right up until the end, coming in and out of delirium he would ask pertinent, incisive questions about people’s welfare – what a fine example of how to live a life. Walter and Jeanny leave behind their four children – Catherene, Robert, Frances and Eric, thirteen grandchildren and seven great-grandchildren. The family especially wishes to thank Sonam Choeden (Infinite Care Inc.) and her delicate and tireless staff – Nima, Dolma, Dolker, Namgyal, Kunchok and Choesang – for their exquisite loving-kindness as they cared for Walter over the last years. The family will sit Shiva at 44 Charles St. W., Apartment 519, from 2-6 p.m. on Thursday, Friday and Sunday.” — Published in the Toronto Star on Oct. 19, 2011, online at https://www.legacy.com/obituaries/thestar/obituary.aspx?n=walter-and-jeanny-bick&pid=154197144

CBC. Walter Bick gets out of a pickle. Radio Interview with Walter Bick, conducted by Ken Cavanagh. 24 August 1961. Retrieved October 2010 from http://archives.cbc.ca/economy_business/consumer_goods/clips/16822/

This web site generates income from affiliated links and ads at no cost to you to fund continued research · Information on this site is Copyright © 2023· Feel free to cite correctly, but copying whole pages for your website is content theft and will be DCMA'd.
Tagged With: Canadian Food