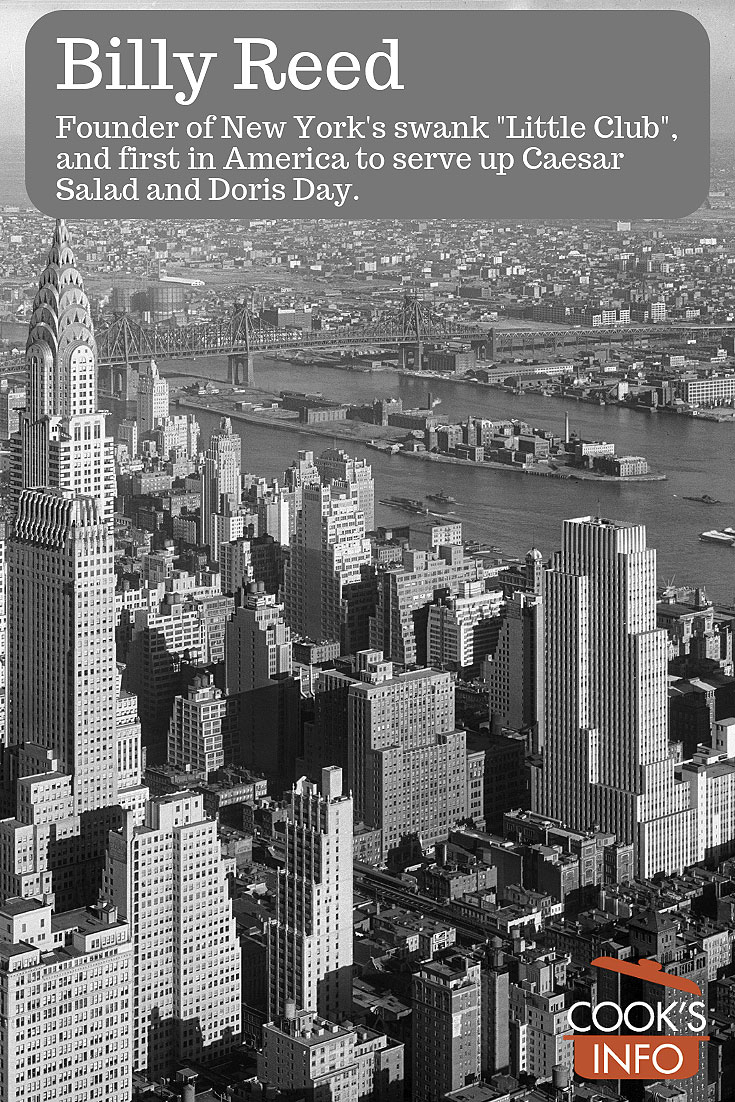 Billy Reed’s was probably the first restaurant in America to serve Caesar Salad, and certainly popularized it as the press became aware that the stars frequenting his club were eating a “garlic” salad.

At Billy Reed’s, Judy Garland met Sid Luft (her husband from 1952 to 1965), a piano player named Cy Coleman (1929 to 2004) got his first job playing cocktail lounge music (before he went on to write songs such as “Witchcraft”, “The Best is yet to Come”, “Hey, Look Me Over”, and “Big Spender”), and the world first got a look at an unknown singer named Doris Day.

Billy Reed was born in Waterbury, Connecticut. He left home at the age of 14 to work in a minstrel show, then worked in burlesque. At the age of 21, he was a member of the “Gordon, Reed and King” trio performing vaudeville at the Palace Theatre in New York.

He wrote some gags for Bob Hope and Al Jolson, taught himself tap dancing, and did the first male tap-dancing routine in a talkie movie (dancing to “Tip-toe through the Tulips” with Ann Pennington in “Gold Diggers.”) Later he also performed as part of a trio called “Jackson, Irving and Reed”; danced in films such as “Laugh Parade”, Cole Porter’s “Fifty-million Frenchmen”, and “42nd Street”; and was dance director and assistant producer at the Copacabana during Monte Proser’s time there.

In the Second World War, Reed was in the navy. While stationed in Paris, he hit upon the desire to open in New York the type of café he’d seen in Paris, with both good food and good music.

Opening of The Little Club

When he was discharged from the naval service at the end of the war, he parlied up enough cash to open the “Little Club” on New York’s East Side at 70 East 55th Street on 26 February 1947.

For the opening, he took a chance on an unknown singer named Doris Day. Doris was in between jobs. She had just finished up as lead vocalist for the Les Brown orchestra, and was about to appear in the film called “Romance on the High Seas.” She appeared at the “Little Club” on her own as a soloist. She was a huge hit and helped to put Billy’s on the map. 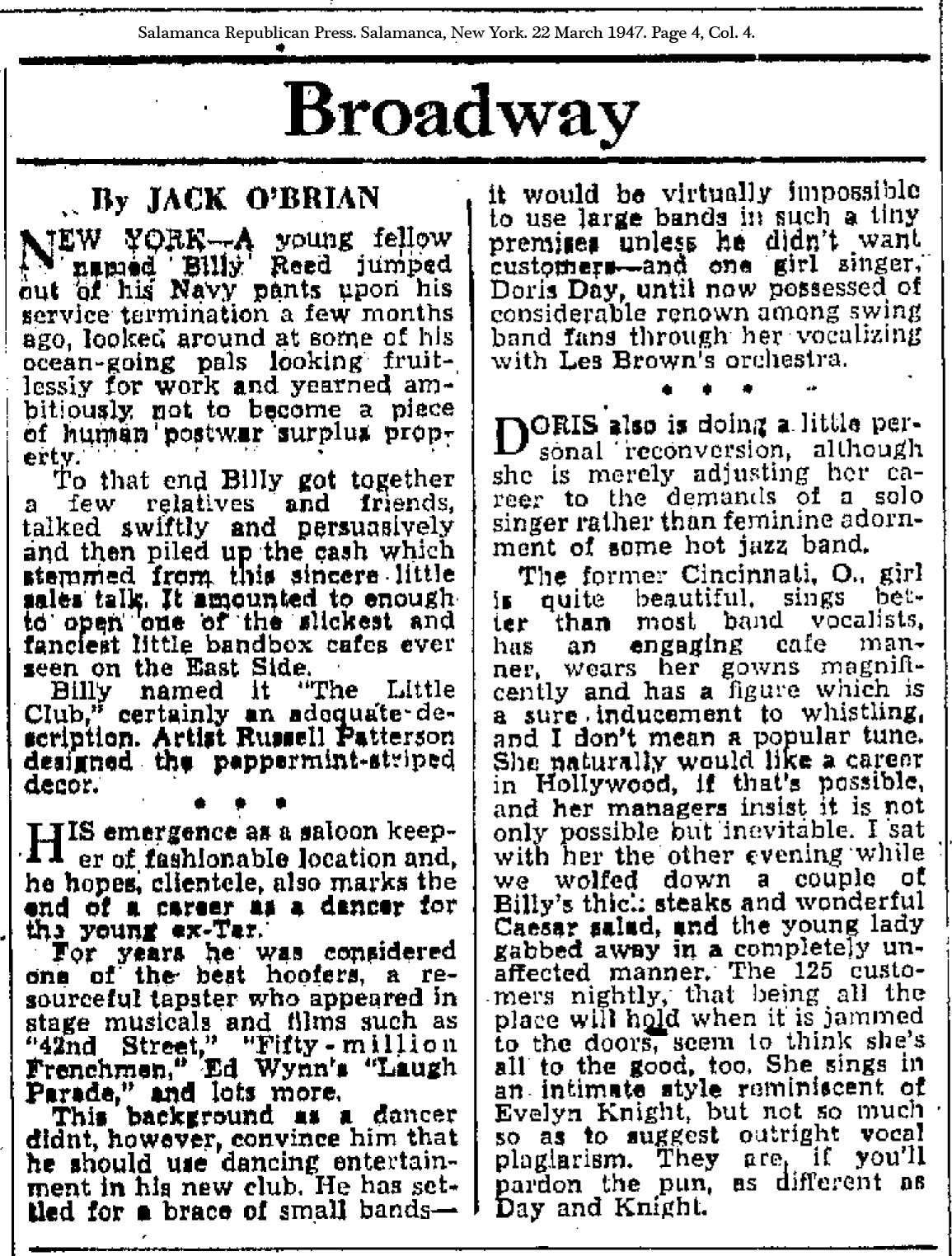 Doris Day at the Little Club, March 1947, with mention of the club’s famous Caesar Salad.

Billy’s club could seat up to 125 people. Outside, it had a peppermint-striped canopy (designed by Russell Patterson), which became the club’s insignia. Open till at least 3:30 am, his club became the hangout for show business people.

Food at the Little Club

Billy’s was known for its steaks and Caesar salad. The “Reed Cut” of beef was prime rib on the bone, served with baked potato (with sour cream or butter) and chives, and French-cut string beans, for $5.25 in 1957 (a lunch version cost $3.45.) In 1957, lunch prices started at $2.25, dinner from $4.00. The club also served squab with wild rice, capon soufflé, Beef Stroganoff, and chicken in a champagne sauce. The kitchen, though, would of course do what it could to accommodate the stars. Julie Andrews always asked for a potato sandwich to be made for her: two pieces of buttered bread with a filling of sliced boiled potatoes, drizzled with more butter (melted), and seasoned with salt and pepper.

The club’s Maître d’ was named “Roberti.” Another of Reed’s chief helpers, a man named “Maurice”, left around January 1954. He was replaced by a Jan Woyczynski, a former captain in the Polish army. In 1955, Reed helped organize Christmas entertainment — on site and in person — for American servicemen stationed in Goose Bay, Labrador and in Thule, Greenland.

In October of 1956, a water-main into the club burst, so Reed served champagne to anyone asking for water. 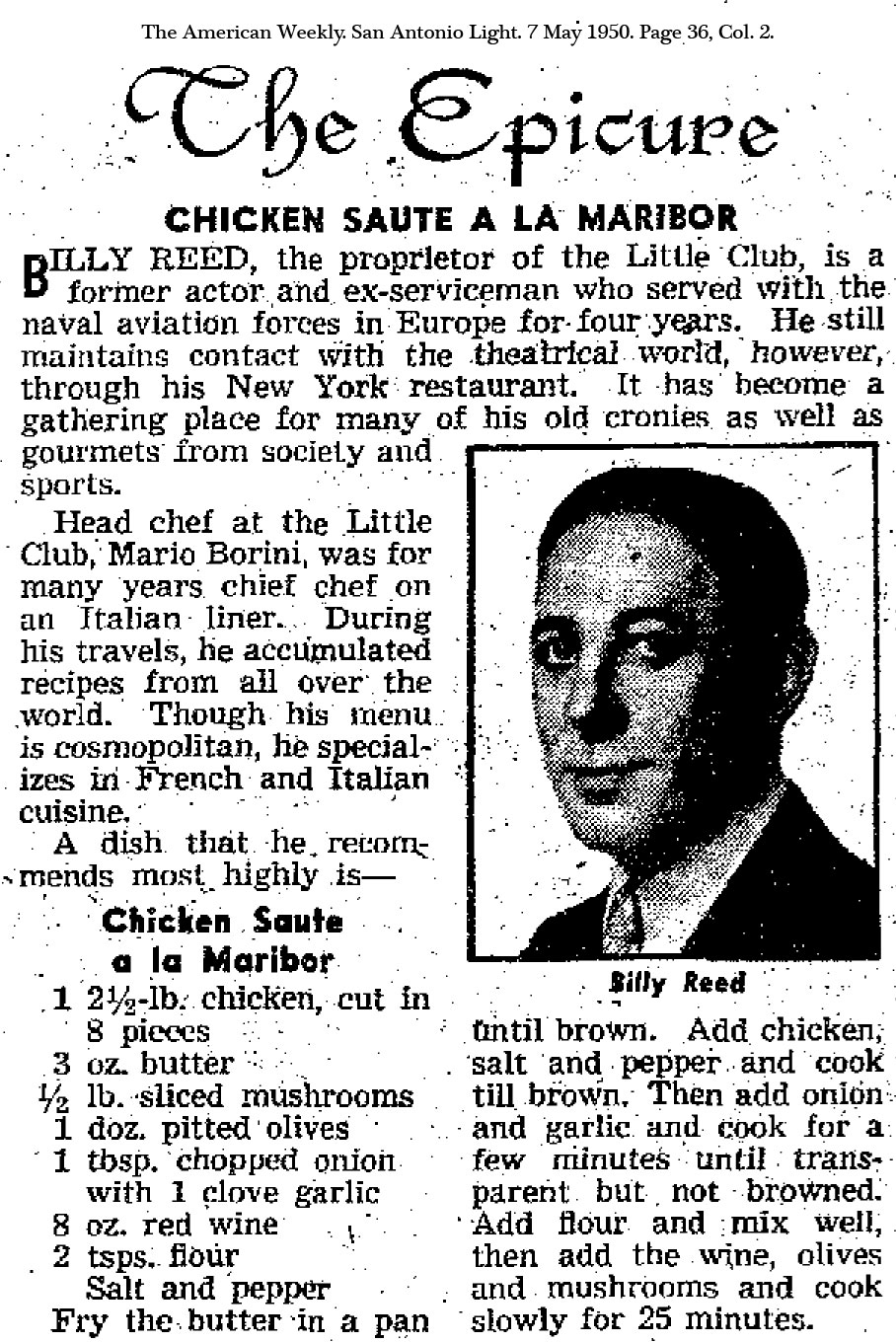 Caesar Salad was invented in Tijuana by Caesar Cardini sometime in the 1920s. His partner, Peter Frigerio, came to work at the Colony and the Marguery in New York, then moved to Hollywood to work by 1947. It’s possible that Billy got the recipe in New York through contact with Peter Frigerio (this is speculation). In any event, in the view of Howard Hughes’s press agent, Johnny Meyer, it was worth phoning Billy’s from Acapulco in September 1947 to get the recipe: “Johnny Meyer still slathers the dough around. He phoned from a party at Acapulco, Mexico, on the far west coast, to ask Billy Reed at New York’s Little Club his recipe for Caesar salad.” (Jack Lait. “Broadway and Elsewhere” column. In Nevada State Journal. Reno, Nevada. Wednesday, 3 September 1947. Page 4.)

“Why set the clocks ahead an hour at 2 a.m. Saturday nights — our best night? It’s against the law to serve likker after 3. Why not set them ahead at 3?” — Billy Reed, quoted by Walter Winchell in his “On Broadway” column. Mansfield News Journal. Mansfield, Ohio. 15 May 1956. Page 13.

“Popular Billy Reed will have two orchestras playing for dancing — and records will be out — when he becomes managing director of Joe Norban’s El Morocco, Oct. 20. Reed, who just resigned a position at Revlon, formerly operated the Little Club and gave New York its first look at a singer who became pretty well known — Doris Day.” — Earl Wilson in “It Happened Last Night” column. The Times Recorder, Zanesville, Ohio. 10 October 1969.

“It wasn’t an “in” place, more of a chic place. It was located in the mid 50s around Madison and park Avenues in New York City and was the elegant supper club called Billy Reed’s Little Club. The cuisine was continental, the dance music was slow and romantic, the clientele was gracious and almost courtly. One evening there, my companion and I sat next to Broadway actor Sheppard Strudwick and his lady. We chatted informally. I know the host Billy Reed was a former dancer. Anyone know about him? — Jerry De Fuccio.” Young at Any Age: Does Anyone Remember? Column by Emily Wilkens. Clearfield, Pennsylvania: The Progess. 7 August 1989. Page 5.

“It’s undeniable that certain charms of the 1950s have been lost for ever… High society went out every night and tripped the light fantastic to starchy orchestras like Raoul Zequeira’s and Lester Lanin’s, or drank late into the dawn at the Blue Angel on Third Avenue and 55th Street. Television finished around midnight, so people stayed out late looking for action at the Little Club or the Tender Trap.” — Taki. The death of New York’s nightlife. London, England: The Spectator. 18 May 2019.