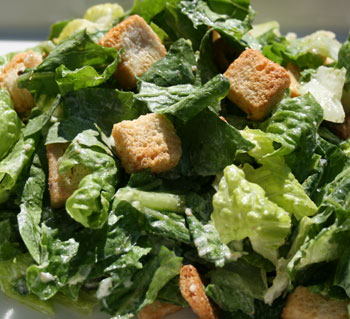 Contents hide
Caesar Salad was invented in 1924 in Tijuana, Mexico, by a man named Caesar Cardini who ran the restaurant and night club called “Caesar’s Place.” At the time, Tijuana was a hotbed for nightclubs and eating out, being just across the Mexican border — a border which during the 1920s meant that on one side you could get alcohol, on the other (the American side) you couldn’t.

Caesar’s version used Romano cheese (instead of Parmesan, which we now do), 1-minute coddled eggs (instead of raw egg yolk), and whole romaine heart leaves, which he meant people to eat with their fingers. He also used lemon juice, olive oil, garlic and croutons, as we do now. Worcestershire sauce and anchovies, though now considered “traditional” in most versions, were not a part of Caesar’s original version, making their appearance around 20 years later in the 1940s.

If you are serving Caesar Salad with a really good bread, you may wish to leave out the croutons. The salad won’t be authentic without them, but then, you probably don’t have Cardini’s original recipe for his croutons, anyway.

Some sources say that Cardini named the salad at first “Aviator’s Salad”, until he re-named it after himself. Some versions of the history just say “1920s”, as opposed to 1924; some say he created it for a group of aviators eating at the club; some say it was a bunch of Hollywood big wigs. Some versions even say that it wasn’t Cardini who cobbled it together; that it was his aunt or his brother.

Caesar Salad got its first, uncertain mentions in the American press in 1947, when gossip columnists started noticing that the American stars of stage and screen were eating it. The first restaurants in America to be mentioned for serving it were Billy Reed’s “The Little Club” at 70 East 55th Street in New York City (a hangout for stars in New York, with Doris Day — unknown at the time — singing on opening night on 26 February 1947), and at Henri’s in Hollywood. Middle America remained uncertain for a long time about a salad that had garlic in it. The version served at Billy Reed’s club is given below.

It may have been Clementine Paddleford who first presented it to a broad audience of Americans, in her 13 April 1952 column in This Week magazine, after she was served it at the Gourmet Room in Cincinnati’s Terrace-Hilton Hotel.

Though Worcestershire sauce, anchovy and Parmesan cheese are not considered original to the recipe, they seem to have inserted their way into it by the late second half of the 1940s.

I cunningly traced this smell (or scent, in the case of ladies making that much dough) to Hollywood’s great delicacy, the Caesar Salad.

Stomachs, start drooling. The Caesar Salad, which Mike Romanoff’ll let you have at a sacrifice — only 2 Bucks — is glorifed garlic. It’s garlic with glamour.

The first time I heard of a 2-buck salad, I wanted to render under Caesar what was Caesar’s — a big, loud razzberry.

Then my beautiful wife, Rosemary, pointed out that it was an aristocrat of foods.

Like stone crabs in Miami, Oysters Rockefeller in New Orleans, lobsters in Boston, cream cheese and bagels in New York.

“Why do they call it Caesar Salad?” I kept asking.

And finally I found it was invented by an Italian named Caesar Gardini [Ed.: misspelling in the original article] in his Tiajuana [Ed.: sic] restaurant, called Caesar’s. Edmund Lowe tasted it there and brought it to Hollywood. Caesar’s ex-partner, Peter Frigerio, formerly at the Colony and Marguery in New York, is now a captain at Henri’s here where, of course, you can get a wonderful Caesar Salad. But confidentially, the French-born Henri de Charpentier, who’s chef there and used to be at Lynbrook, L.I. [ed. Long Island, NY], thinks it’s a big mistake to down such a huge glamourous salad before the main course.

Because, for the most cockeyed of reasons, the Californians do eat their salads before the main course.

A little girl here of about 9 was heard telling her mother she’d run into one of those freax Easterners. “They’re so funny, mama,” she said “They eat their salad after the meat.”

Chef Henri says, his 250 pounds trembling with indignation, “How can you start with a salad and appreciate the wonderful food that’s to come? I’ve never seen it in the world before. Dat’s against good eating. It’s a grave mistake.”

“I think the waiters started it,” Peter says “Dey served the salad first to get rid of the customers and get a quick turnover.”

So that you can all enjoy some of this delicacy, even in your little huts (like mine), my B.W. [Ed. “beloved wife”] smuggled out Romanoff’s [Ed. sic] Caesar Salad recipe. This was on a previous trip here.

Then she tried making one, with me helping. “The tough part is coddling an egg,” she told me. “I’ve coddled you for so long an egg will give me no trouble,” I said.

Here’s the recipe: Upon getting up in the morning, say around 3 in the afternoon, slice some French bread into ½ inch hunks. Fry these in butter. Brown slightly. (Any shade of brown at all, khaki is very nice). Let cool. Then rub the hunks with garlic. Does the joint start to smell a little? I though so. Nice going keed…..

Then cut up a head of romaine lettuce into salad bowl. Add garlic bread. Mix some garlic in olive oil (there’s more damned garlic in this salad), add that, then losing your head completely, heave in juice of 1 ½ lemons, plus a dash of Worcestershire sauce. Next you coddle an egg and break it into salad bowl. Toss in fresh-ground pepper until you sneeze five times, add salt, 4 or 5 teaspoons of Parmesan cheese and, if you really want to live dangerously, some anchovies. Stir till arm falls off, hold nose, and serve….

Try it, what can you lose but your stomach. Some people out here say you can eat all that garlic and, because of the climate, absorb and never smell up the joint with it. That’s what they say…..” — Earl Wilson. “Dressing Up Garlic”. New York Post. Appearing in The Times Recorder. Zanesville, Ohio. 1 February 1947. Page 4.

“The prime culinary production of a village [Ed.: Hollywood] that goes in grimly for productions is the Caesar salad, a vast, garlic-ridden thing that is consumed by the bale before the meal is lugged in.” — Bob Considine. “On the Line” column. In “The Charleston Gazette”. Charleston, West Virginia. 6 February 1948. Page 12.

By 1950, a bottled version had appeared — though you still had to add your own egg to it. Note that the Gourmet Magazine writer refers to “anchovies” as being amongst the “correct ingredients”.

“California’s famous Caesar salad takes its name from its dressing. Now the dressing has been put into bottles so anyone anywhere can serve this creation with all its elegant flavor—without the ritual in making. Louis Milani Foods, Inc., have captured the Caesar taste for a new dressing which includes all the correct ingredients, anchovies, cheese, everything except one coddled egg, please. You add the one-minute egg, a little last touch of perfection, just as the dressing is served in Restaurant Row, La Cienega Boulevard, in Los Angeles. (But neither are you wrong if you break the raw egg in.) Have the chilled greens in the bowl, broken lettuce, preferably romaine, in goes the egg, then the dressing, now toss. Dip the croutons in a small amount of dressing, add to the salad, toss again, and serve immediately. It’s as simple as that!” — Paddleford, Clementine (1898 – 1967). Food Flashes Column. Gourmet Magazine. March 1950.

“The most on a Monday in Manhattan is the Little Club on East 55th Street, just west of Park. Monday is Twist night and if you follow the advice of Billy Reed the guiding genius, you will order a little private dance floor put down beside your table, and you will feast on his True Caesar Salad, made according to the authentic and unchanged recipe that Errol Flynn discovered in Tijuana and introduced to Hollywood.

With a note of sadness Billy Reed speaks about the many tossed green atrocities committed in the name of Caesar. He insists that only romaine may be used and that the croutons must be of sour rye bread. At the Little Club they put about 2 inches [5 cm] of coarsely chopped garlic in the bottom of a quart [litre] bottle of olive oil. Then let it stand overnight. [Ed: 21st century safety precautions now dictate to refrigerate this, and use within 2 to 3 days to avoid botulism risk.] To save time you might use an electric blender. You will need at least 4 cloves of garlic to 1 cup [250 ml] olive oil. 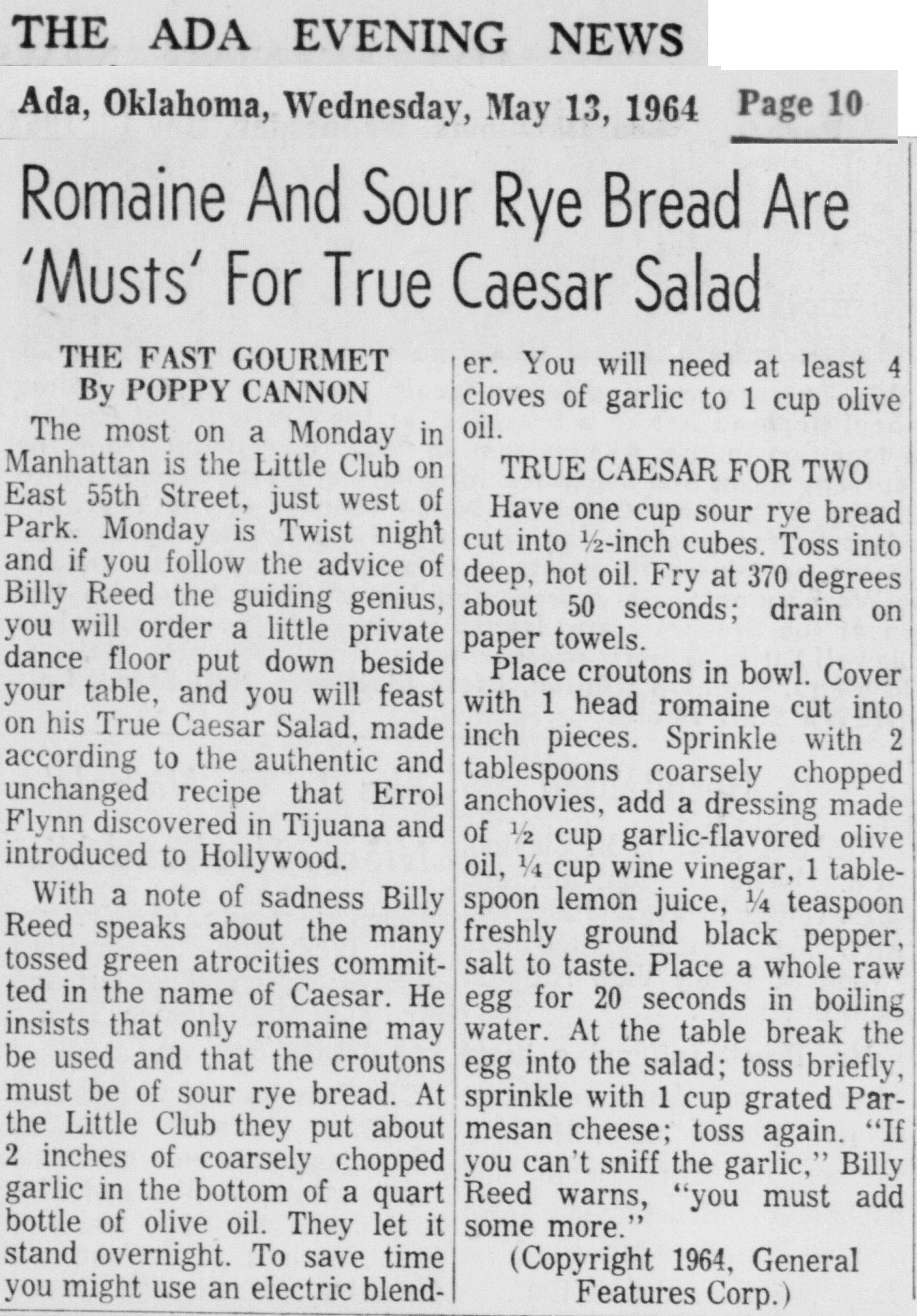 Caesar’s last name is occasionally mispellt as “Gardini”, but that is just a misspelling (which dates back to at least 1947 — see above).

This web site generates income from affiliated links and ads at no cost to you to fund continued research · Information on this site is Copyright © 2022· Feel free to cite correctly, but copying whole pages for your website is content theft and will be DCMA'd.
Tagged With: American Food, Salad Dressings