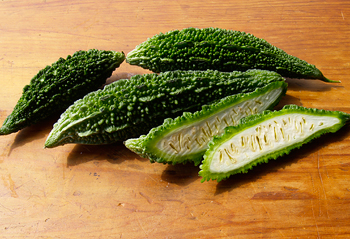 Bitter Melons are an Asian, tropical gourd with a bitter taste that comes from naturally-occurring quinine in them.

They have ribbed, warty skin, and are oblong, like a small, fat cucumber. Both the fruit and the leaves are used.

They grow on an annual, climbing vine that produces both male and female flowers.

The skin ripens from emerald green to orangey-yellow. The ripest ones are the most bitter. When younger, when the skin hasn’t developed any orange yet, the melon will have a mildly sour taste and be less bitter. When the skin is orangey, the sourness disappears and the taste turns sharply bitter. Most people prefer it like this.

If not picked and left on the plant, the melon will eventually split open into parts that curl backward somewhat, looking like an opened mouth with curled lips, and expose the seeds.

The leaves are also used when young. They are often sold on their own in Asian markets.

There are many cultivars throughout Asia. Some are quite long, some are more bell-pepper shaped. Those with pale green skins are often referred to as “white” ones.

A larger variety called “Chinese Bitter Melon” is not as bitter. Compared to ones grown in India, they are larger, and a paler green.

It is being grown in Australia in the Northern Territory and in Queensland, though Australian farmers have decided they would never be able to compete with Asian prices.

The bitter taste is much more interesting when used in a dish and balanced by the taste of other dishes,

If you are using Chinese Bitter Melon, remove both the seeds and the stuff around them. It is easier to remove the seeds in Indian Bitter Melon, which are much smaller, bright red and embedded in the flesh.

When you clean all this out, you are basically just left with a thin layer of flesh.

Parboiling in salted water first will reduce some of the bitterness. Or, slice, roll or press slices in salt. Let sit for up to 20 minutes, then press to squeeze the bitter juices out.

Bitter Melon is considered to have various medicinal qualities in Asian herbal medicine, and in the way of the world devised to torment children everywhere, the more bitter-tasting it is, the better you are told it is for you.

This web site generates income from affiliated links and ads at no cost to you to fund continued research · Information on this site is Copyright © 2021· Feel free to cite correctly, but copying whole pages for your website is content theft and will be DCMA'd.
Tagged With: Gourds