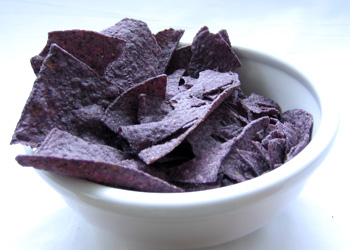 Blue Corn is a variety of flint corn that is blue.

It is also a variety that is harder to grow. It produces a lower yield than other types of corn, and its stalks tend to just fall over in the fields. In compensation, it has more of a “fuller” corn flavour than white or yellow corn. The flavour is sometimes described as sweet and nutty. These factors lead to its being more expensive than other types of corn.

It is very popular for the flour that can be made from it for tortilla chips. The kernels can also be used for posole.

Turns a light purple when cooked.

The protein in it is also considered to be a more “complete” protein than in other corns, owing to the higher levels of lysine in it. [Ed: note “more complete”, not “complete”, as some sale sites advertise. [3]