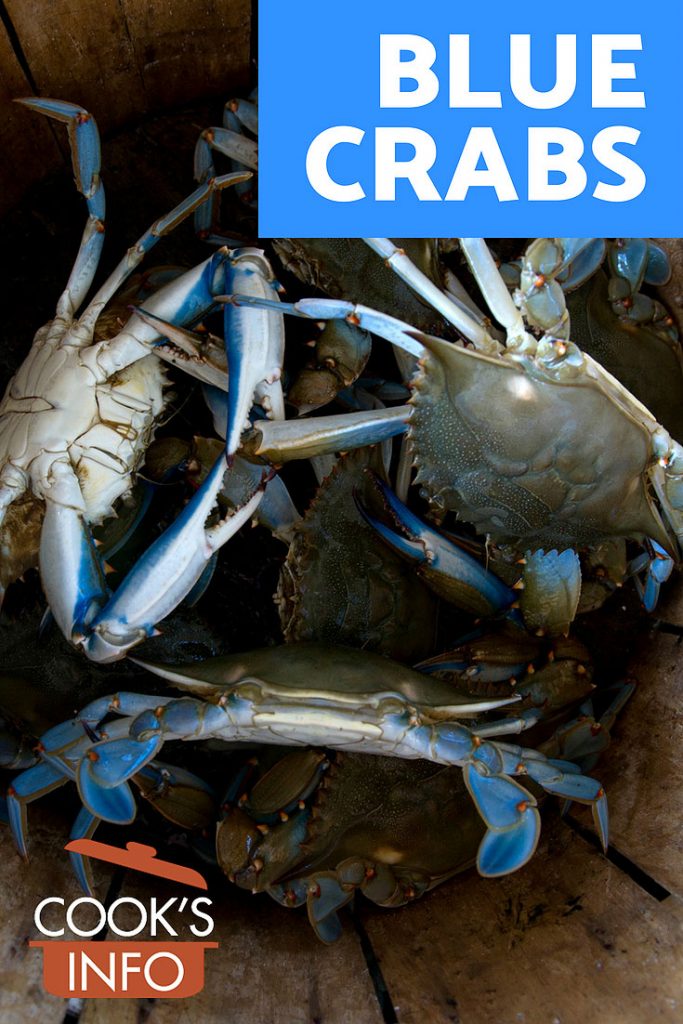 Blue crabs get their name because although their bodies are a dull brown, sometimes tinged with olive or some blue, their claws are usually reliably tinged with blue. A Smithsonian observer writes,

“It is easily identified by its body color which is generally a bright blue along the frontal area, especially along the chelipeds [ed: claws]. The remainder of the body is shaded an olive brown color.” [1]K. Hill. Callinectes sapidus Indian River Lagoon Species Inventory. Smithsonian Marine Station at Fort Pierce. October 11, 2004. Accessed August 2018 at https://www.sms.si.edu/irlspec/ Callin_sapidu.htm

Blue crabs are found along the North and South American Atlantic seaboard, as well in the Gulf of Mexico and parts of the Caribbean. “[Blue crabs are] widely distributed and native within the western Atlantic Ocean from Nova Scotia, northern Massachusetts and Maine to northern Argentina, encompassing Bermuda, the Caribbean Sea and West Indies. Blue crabs have also been deliberately introduced in several parts of Europe and Asia.” [2]Parasram, Jenelle. Callinectes sapidus (Blue Crab). University of the West Indies. 2015. Accessed August 2018.

They have also become naturalized in the Mediterranean where, though some class it as an invasive species, it now supports important commercial fisheries, particularly in Turkey. “The blue crab has become established as a non-native species in the Mediterranean basin. Holthuis and Gottlieb suggested that C.sapidus was transported to the Mediterranean in ships’ ballast tanks. The blue crab was first recorded in the Mediterranean in Egyptian waters in the 1940s. Subsequently, it has been reported in the coastal waters of Italy, Israel, Greece and Turkey. Most recently, it has been reported in the Bay of Biscay, along the northwest coast of Spain.” [3]Canan Tureli Bilen and Irem N. Yesilyurt. Growth of blue crab, Callinectes sapidus, in the Yumurtalik Cove, Turkey: a molt process approach. Central European Journal of Biology. January 2014, Volume 9, Issue 1, pp 49–57. 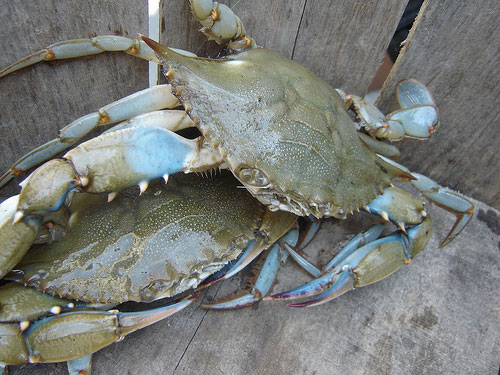 Male blue crabs are called “jimmys”; they have blue claws. They have on their undersides what looks like a picture of the Washington Monument.

The meat of males tends to be flakier than that of females.  A male blue crab will reach its maturity within a year, and be about 20 cm (8 inches) across. 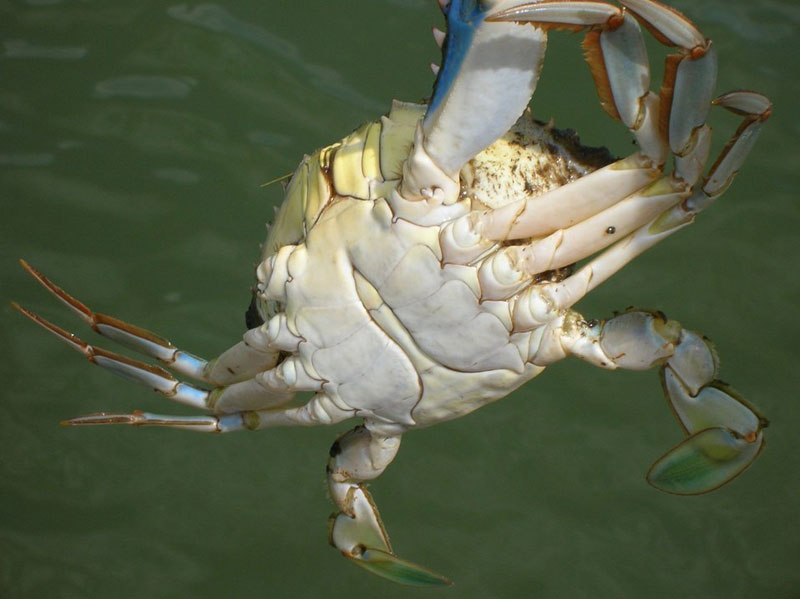 Female blue crabs are called “sooks.” (A young immature one is called a “sally” / plural “sallies”.) Females will have a slightly less-wide body than males.

Like the males, the females also have blue claws, but the tips will be tinged with red. On their undersides, mature females have what looks like a picture of the Washington Capitol dome. (The shape on immature females will be more triangular.)

The meat of females tends to be denser. The roe of females is considered a delicacy by some. 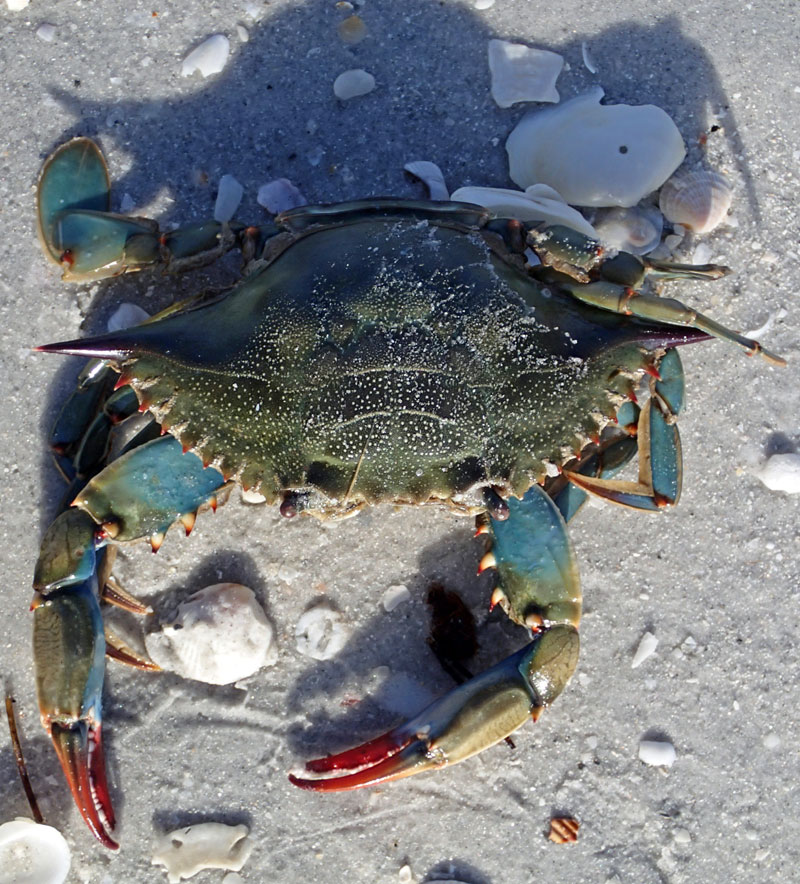 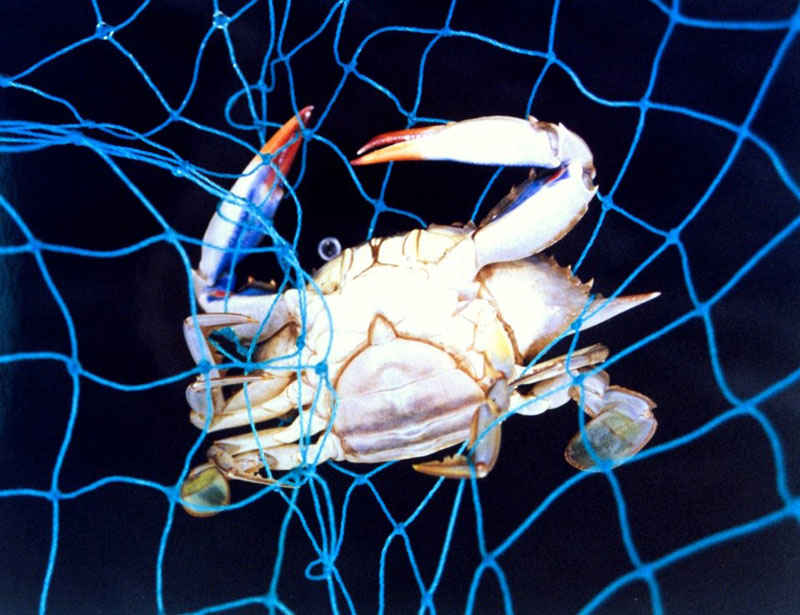 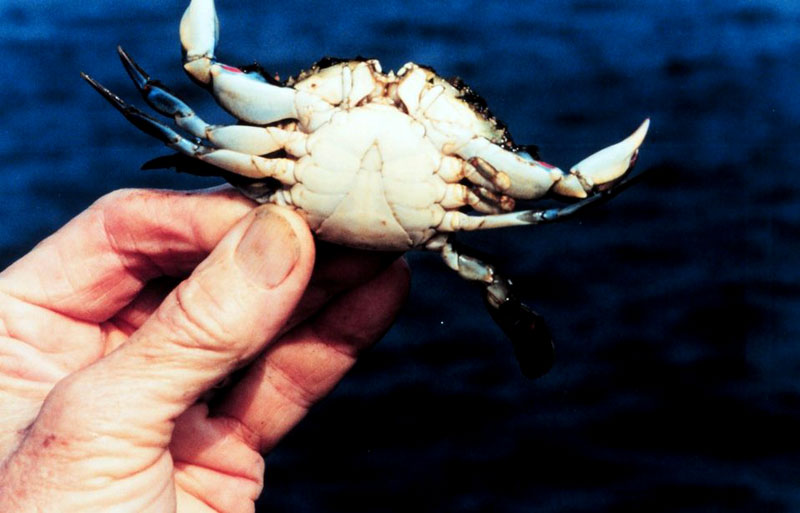 Males are usually preferred for eating because they grow larger, and crab catchers tend to prefer to leave females in the water to spawn more crabs. Some people express a taste preference for males, or females, but many experts say there is no taste difference.

“While all the crabs caught are the same species, the difference is the way in which the crustaceans are cooked. ‘The crabs from our waters are steam-cooked,’ says Andy Hoffman, owner of Pikesville’s Gourmet Again. ‘Crab that is steamed-cooked doesn’t lose the mustard. Most of the crabmeat south of North Carolina and on the Gulf of Mexico gets boiled.’ Crabmeat sourced from South America lacks the rich flavor that is particular to Maryland crabs. ‘Flavor is lost in boiling,’ Hoffman says. And crabs from Southeast Asia get pasteurized and taste metallic, ‘like a tin can.'” [4]Marion, Jane. Crab Basics. Baltimore Magazine. July 2014. Accessed August 2018 at https://www.baltimoremagazine.com/ 2014/7/29/crab-basics 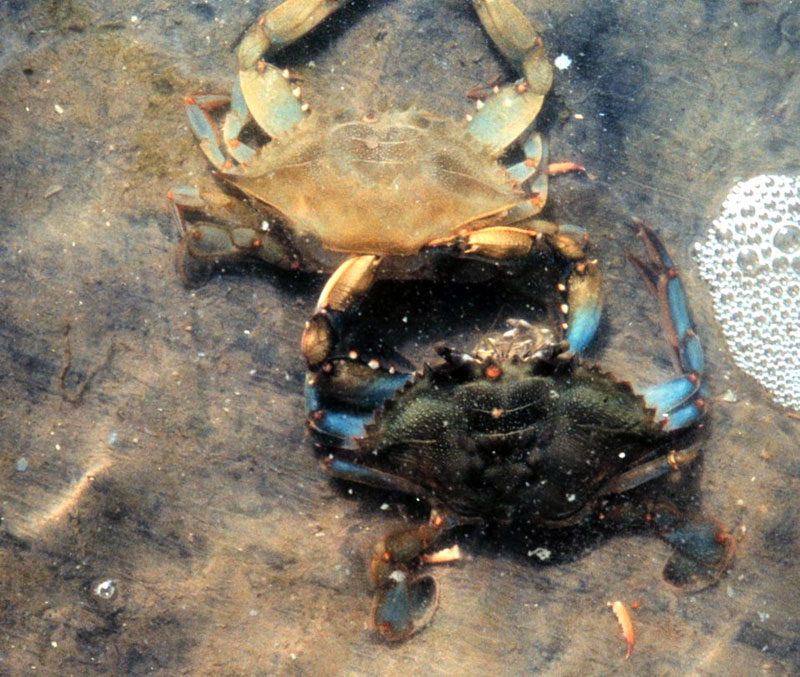 Having reached the ‘buster’ moult stage, a blue crab sheds its shell. At the top of the photo is the old shell being left behind. Mary Hollinger / National Oceanic and Atmospheric Administration / 2014

When the crab sheds its shell for a new one, it becomes a “soft shell crab” for 6 to 8 hours, until it grows the new shell. All types of crabs shed their shells, but the blue crab is one of the few that is eaten at this stage, and the only one sold commercially in soft shell form (as well as hard shell.)

Crabbers catch crabs, and examine them, looking for a thin line along the crabs back fin. Crabs with this marking are going to shed soon. They are placed into holding tanks: one tank for those with white lines, who will shed in just over a week, and those with pink lines, who are going to shed their shells in the next day or two. These are called “peelers.”

If the line is red, the crab is going to bust out of its shell any time now. These are called “busters.” As soon as the crab has shed, it is hustled off to market as a soft-shell crab, which commands a higher price than a hard-shell crab.

Blue crabs are cannibals and will happily eat their fellow blue crabs if they come across them while they are in their vulnerable soft-shell phases.

The mating process of the blue crab

Blue crabs mate in the coastal marshes and swamps. Most are loners and tend to only seek out others of their kind for the brief time they spend mating.

Females need to mate only once in their lives: after that, they store a male crab’s sperm inside them and use it over and over again throughout their life span to reproduce. For this reason, some fishery jurisdictions encourage fishermen to throw females in their catch back, and keep the males, deeming the females more important for population support. The problem with this approach, some say, is that now there are not enough males to spread their sperm around adequately, which means that any given female may not get enough sperm from a male who has to share his sperm around too broadly. [6]Minogue, Kristen. With too few males, blue crab population may be put at risk. Smithsonian Insider. 21 July 2014. Accessed August 2018 at https://insider.si.edu/2014/07/ males-blue-crab-population-may-dive/

Boyce Rensberger, writing for the Washington Post in 1996, eloquently described the mating process:

“Most experts think that a female mates only once, during the few hours after shedding her last adolescent shell and before hardening of a new adult shell underneath. At no other time is the act physically possible. To ensure that male and female share those moments, females seek mates a few days before the shedding…. If the female likes what she sees, she …. turns and backs under the jimmy, and he embraces her. He stands over her, using some of his crawling legs to lift her up and cradle her below his body. For days, the jimmy, will “cradle-carry” his mate, which watermen call his “wife,” waiting for the crucial moment… When she is ready to shed and become an adult female, or “sook,” the jimmy releases her and backs away a little, giving her room to undergo the arduous process of splitting open her old shell and dragging her soft body out of it… The male’s protection, somehow overriding his normally cannibalistic nature, ensures not only her survival but also survival of his progeny… When the crab wife has crawled from her old shell, the male gently helps her to turn upside down and positions himself over her, belly to belly… For the next five to 12 hours, the jimmy and his wife remain coupled as he pumps a slow stream of sperm into two genital pores under her apron. Instead of allowing the sperm to fertilize eggs in her ovary immediately, she stores the male sex cells and will not use them until the following spring. When the male releases the female, she crawls away, never to see her mate again…” [7]Rensberger, Boyce. The Blue Crab’s Life and Death. Washington, DC: The Washington Post. 14 August 1996. 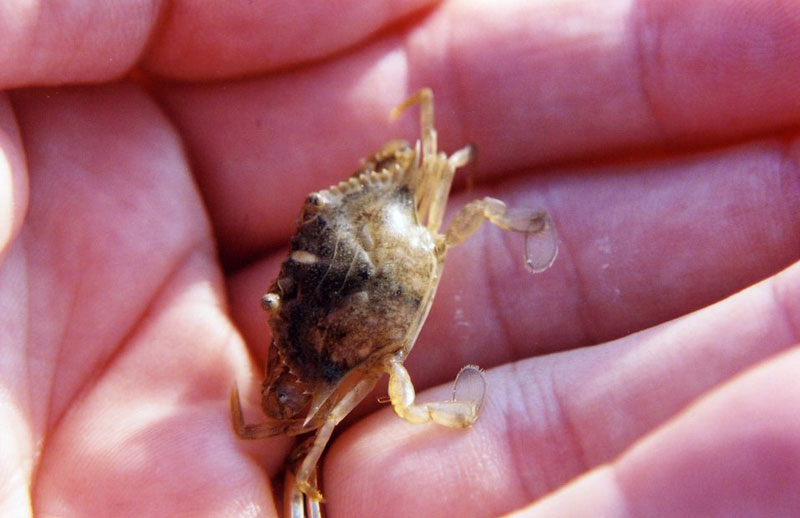 The process of “extracting” the meat yourself off a whole crab is called picking.

The Florida Sea Grant College Program at the University of Florida gives this consumer advice:

“Blue crabs in seafood markets usually are sold by the dozen. An average blue crab weighs about ⅓ pound with the edible portion quite low. An experienced crab picker can produce about 2 ¼ ounces of meat from each pound of live blue crabs. This is about a 14 percent yield. The actual yield depends on the size of the individual crab and experience of the crab picker.” [8]Sweat, Don E. Fish Facts for Florida Consumers: Blue Crab. SGEF-120. September 2003; updated May 2005.

They estimate that a dozen crabs will weigh about 4 pounds (roughly 2 kg) , and yield only about ½ pound (roughly 250 g) of edible meat (and they point out that that is optimistic, based on someone experienced at getting meat off a crab.) When you are looking at buying blue crab whole, or prepared, they advise to compare the cost of that actual yield per pound, versus the cost of buying the same per pound already prepared. They conclude that “the consumer is probably better off to purchase the crab meat already prepared unless the picking is incorporated into a ‘crab boil’ or ‘picnic type’ activity.” [9]Sweat, Don E. Fish Facts for Florida Consumers: Blue Crab.

Tinned and frozen blue crab can be bought year round. In North America at least, fresh may be easier to find in the winter months. 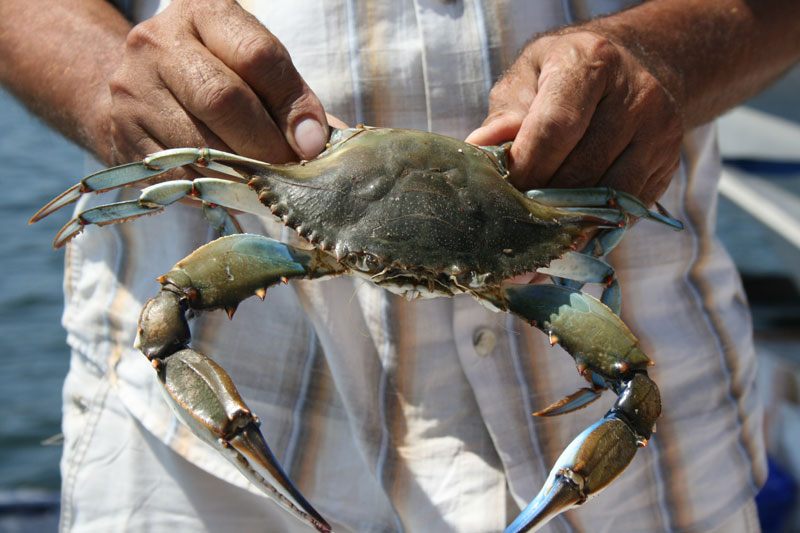 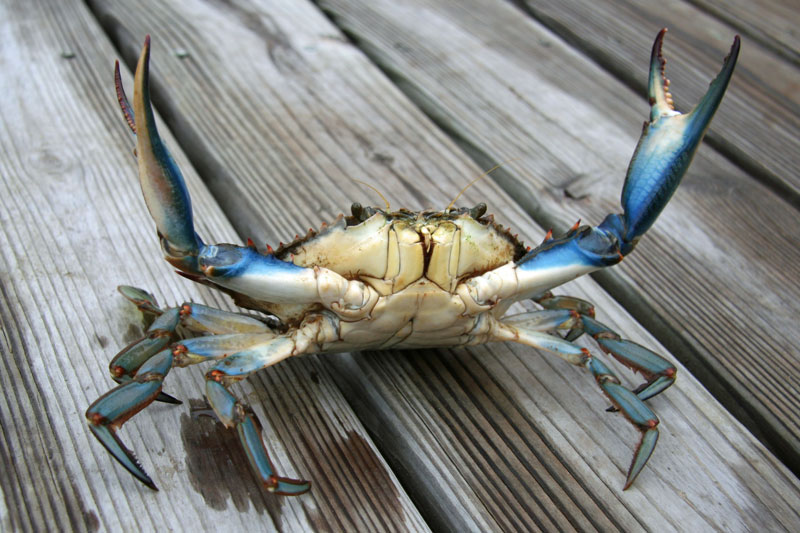