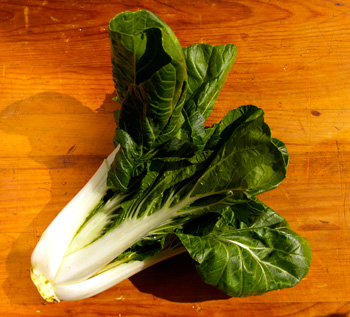 Bok Choy has roundish, dark green leaves that look like crinkled spinach, and crunchy, white stalks. When cooked, it has a sweet flavour and its stalks are firm.

It is a member of cabbage family. There are several sub-varieties of Bok Choy. “Regular” Bok Choy has white or greenish white stalks. It is normally 8 to 10 inches tall (25 cm), but can grow up to 20 inches (50 cm.)

Bok Choy is mainly used in Asian cooking, though it is starting slowly to make the “fusion” crossover into Western cooking. It hasn’t yet acquired a Westernized name, so the anglicized version of the Chinese name is still used.

Baby Bok Choy is just a younger version of Bok Choy, harvested when it is about 6 inches tall (15 cm.) Its flavour is sweeter and milder than full-sized Bok Choy. The stalks are white.

Baby Bok Choy is so tender that you can cook it whole or in halves to serve as a side dish (often served in oyster sauce.)

Trim and discard the base and any bad leaves;

You can cook Bok Choy, or use it raw in a salad. Cook almost as you would a cabbage — you can steam, boil, fry, microwave, stir-fry or sauté it, either by itself or with other items.

As a rule of them, if you are cooking Bok Choy with the stalks, they will take about 2 to 3 minutes to cook, but the leaves alone will take just 30 seconds.

Baby Bok Choy is usually served whole or cut into half at the most.

You can use finely shredded — and cheaper — Cabbage instead. Or try Spinach.

1/2 cup (55 g) contains 10 calories, a good calcium source and is high in Vitamins C and A. Contains no fat or cholesterol and is low in sodium.

Store unwashed in refrigerator in plastic bag for up to three to four days.

Bok Choy has been grown in the Orient for centuries. Although introduced into Europe in the 1800s, it only began making its way into everyday Western supermarkets in the 1980s to 1990s.