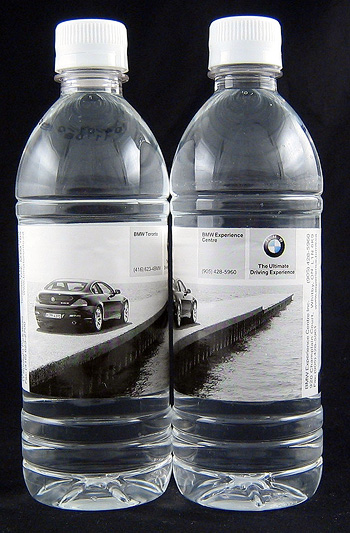 Bottled water is not just water sold in bottles: the term can also be used to describe water sold in cans, tetra boxes and plastic bags. Otherwise, it may come in individual portion or table sized glass bottles, or plastic bottles, or water dispenser-sized plastic carboys.

Drinking bottled water was initially seen as a status symbol in North America.

Much of the bottled water on the market is actually drawn from municipal sources, even if it has pictures of mountains on it. In the first quarter of 2004, it became public knowledge that Dasani (owned by Coca Cola) in the UK bottled water drew its water from the public water supply system in Kent, England. At this time, a 500ml bottle of Dasani was selling for 95 pence, at a time when the cost to the consumer of the same amount of tap water would have been .03 pence.

If the bottled water is tap water, the FDA says it must be labelled “from a municipal source”, though that can be dropped and it can be labelled “distilled” or “purified” instead if it has gone through those processes.

There is no universally accepted international certification for bottled water. In America, tap water is governed by the Environmental Protection Agency (EPA), whereas bottled water is governed by the Food and Drug Administration (FDA.) Nationally, the Food and Drug Administration regulates labelling, and some testing, but bottled water regulations may vary from one state to another in the USA. In Kentucky, for instance, bottled water producers face the same legislation as do those involved in supplying public tap water, though the rules don’t affect water bottled outside the state and sold in Kentucky.

Tap water in many locales held to more stringent standards than is bottled water. Bottled water does not have to be disinfected, filtered or have a protected source.

Some bottles of water have an expiration date on them, which puzzles people. This is because over time, the water may start absorbing chemicals from the plastic, causing the taste to go off. As well, the water is generally not sterilized before packaging, so overtime, any trace bacteria in the water could multiply and taint the water. The expiry dates are not required by the FDA; they are put there at the discretion of the bottler. The FDA says it considers bottled water to have an “indefinite safety shelf life if it is produced in accordance with CGMP and quality standard regulations and is stored in an unopened, properly sealed container.” [1]

One of the ironies of bottled water in North America is perhaps that throughout Canada and America, the standards of the tap water are second to none in the world. Some North Americans that do buy it say it’s because don’t like the taste of their local tap water, or the smell of it owing to chlorine, though both issues are often rectified by passing the water through a charcoal filter such as a Brita. Some people who live in areas where their tap water has a bad smell to it install something called a “reverse osmosis filter.”

Some also buy it because they think it is purer than their tap water, but then choose kinds which are chemically flavoured.

Another irony about bottled water in affluent North America, awash with safe tap water, is that the people who might most benefit from having safe drinking water are over in the developing world, and can’t afford it.

Wags have also noted the mountains of discarded plastic water bottles left behind after street marches by environmentalist activists.

Yet another irony about Bottled Water in North America is that it may be turning out to be less healthy than tap water. In parts of North America, where water has been fluoridated for ages, tooth decay was dramatically lowered. Dentists were puzzled to find it rising dramatically again, until they realized that it was because people were abandoning tap water, and drinking bottled water — which is not fluoridated. They have begun urging parents not to give their children bottled water.

Some say it’s not safe to keep refilling the water bottles, because they can’t be effectively sterilized and bacteria can build up in them.

Store at room temperature, or refrigerate, out of direct sunlight, and away from chemicals.