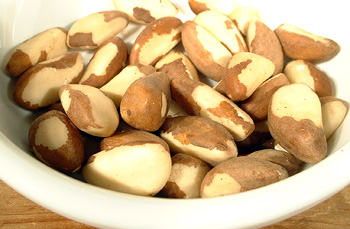 Brazil Nut trees are grown in Peru and Bolivia as well as in Brazil. The trees grow up to 165 feet tall (50 metres.)

Attempts at growing the trees in plantations have so far failed to produce Nuts. Only a certain type of bee, called Euglossine bees, can really pollinate them. These bees are large enough to force open a small hood over the nectar in the blossoms. Unfortunately, these bees tend to be non-social ones, that don’t lend themselves well to being kept in hives which are used to fertilize other types of orchards. The bees won’t live near the trees, because the trees only flower, of course, for a small period each year, and there is nothing of interest to them amongst the Brazil Nut tree groves the rest of the year. Progress is being made by planting other types of flowering plants around and in between the Brazil Nut trees to keep the bees in the general area year round.

After pollination, the tough, hard-shelled fruit pods, called “castaña pods”, can take up to 15 months to develop. The size of the pods ranges from that of a grapefruit to that of a coconut, weighing up to 5 pounds (2 kg.) Botanically, the pod is the fruit of the tree. Inside it is a cluster of 10 to 25 seeds that we call “Brazil Nuts.” Each nut comes in its own 3-sided shell.

Because growing the trees in plantations is still at a very tentative stage, most Brazil Nuts are still harvested from the wild. Harvesting happens by waiting for the pods to fall from the trees. No harvesting is done while the pods are still falling, because their size combined with the height they are falling make them very dangerous objects. Harvesters, in fact, wait a few months until they are all finished falling before collecting them from the ground.

The pods are relatively safe waiting on the ground for their harvesters. Only one animal, a rodent, called an “agouti”, has teeth strong enough to crack open the pods. In fact, the tree relies on that animal to disperse the seeds. Once out of the pod and hidden somewhere by the agouti (and forgotten by the agouti), the nut shell can take a year to open up on its own finally allowing the actual nut (or “seed”) inside to sprout and grow.

As of July 2003, Brazil Nuts in the shell have been very hard to find in the UK. The reason is that certain moulds, called Aspergillus flavus and Aspergillus parasiticus, may develop in the shipments of the nuts (the moulds can also develop on peanuts and sweet corn.) The moulds produce a toxin called “aflatoxin”, and in 2003 the European Union decreased the amount of “aflatoxin” that they considered safe. In order to be sold in their shell, the nuts must be tested to meet the new EU standards, and the supermarkets can’t meet the cost of the testing and still sell the nuts on at a price that they think consumers will still be able to afford. You can still buy shelled Brazil Nuts in the UK, as the costing of testing shelled nuts is minimal.

Though Brazil Nuts are often eaten out of hand as part of a nut mix, they are also good to cook with.

To crack Brazil Nuts more easily:
a. Freeze for 6 hours before cracking OR;
b. Bake the nuts for 15 minutes on a baking sheet at 350 F (175 C) OR;
c. Place in cold water in a pot, bring to a boil and boil 3 minutes, drain, and then pour on very cold water and let stand 2 minutes. Drain and crack.

The oven method has the advantage of developing the flavour. Whichever method you use, you will still need a serious nutcracker, or a hammer or a mallet to crack them open.

“Remember away back about 1941 when you could buy toasted, salted Brazil nut chips and ‘eat yourself sick?’ Mrs. Jerome M. Ziegler, the maker, reports she has located enough of a supply to provide the chips in limited amounts for another month or longer. But they’re made only on order—telephone Regent 7-0293. Pick up your purchase at the kitchen door, 61 East Sixty-fourth Street. The nuts are thinly sliced, the shavings roasted in butter and salt, and worth their salt, even at the price of $3 a pound.” — Paddleford, Clementine (1898 – 1967). Food Flashes Column. Gourmet Magazine. February 1944.

This web site generates income from affiliated links and ads at no cost to you to fund continued research · Information on this site is Copyright © 2022· Feel free to cite correctly, but copying whole pages for your website is content theft and will be DCMA'd.
Tagged With: Latin American Food