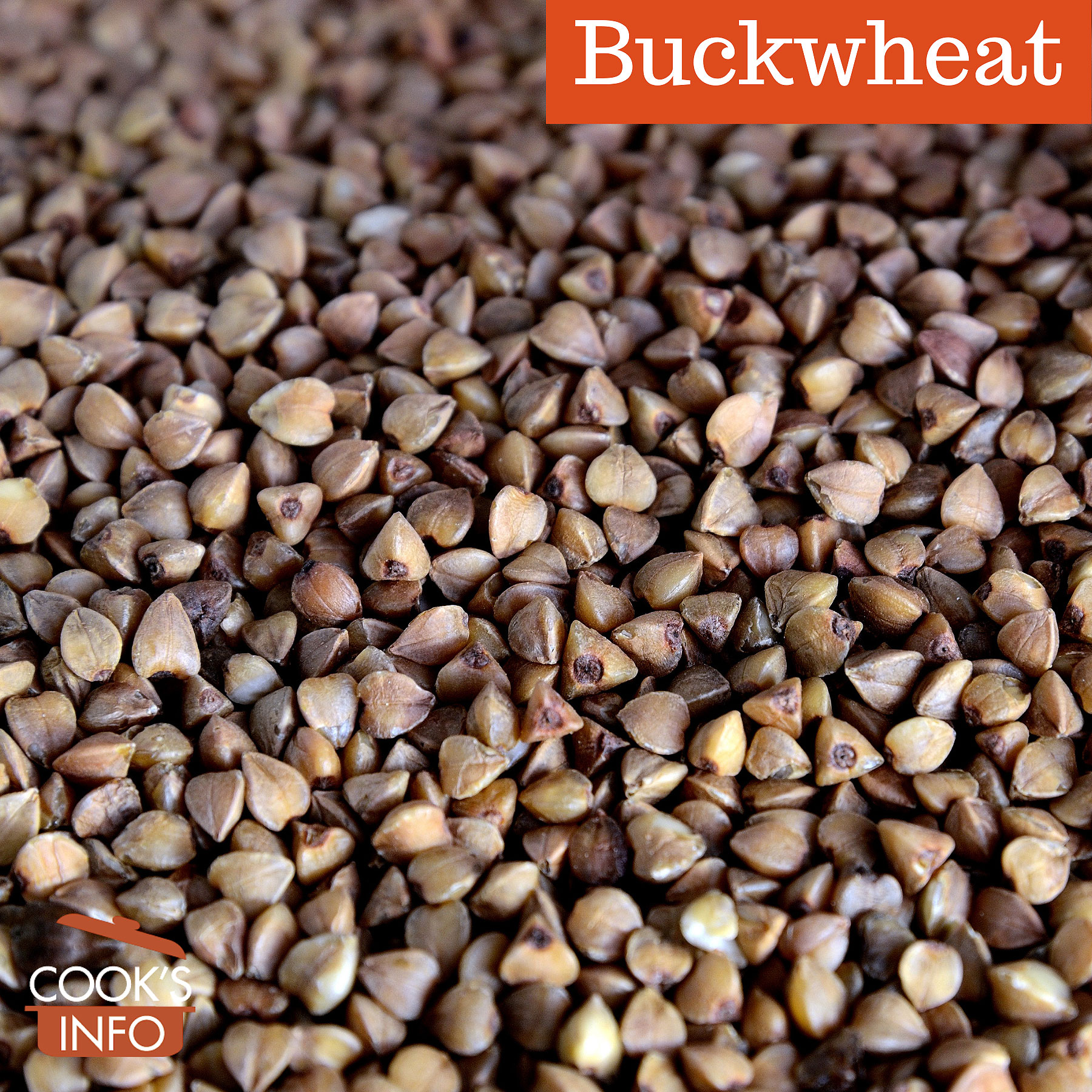 Buckwheat is a seed that is treated in culinary terms as a grain.

The seeds look like teeny small black triangles. They are very small — 16 would fit in a spot the size of a thumbnail. The black on the outside of the seed is the hull.

They have a nutty, earthy flavour.

The plant is actually an herb related to sorrel and rhubarb — and it is not related to the cereal family at all. The plant’s leaves are heart-shaped, and the flowers will be either white or yellow-white. 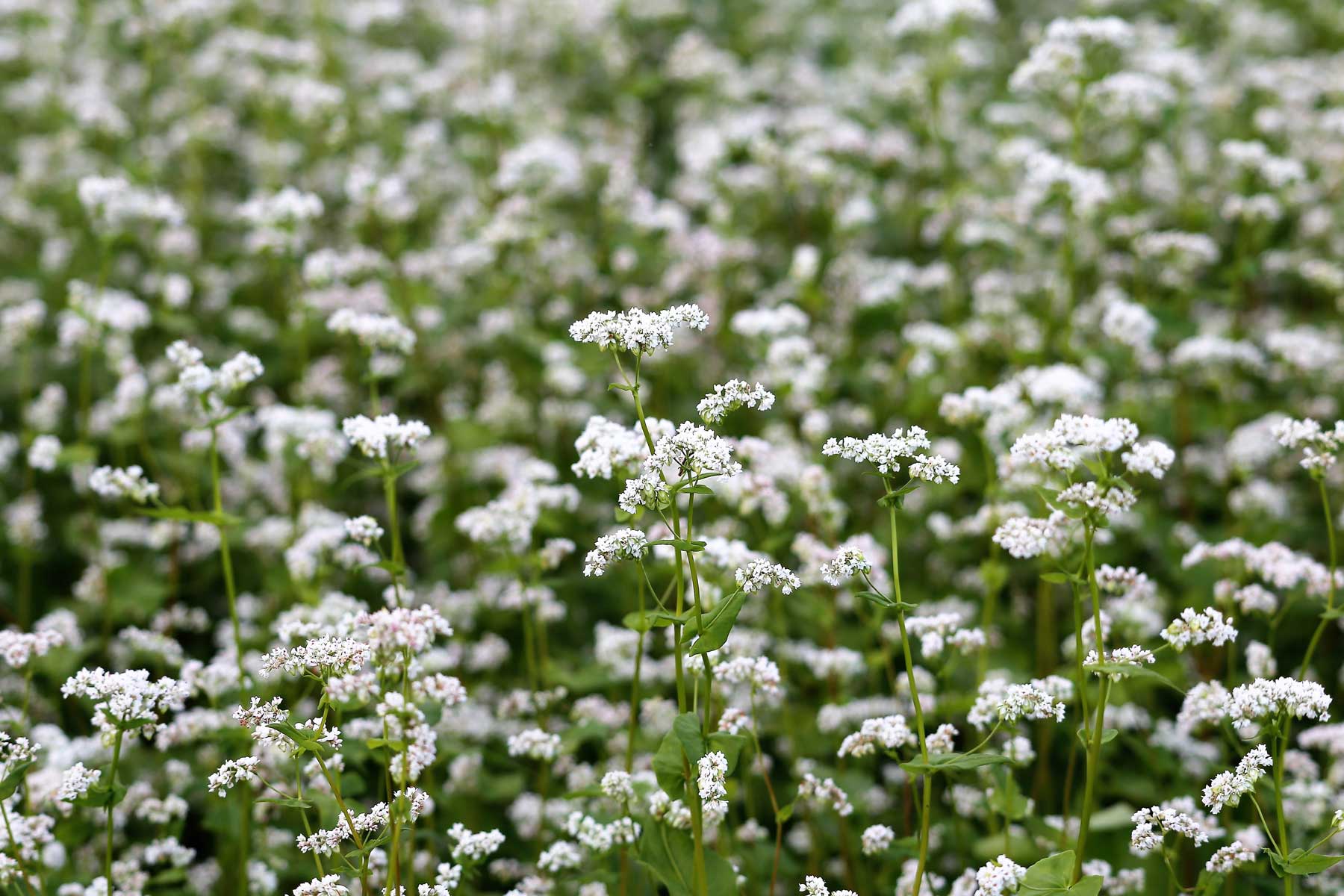 The top buckwheat-consuming regions in the world are Eastern Europe (particularly Russia, the Ukraine and Belarus), and China.

In Eastern Europe, buckwheat kernels get crushed and cooked up as side or breakfast dishes.

Buckwheat hulls, a by-product of the milling process, are popular as a filling for pillows in Japan and with people who have allergies to dust or feathers.

Buckwheat has a lot going for it nutritionally (see Nutrition section below), but many people regard having a taste for it as something that is best acquired young as a child.

“Buckwheat products tend to be quite bitter in taste and have a specific aroma which might be disliked by children. The bitter taste of buckwheat might be mainly due to high content of polyphenols and tannins whereas volatile compounds such as alcohols, ketones, aldehydes and pyrazines are responsible for this characteristic aroma. But scientists are also working on buckwheat plant with lower bitter active compounds to encourage consumers to consume buckwheat.” [1]Starowicz, Malgorzata. Polish Academy of Sciences. In: Superfoods: Myths and Truths. Gluten-free diets. Module 2.9. September 2020. Accessed September 2020 at https://www.futurelearn.com/courses/superfoods-myths-and-truths/4/steps/796821

“Buckwheat is a source of proteins, micro and macro elements, vitamins from group B, flavonoids and also D-chiro-inositol. D-chiro-inositol is responsible for increasing cell sensitivity to insulin and therefore, it can influence lowering the sugar content in our blood. Because of that buckwheat is recommended for people with diabetes type 2. Buckwheat has a very low glycemic index which simply means that it makes you full quicker and the state will last for longer. These properties might help prevent being overweight… buckwheat contains a lot of flavonoid compounds but rutin is the top flavonoid in buckwheat. Rutin might reduce oxidative stress, the level of bad cholesterol and increase the strength of our immune system. Also, it can reduce risk of cardiovascular diseases.” [2]Starowicz, Malgorzata. Polish Academy of Sciences. In: Superfoods: Myths and Truths. Gluten-free diets.

Another characteristic of buckwheat that is useful to some is that it is gluten-free: [3]”Buckwheat is one of the most valuable pseudo-cereals in terms of its nutritional composition, and it is suitable for celiac patients because of its gluten-free characteristic.” Altındağ, Gülçin et al. “Quality characteristics of gluten-free cookies made of buckwheat, corn, and rice flour with/without transglutaminase.” Food science and technology international = Ciencia y tecnologia de los alimentos internacional vol. 21,3 (2015): 213-20. doi:10.1177/1082013214525428

“On top of that buckwheat doesn’t contain gluten so it’s widely used as a substitute for wheat and it’s added to the formulation of gluten-free products made for people with celiac disease and gluten intolerance.” [4][ref]Starowicz, Malgorzata. Polish Academy of Sciences. In: Superfoods: Myths and Truths. Gluten-free diets.

Buckwheat has a lower glycemic index than wheat. [5] University of Sydney. Glycemic index database. Accessed September 2020 at http://www.glycemicindex.com/index.php This helps contribute to a sense of feeling full after eating it that lasts longer.

In warm climates or weather, buckwheat products should be stored in a cool spot, ideally a refrigerator or freezer, to prevent the high protein content in it from going rancid.

Buckwheat appears to have originated in Central Asia and spread throughout the Far East.  Soba noodles were considered peasant food and avoided by the Japanese upper-classes until the 1800s.

Buckwheat arrived in Europe by the Middle Ages — some say brought back by the crusaders. While it was not an ideal crop — less gluten for making good bread — it grew so rapidly in fields where little else would grow that weeds didn’t have time to cause problems. The Dutch brought it to New York State with them, planting it along the Hudson River.

When found growing wild in North America or Europe these days, it is often actually not wild but patches of cultivated buckwheat allowed to grow as food and hiding places for game birds such as pheasants. Or, it is being grown for bees to meander in, as buckwheat nectar gives a wonderful flavour to honey. 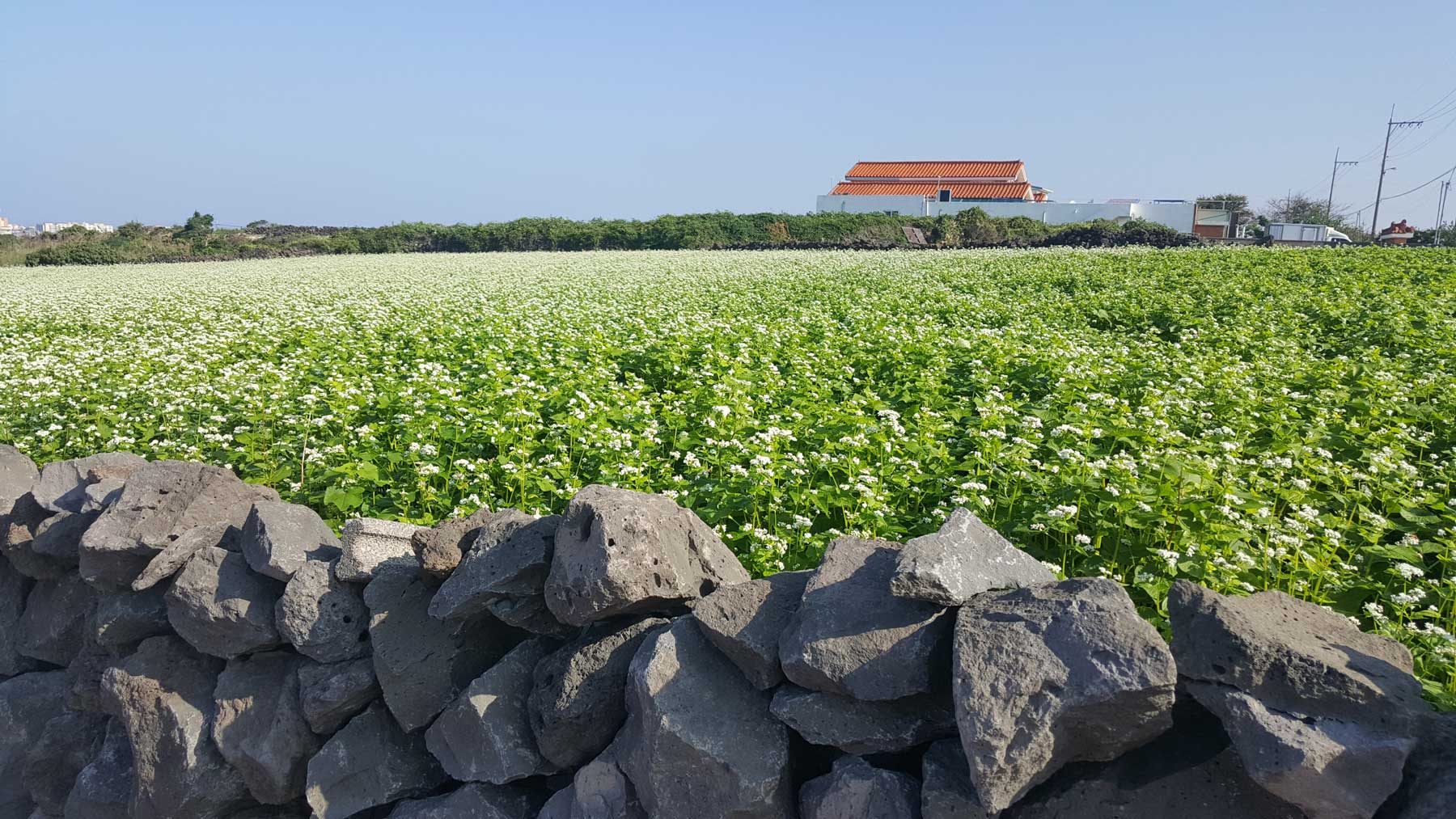 The Dutch called buckwheat “boek-weit” (“boek” meaning “beech tree” and “weit” meaning wheat), because its three-sided seeds resembled beech nuts. They introduced it to America as “boek-weit”, which became “buckwheat” in English.