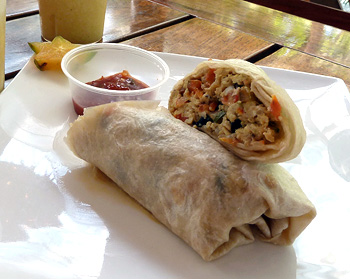 A Burrito is a taco made with a flour tortilla, instead of a corn one. They are made with large flour tortillas, so they are more of what fast-food places are now calling a “wrap.” Tacos are, instead, made with a corn tortilla that is only folded once.

The dish is most prevalent in the regions of Sonora and Durago in Northern Mexico, where flour tortillas are made and used.

Burritos have only been made since the Europeans introduced wheat . Some say the Mennonites who settled in Northern Mexico accelerated the use of flour tortillas, but that seems unlikely, given how much Mennonites tend keep to themselves (not to mention that they’re more likely to make a potato dumpling than anything with a tortilla.)

Some people now make it a point of Mexican cuisine purity to use only corn tortillas and therefore only make “tacos.” To help them extend their search for authentic tacos, included in the entry on Tacos is information on some of the authentic bug fillings that they may wish to try.

In any event, Burritos are becoming more popular in more southerly parts of Mexico. They have been very common in the Southern US for some time. As Mexicans go back and forth across the border, they have started looking for Burritos at home. At some places even in Mexico City now, you will be asked if you want your taco with a flour or with a corn tortilla.

For more information on the Mennonites in Northern Mexico, see the entry on Chihuahua Cheese.