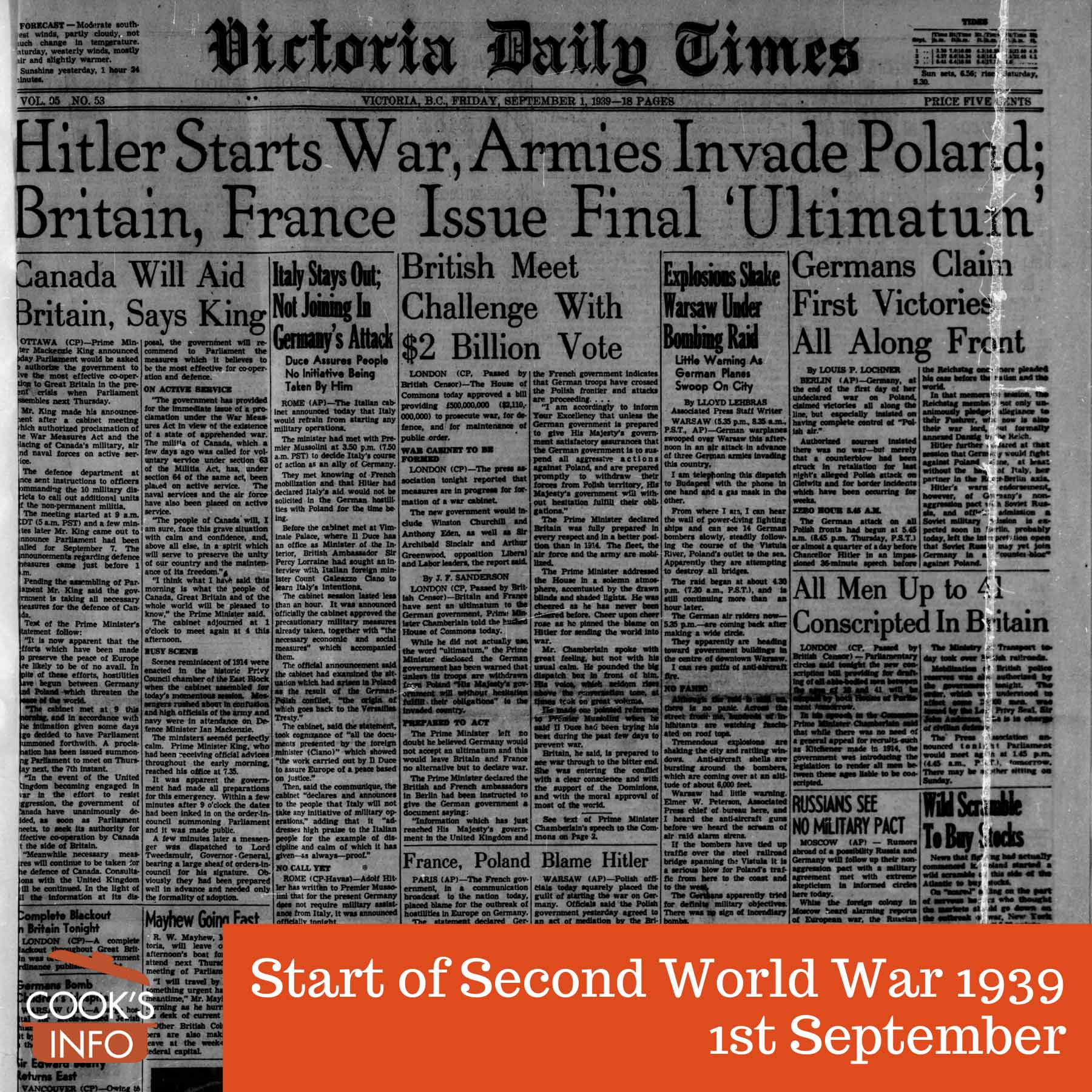 On the 1st of September, in 1939, the Second World War started with the Nazi Germany invasion of Poland.

It would be a war in which food played a deciding role. In fact, some have said it could be argued that home economists played a starring role in winning the war.

Armies have always “marched on their stomachs”, typically stealing food from the inhabitants of those whose lands they were marching through. And in order to better feed Napoleon’s armies, food scientists came up with margarine, and the process of canning food. But the focus was always on feeding the troops.

The Nazis, however, completed the transition of war from being one of army vs army, to one of waging total war which included civilian populations as well.

A key part of their strategy was to starve the civilian population of the island fortress of the United Kingdom to its knees, so that the people would press their leaders to withdraw from the war.

The Brits, however, as early as the first half of the 1930s had already began marshalling food scientists and home economists to plan for wartime food and nutrition, so that when war did break out, they would be ready to feed their population for the long-haul. The plans including printed rationing books that were ready to issue from day one. Many of the thinkers behind the food planning being done in England were Jewish food scientists and dietitians that the Nazis had driven out, a strategic mistake that would cost them dearly in the second half of the war.

Elsewhere in what was known as the senior British Commonwealth, in countries such as Australia, Canada, New Zealand and South Africa, rationing was not strictly necessary. Those countries had all the food they needed in order to feed their civilian population and troops with no restrictions. But, they implemented rationing regardless in order to free up food to feed the civilians and troops of the United Kingdom. It was in a way the mirror image of British wartime rationing: in Britain, the rationing was to deal with shortages. In the Senior Commonwealth, the goal of the rationing was to create surpluses.

The Nazis made a concerted effort in the first half of the war to disrupt this food supply, as it interfered with their plans to starve the Brits out, but ultimately were unsuccessful owing to the sheer overwhelming volume of food that the Commonwealth through rationing was able to free up and ship to the UK, and owing to the tremendous sacrifices made by the Merchant Marines of those countries in getting that food there.

The war caused many long-lasting food changes, too.

In North America, fats were rationed to free them up for use in munitions, which gave vegetable oils — and margarines — their break-through chance to shine in the sun. Canadians and Americans developed a permanent aversion to mutton, which was unrationed, and by extension, a phobia of even milder-tasting lamb. Peanut butter took off, as it was an unrationed item to spread on bread, and an unrationed source of protein, to boot. And, serendipitously, peanut butter was included in U.S. troop rations along with portions of jelly, which many believe gave rise to one of the U.S.’s favourite sandwiches, peanut butter and jelly. Pressure cookers, whose production was restricted during the war to free up metals for the military, were made cheaply and rapidly in the States after the war to meet pent-up post-war demand, but they exploded like bombs with dramatic effect in kitchens across the country, causing Americans to avoid pressure cookers for the next 50 years while the rest of the world embraced them. War time food planning also caused the United States government to invest heavily in research-based recommendations for safe home canning, an investment which continues to pay dividends today.

Food wise, different countries experienced the Second World War differently. Russians starved in great numbers as the Nazis razed their crop lands. People in the Netherlands and Belgium, typically good planners, were unable to do much as the Nazis stole most of their food production to make up for the lack of planning that had been done in Germany. New Zealanders, Canadians and Americans learned to home can fruit in the fall without added sugar. And the German people suffered and starved terribly. For all their much-vaunted organizational mania, the Nazis had made the fatal mistake of thinking only militarily, planning only for lighting-fast “Blitzkrieg” wars, and completely forgetting to plan for feeding their own civilians. Many Germans consequently became walking skeletons, reduced to trying to digest bread made with half sawdust in order to have the energy to keep up the military production work the Nazi overlords demanded of them.

And, paradoxically, Brits emerged from the Second World War more healthy food-wise than they had ever been in history, or since.

There’s currently a mania of too much arm-chair dwelling on the old challenges of the Second World War, while ignoring the world’s new challenges of sustainability and mal-nutrition that now demand actual effort from us. Still, there are many food lessons to be learned from the war. If nothing else, on a casual basis, war time cookbooks can be a source of very healthy recipes, as the recipe writers had to work with restricted quantities of items such as fats, salt and refined free sugars — items which today’s dieticians want us to restrict, anyway.

It is a continuing goal of CooksInfo to explore the Second World War food situation in various diverse countries. Here are a few pieces towards that effort:

Shit on a shingle

This web site generates income from affiliated links and ads at no cost to you to fund continued research · Information on this site is Copyright © 2022· Feel free to cite correctly, but copying whole pages for your website is content theft and will be DCMA'd.
Tagged With: Second World War