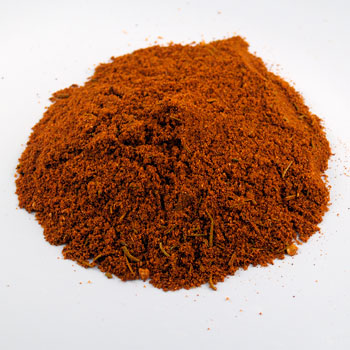 What’s in it, and in what proportions, will depend on the brand, or if you’re mixed it up yourself, the recipe.

Though thought of as “spicy”, the hottest ingredient in it tends to be just cayenne pepper or chili powder.

Below are the results of a survey [1] CooksInfo.com did of ingredients used in 10 random recipes to be found in books and on the Internet, including two used by commercial blends, all purporting to be “Cajun Spice Mix.”

The results are listed in order of how many recipes called for a particular ingredient. They show that really the only common ingredients are cayenne pepper, black pepper and paprika. This would be what gives all the various mixes their common reddish colour. 90% of recipes also call for garlic powder and onion powder; 80% also called for salt.

The majority of mixes contain salt, so you will want to reduce or eliminate salt elsewhere in the dish to avoid oversalting.

Recipes usually assume that you want to mix up enough to store it and have it on hand.

[1] The survey was completely random; just “as found.”

Based on the survey above, this mixture seems to contain the ingredients that were called for 50% of the time or more:

Store homemade mixes at room temperature in an airtight container or sealed jar in a dark place; use up within 3 months.

This web site generates income from affiliated links and ads at no cost to you to fund continued research · Information on this site is Copyright © 2022· Feel free to cite correctly, but copying whole pages for your website is content theft and will be DCMA'd.
Tagged With: Cajun Food