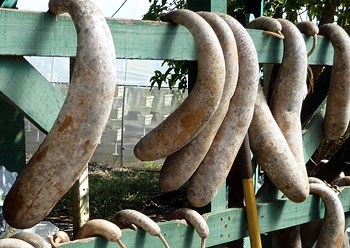 Calabaza is a squash grown in the Caribbean and in Latin America.

There so many different sizes, shapes, and colours of Calabaza that it’s almost better to treat the word as a generic category, like “apple”, or as a collection of squash varieties. Part of this is because like all squashes, Calabaza is quite promiscuous. And even if it weren’t, it doesn’t always grow true to seed.

Calabaza is often round, but not necessarily; it can be oblong like butternut squash, or gourd-shaped, or watermelon shaped.

The skin can be beige, green or orange. Named varieties such as ““La Estrella” and “El Dorado” are pumpkin-shaped, with green skin.

The size varies; anything from acorn squash size, up to 50 pounds (22 kg.)

Most will have firm, bright orange flesh inside, though some varieties will have yellow flesh. The flesh is sweet, and the seeds are edible.

The plants have large leaves, and long vines, up to 50 feet (15 metres) long. They prefer warm, moist weather.

The plant’s yellow flowers can be used as an ingredient.

Choose Calabaza with no bruises, and that feel heavy for their size. The stem should still be attached to it.

Very large Calabaza may be sold sliced at the markets.

Calabaza can be used in any way that you would use squash or pumpkin.

At home, you can store uncut in a cool place for up to a month.

Wrap cut Calabaza in cling film and store in refrigerator for up to a week.

Cooked Calabaza can be frozen for up to a year.

This web site generates income from affiliated links and ads at no cost to you to fund continued research · Information on this site is Copyright © 2022· Feel free to cite correctly, but copying whole pages for your website is content theft and will be DCMA'd.
Tagged With: Squash