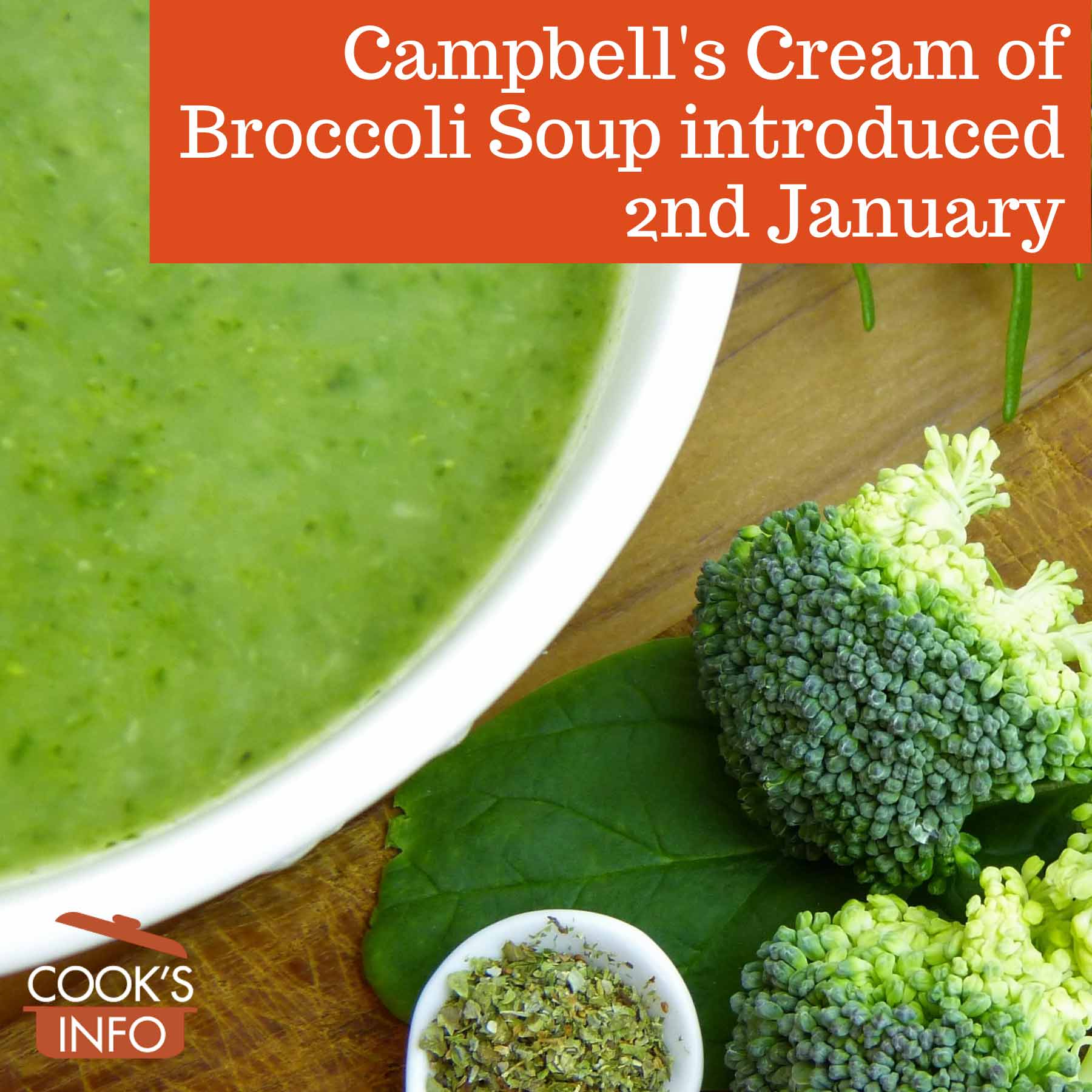 The 2nd of January is the anniversary of Campbell’s Cream of Broccoli Soup.

It became available for purchase for the first time on the first business day of 1990, which was January 2nd.

Now there are other variations, such as a low-fat version, and a broccoli and cheddar version.

On the 2nd of January 1990, Campbell’s Cream of Broccoli Soup started being offered for sale in very large cans from wholesale suppliers to the restaurant trade. 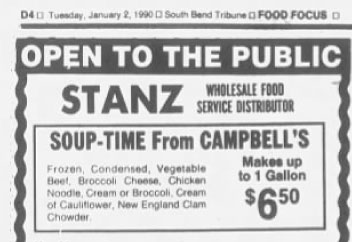 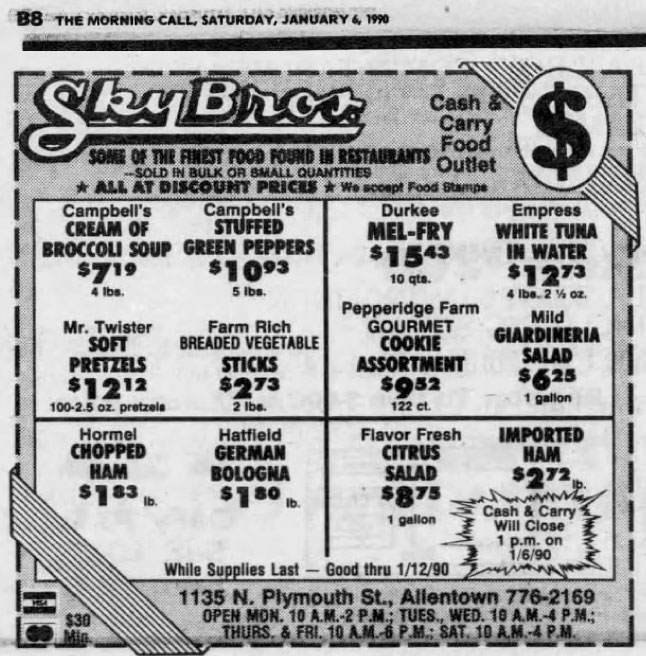 A few days later, by the 11th of January 1990, it was being offered to homes in a frozen format as part of a soup and sandwich microwaveable meal combo.

“Also new to the lunch line in grocery stores is Campbell Souper-Combo collection. Campbell is betting that three out of four households that have microwave ovens will buy into this 10-combination lunch line. The soup and sandwich pairs include the Baby Boomer comfort combo of tomato soup and grilled cheese sandwich, restaurant-influenced cream of broccoli soup with ham and cheese croissant sandwich…” [1]Fort Worth, Texas: Fort Worth Star-Telegram. Wednesday, 7th March 1990. Page 6-2, col. 6. 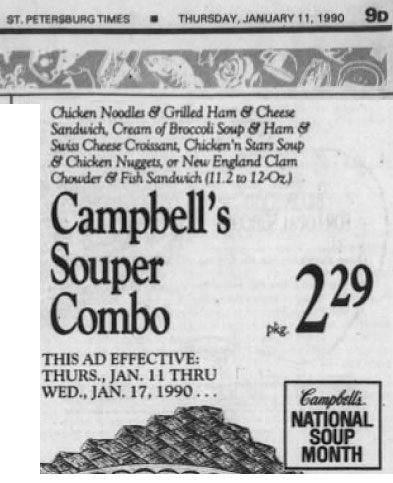 The frozen cream of broccoli was extremely popular with adults; less so with children, who called it “the swamp thing”:

“How well will the new microwaveable meals for kids go over with their target audience? To get an idea, we decided to put 28 varieties to the test… The only Souper-Combo that variety that got a strong negative response — and it’s an adult favorite, according to Campbell’s — was the cream of broccoli soup. Two tasters called the main ingredient “the swamp thing”. [2] Thwaite, Jean. Most meals easily pass the little taste-bud test. Atlanta, Georgia: the Atlanta Journal and Constitution. Thursday, 12 April 1990. Page W8, col. 1. 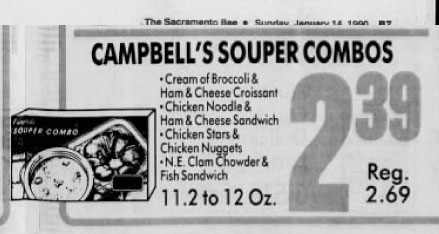 The first sale of household-size (10 oz.) cans that we have found advertised in print media archives is from 4 June 1990, Detroit, Michigan: 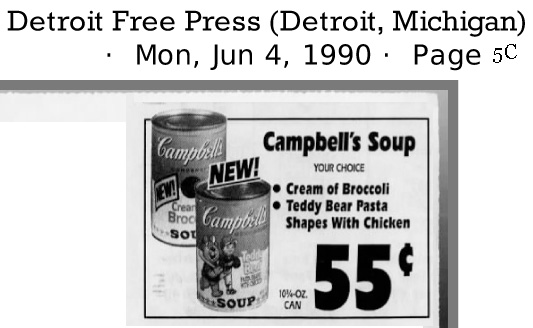 Note that there was a difference in marketing the two sizes of cans: to the restaurant trade, the large canned version was sold as a soup to be served to customers, in a bowl. To homes, the smaller 10-oz size was sold as a soup, certainly, but also as a recipe ingredient.

In the fall of 1990, the launch to homes campaign picked up steam, with the offer of a free recipe booklet.

In the fall of 1990, Campbell’s also ran a contest jointly with Woman’s Day magazine to promote the soup as an ingredient:

“Young and old cooks have until Feb 1, 1991 to try to change President Bush’s vote on one of his most well-known issues — broccoli — while also having the opportunity to win cash prizes totalling over $18,000.

That’s the deadline for entries in the recipe contest “How to get President Bush to Eat Broccoli” sponsored by Campbell Soup / Woman’s Day magazine. The winner will receive $7,500 cash for the best recipe made with Campbell’s Cream of Broccoli soup and the winning entry will be sent to the White House.

In the fall of 1991, the winner was announced. It was Priscilla Yee, an accountant from Concord, California, with her recipe for Broccoli Lemon Sauce for vegetables. [4]Winning recipe may change president’s vote on broccoli. The Times / Beaver Newspapers. Pennsylvania. 30 October 1991. Page C4, col 2. Her recipe appeared in the 24th September 1990 edition of Woman’s Day magazine.

“The winner in Campbell’s “How to Get President Bush to Eat Broccoli” recipe contest is a telephone company accountant with an MBA from the University of California at Berkeley. Priscilla Yee, who chose her house in Concord, Calif., because “the kitchen had 40 feet of counter space,” picked up $7,500 last week for submitting the best of more than 3,000 entries in the national contest. Ms. Yee also won a trip to Washington and a tour of the White House while the Bushes were vacationing. ” [5]Knight-Rider News Service. Broccoli fit for a president. Baltimore, Maryland: The Baltimore Sun. 18 September 1991. 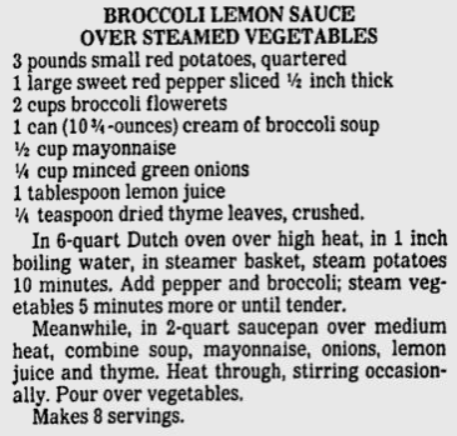 By the end of 1991, the household-sized cans of Campbell’s Cream of Broccoli soup had broken long-time records for sales:

“This soup is hot

Souped up: George Bush may not like it. But what does he know?

The most successful new product in 55 years for the Campbell Soup Co. is its cream of broccoli soup.

Since its launch during Campbell’s 1991 fiscal year, consumers have carted off 56 million cans. At one time this year, cream of broccoli was among the 25 best-selling grocery-store items of any kind.

Campbell has sold more cream of broccoli than one of its rivals has sold soup, Campbell crows.

The last time Campbell Soup had such a hot soup was 1934, when it introduced chicken noodle and cream of mushroom. Both are still the company’s No. 1-and No. 2-selling soups, respectively. But cream of broccoli is a steaming No. 7 in the traditional red-and-white-can line.

Yet, an even hotter soup may be September’s broccoli cheese. It’s selling just as well as cream of broccoli, and Campbell’s expects it to be another record-setting product.” [6]Gannett News Service. Soviet dolls, soup, ties hot in ’91. Lafayette, Indiana: Journal and Courier. Sunday, 29th December 1991. Page A19, col. 1. 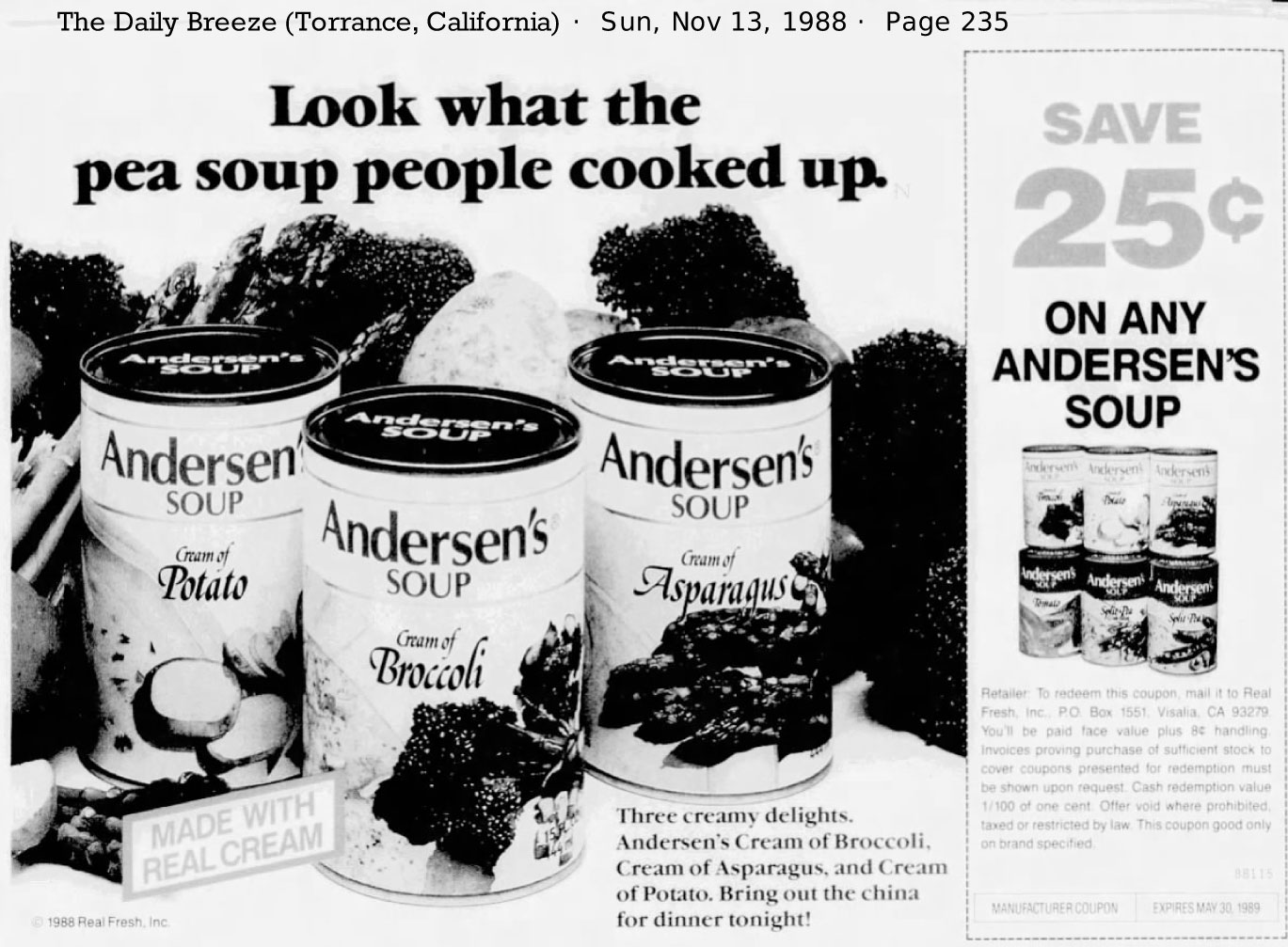 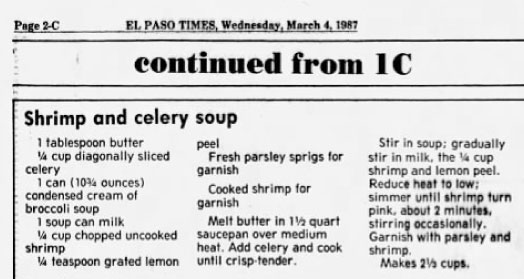 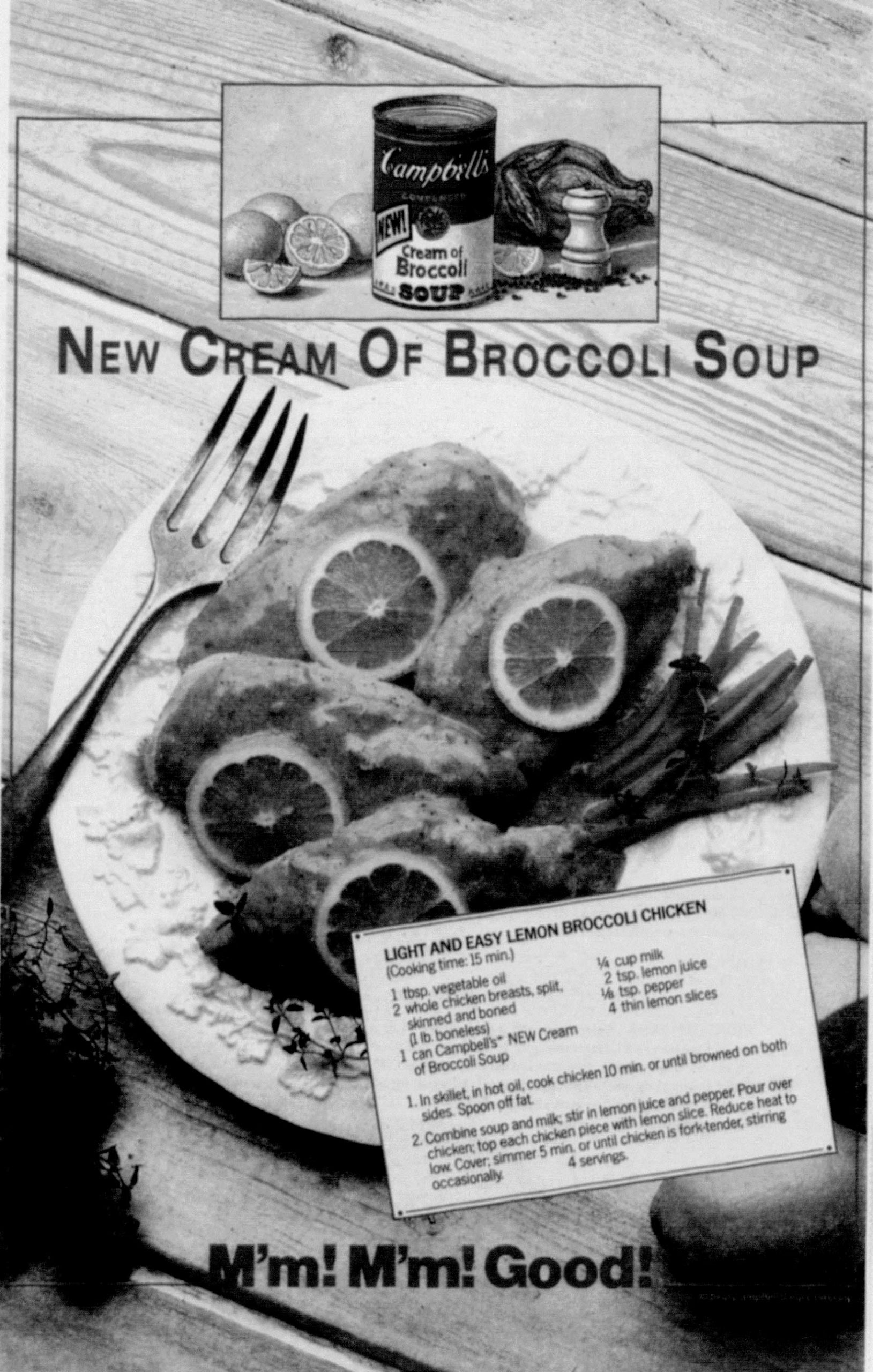 This web site generates income from affiliated links and ads at no cost to you to fund continued research · Information on this site is Copyright © 2023· Feel free to cite correctly, but copying whole pages for your website is content theft and will be DCMA'd.
Tagged With: Soups