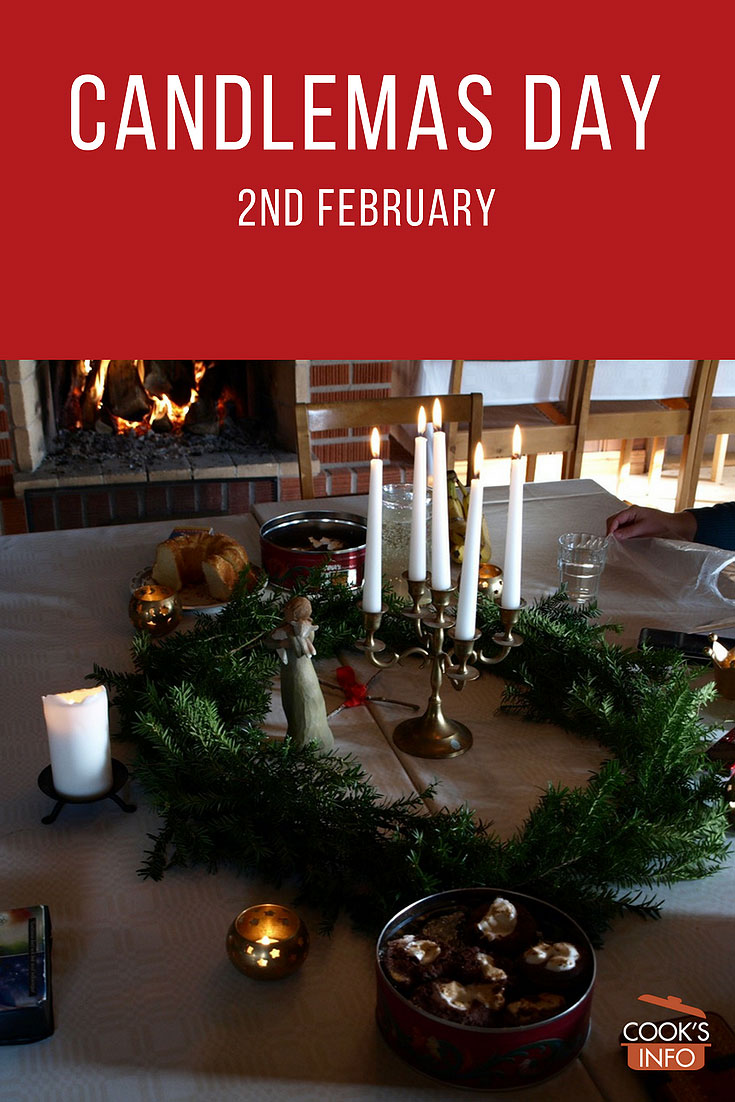 Candlemas originally marked the day in the Bible when Mary went into the temple in Jerusalem to be purified with her newborn son.

In France, crêpes are eaten, but only after 8 pm in the evening.

In Germany, pancakes were made as well. If you could toss a pancake and have it land perfectly back in the pan, it meant you wouldn’t be wanting for money that year. 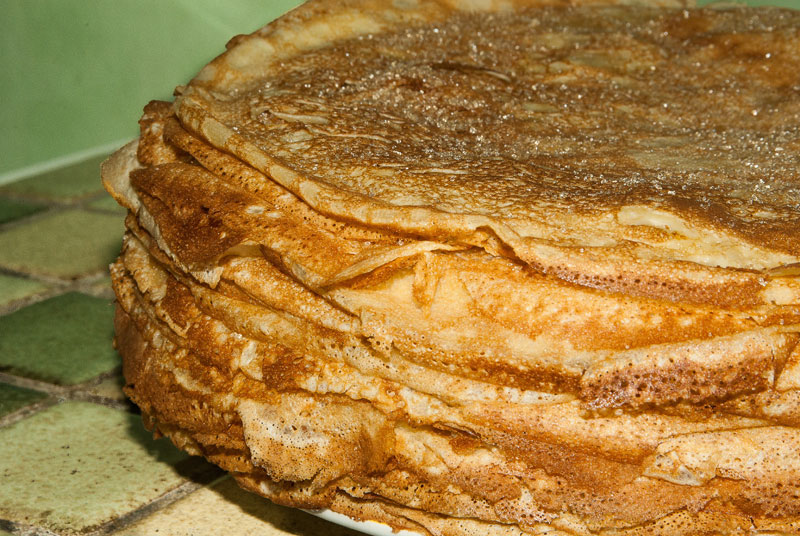 In Ireland, boxty is served.

In Scotland, a Candlemas King and Queen were designated in classes. These students had the power for the next six weeks to commute for someone any punishment that had been ordained by a teacher. In Newfoundland, a Candlemas King was chosen. It would be a single man, and he would visit the homes of single women wearing ribbons.

In Acadian tradition, a few days before Candlemas, someone would dress up in ribbons, and carry a long cane, and lead a group of people from house to house in search of food donations for the coming party. When you gave food, the group would perform a dance called the “Escaouette.” This going from house to house was called “running the Candlemas” (“courir la Chandeleur”.) On Candlemas Day, after the church celebration, in the evening, in a place such as a church or community hall, there would be a communal supper made with the donated food, then singing and dancing. The Candlemas supper and dance still continue, even if most people don’t make it to church earlier that day.

The Cajuns in America inherited the custom from their Acadian ancestors, but instead doing the food gathering at Mardi Gras to make a gumbo.

One superstition held that if you heard funeral bells on Candlemas day, someone you knew was going to die: each toll that you heard represented a day, so you could tell how close in the future this would be. It was also considered bad luck to start a sea voyage on this day.

Under Mosaic law, a woman was basically unclean for 7 + 33 days (i.e. 40 days) after child birth, and couldn’t go into the temple. From the 25th of December, today marks 40 days.

Other branches of Christianity were celebrating the day before the Church in Rome did, such as the Greeks, the Armenians and the Copts. Their names for it centre around Christ first coming to the Temple, thus one of the English synonyms for this day, “The Feast of the Presentation of Christ.”

The Roman Church only made this day more important later on, sometime in the 600s, but calling it instead “Purification of the Blessed Virgin Mary”, aka Purificatio B.M.V. in Latin. Thus, while the Eastern Church focussed more on Jesus, in the Western Church the emphasis was on Mary. In Christianity, it is now mostly only observed by the Anglican, Orthodox and Roman Catholic traditions.

Candles didn’t much enter into things under the 11th century. The annual supply of the Church’s candles would be blessed on this day. Beeswax candles are blessed by being sprinkled with water and having incense swung around them, and candles distributed to everyone in the church (now you have to bring your own beeswax candles to the church.) Then there’s a procession in which people carry lighted candles while the choir sings. The procession represents the entry of Jesus as light of the world into the temple. The procession used to also go out into the adjoining graveyards. People would then bring the candles home, and light them in their windows as a symbol of light at a very dark time of the year in the Northern Hemisphere.

The Nunc Dimittis, which was spoken by Simeon in the Bible, is sung on Candlemas:

Lord, now lettest thy servant depart in peace, according to thy word,
For mine eyes have seen thy salvation
Which thou hast prepared before the face of all people,
To be a light to lighten the Gentiles, and to be the glory of thy people Israel.