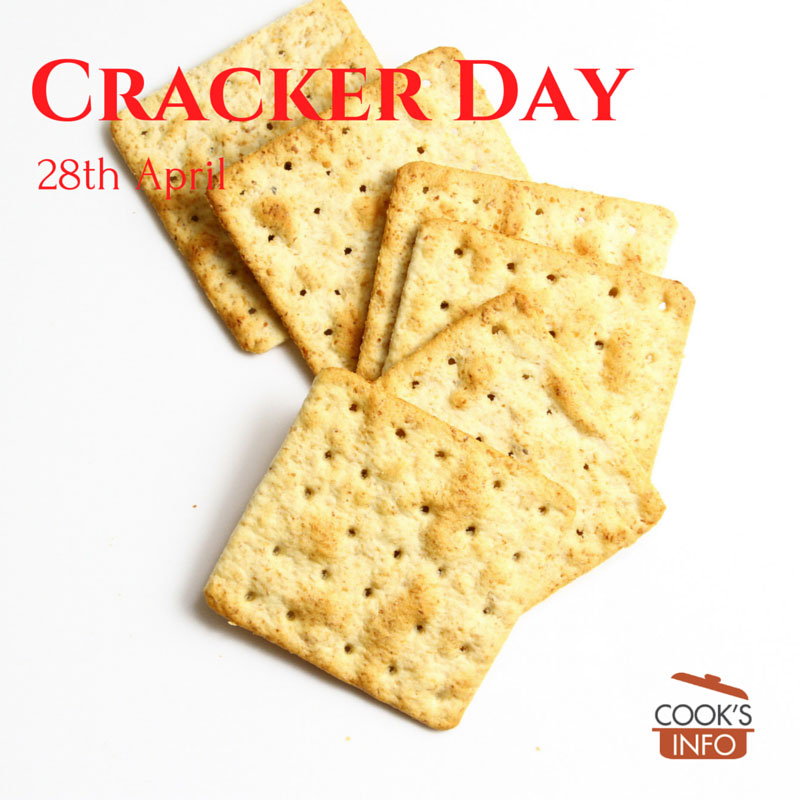 The 28th of April is Cracker Day.

The lowly, crunchy, savoury or taste-neutral biscuit that North Americans call “crackers” doesn’t often get much credit or attention. It has a very short life span on a plate, and it’s seen merely as a vehicle to shovel things onto, such as cheese or meat spreads. In fact, if it draws too much attention to itself, it’s because it’s a bad cracker. And, in many households, crackers often only get hauled out when company comes round.

So today, why not highlight crackers? Pick up a few boxes of ones that you have always wondered about, but not tried, plus maybe one of your old favourites. Get a few cheeses or meat spreads to go with them, and don’t forget the pickles. Lay out a big spread, maybe with a few salads or crudités, and make a supper of it all, taking time to actually savour the crackers.

Cracker Day has nothing to do with Passover (when the cracker-like bread called “matzo” is served.

And, it certainly has nothing to do with Florida or Georgia country crackers (hard to define, but roughly: self-reliant and independent country “hicks.” Some more valiantly sum it up as “cowboy heritage.”) In almost every month of the year, there’s a Cracker Day somewhere in Florida with “cracker activities”: bluegrass music, barbeques, quilting, crafts, storytelling, horse riding. Someone from Florida hearing of Cracker Day may well think of the back-country folks activity day. While there are different theories guessing as to why these people were called “crackers”, none of them sadly touch on crackers, as in the biscuit.

This is just speculation, but our Cracker Day may have been started by an E-Card company who saw notice of a Cracker Day in a given county in Florida, and not investigating it, though it was cracker the crunchy biscuit day.

Here’s a Cracker Day held on the last Saturday of April each year in West Volusia, Florida.

Take time today to learn on CooksInfo how crackers came about. How’s a cracker different from a biscuit? What exactly is a saltine? A water biscuit? And exactly what was a Cracker Barrel?